Qualcomm has just announced a slightly souped-up successor to the Snapdragon 730G. The new 732G sports a faster 2.3GHz maximum clock on its so-called "Prime" cores, and somewhat enhanced GPU performance. It might only be an incremental improvement (as its model number implies), but an as-yet-unnamed POCO phone will be "globally" powered by the upcoming chip.

Details are sparse, but we're told the 732G otherwise has the same specs as the 730G. Outside that 100MHz bump on the Prime core and undefined GPU improvements, that means it's an 8-core chipset with support for up to 8GB of RAM, the Snapdragon X15 LTE modem, and packing Qualcomm's Hexagon 688 DSP and Spectra 350 ISP. It also offers "select Qualcomm Snapdragon Elite Gaming experiences" — a marketing-heavy way of saying that Qualcomm provides some extra tools for developers to improve game performance and quality on its hardware, with things like "Game Color Plus" and "True HDR" support.

As an incremental bump, there's no new modem or 5G support here. While Qualcomm claims up to 800Mbps down with 3x carrier aggregation and 4x4 MIMO, you won't be gaming on a super-fast mmWave 5G connection — no real loss. 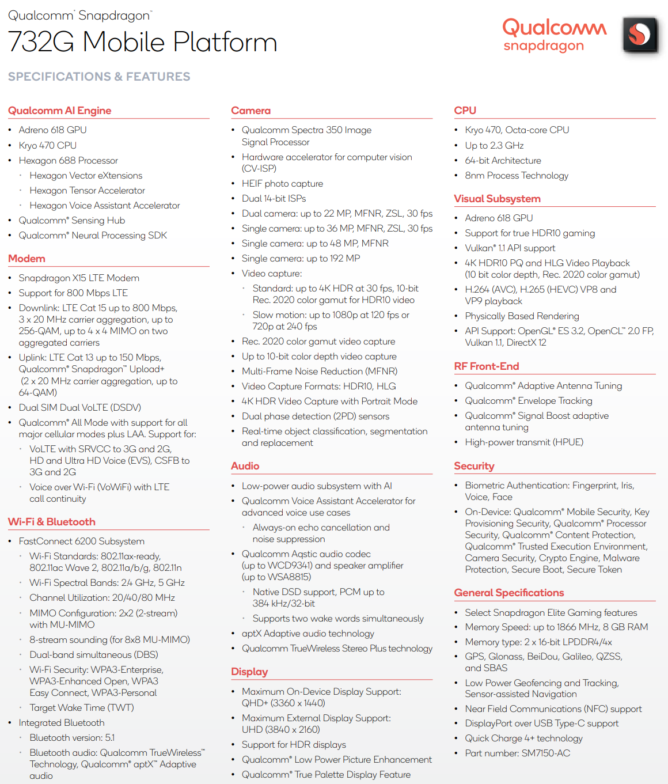 It remains to be seen how much faster the improved Adreno 618 GPU in the new 732G is. Although Qualcomm promoted the 730G as its first-ever "gaming" chipset, actual GPU performance was somewhere on level with the 2016-era Snapdragon 820. While we found the 730G to be a great chip in the recent Pixel 4a, gaming performance is lacking compared to the company's more recent high-end 800-series chips. Perhaps the extra oomph in this new version will make a difference for that new POCO phone.

Again, there's not much we know about it yet, but Qualcomm promises that the chipset will be included in a "new POCO smartphone." Another quote, claiming the phone will be "powered by the enhanced Snapdragon 732G globally," seems to imply (but not outright state) global availability for the upcoming phone, which would be a first for the company; POCO phones haven't been sold in the US yet. POCO executive Sam Jiang also chimes in, claiming that it will have "the first device on the market with the latest Snapdragon 732G Mobile Platform," and that the new chip will "set a new benchmark in the mid-range category."

When it comes to smartphone gaming, high-performance GPUs are still exclusive to flagship-grade parts, and I doubt that the clock bumps on this incrementally improved version of the 730G will change that. But the 730G is still a good mid-range chip with decent GPU performance for some light-duty gaming, and I expect the same from the new 732G — and whatever new POCO phone it ends up in.