Just a few days ago, Hangouts users saw a number of mysterious "FCM Messages" test notifications, and now Microsoft Teams is exhibiting the same issue. The two incidents are likely linked, as they're connected to a recently published vulnerability in Google's push notification service Firebase Cloud Messaging (hence "FCM Messages"). Ultimately, the messages appear to be harmless (if annoying) for users, so you don't need to worry about the safety of your account or phone.

The test notifications first surfaced en masse at about midnight PST, with many people taking to Twitter, Reddit, and the Microsoft Community to complain about them or make fun. All of them seem to have received the same message from "FCM Messages" that states "Test Notificationsss!!!!" Other than that, nothing worse seems to have happened. 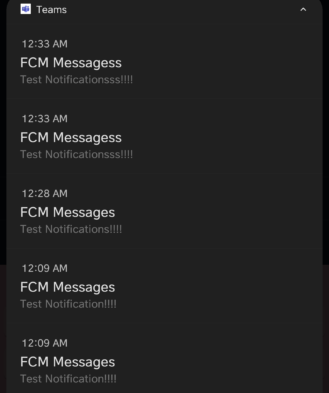 It's unclear whether these notifications were sent by hackers curious to see how far they would come or if they're part of an effort by Google to eliminate the vulnerability. Either way, the notifications themselves should be harmless — the vulnerability apparently only affects Google's notification service, not user accounts or devices. Let's still hope that Google figures out a fix sooner rather than later — I don't think anyone wants to be woken by the sound of unnecessary notifications in the middle of the night.

Microsoft has managed to put a stop to the rogue FCM notifications that have been affecting Teams.

We've isolated the source of the issue and applied a mitigation. We've confirmed that no further unexpected notifications are being sent to users' Android devices. Additional details can be found in the admin center under TM221041.

OnePlus Watch is reportedly in the making