Asus landed a surprise hit with the Zenfone 6 last year, combining a clean build of Android with an affordable price tag and a unique flip camera. This year, the company wanted to build on the momentum it gained with its special device and went all-in on its custom camera arrangement with two new Zenfone 7 devices, both now housing three lenses. The upgrade to a 90Hz AMOLED panel is also more than welcome.

This time around, Asus has two devices in its lineup: the regular Zenfone 7 and the Zenfone 7 Pro. There are only some small differences between the two, and none of them are truly apparent from the outside. The Zenfone 7 has a Snapdragon 865 as opposed to the 865+ in the Pro variant, less RAM, less on-board storage, and no OIS — everything else is the same.

Both Zenfone 7 phones have a clean and understated back apart from the massive camera array complete with its flipping mechanism, now home to three lenses: a 64MP primary Sony camera, a 12MP Sony wide-angle, and a 3x zoom 8MP telephoto. The motor is rated for up to 200,000 flips, double the amount of the Zenfone 6. Underneath the back glass, a halo effect makes a green glow appear on the black version, depending on how light falls in. The Asus logo is as prominent as it can get, but that's a matter of taste.

On the bottom, you'll find a USB-C port, a speaker, and a notification LED while the top is left free for the flip cameras. The right side of the phone houses the volume rocker and the power button with an integrated fingerprint reader. Looking at the front, you're greeted by an uninterrupted 6.67-inch FHD+ Samsung AMOLED display with an aspect ratio of 20:9 and a refresh rate of 90Hz (which is quite an upgrade from last year's smaller LCD screen). There's no notch to be seen anywhere, though the bottom bezel is a bit bigger than the one on the top. When you turn on the display, you're greeted by Android 10 and Asus's lightweight ZenUI 7.

Both Zenfones have the same 5,000mAh battery we know from the Zenfone 6, though the unique camera setup coupled with that huge battery forced the company to make some compromises: There's no wireless charging and no waterproofing certification. A headphone jack is also missing from this year's phones. 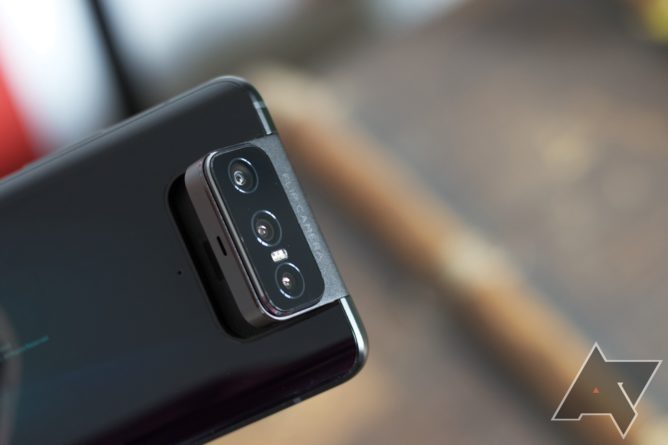 Unfortunately, the Zenfone 7 won't officially make it to the US as it doesn't support 5G bands in the country. You can still import it and use it on 4G networks, though, which will probably be a viable solution if you're interested — 5G still isn't an absolute necessity these days.

International prices haven't been fully announced yet, either, but Asus has shared that the Zenfone 7 will cost NT$21,990 (about $750/€630) in Taiwan, and the Zenfone 7 Pro will go for NT$27,990 (about $950/€800). It looks like the Zenfone 7 is not quite the bargain the 6th generation used to be, but if that's the international price, it's still very aggressive compared to Samsung's latest flagships, especially when you look at the entry-level Zenfone.