Over the better part of the last week, we've been investigating the curious case of the Pixel 4a and Google's Playground app. Interestingly, while the Pixel 4a ships with Playground pre-installed, the feature isn't actually available in the built-in camera app, as it is on other Pixel devices. According to Google, that's intentional, and while Playground will continue to be supported on previous devices, Google is moving beyond the app with its future AR experiences.

You might remember Google's AR Stickers app, which landed for Google's original Pixel and Pixel 2 back in 2017, and was all the rage when augmented reality first reared its head on mobile, delivering 3D animated AR Stickers — and, later, more refined "Playmoji" — that you could drop into your camera's viewfinder and interact with. Ultimately renamed Playground, Google built short-lived partnerships with Marvel, Childish Gambino, and even The Pokémon Company, though they have all since fizzled out. Now the app is really only useful for parents hoping to distract their kids (and the AR characters work pretty well for that, too).

Some of our readers that picked up Google's latest Pixel 4a expected it would also support Playground, since prior Pixel models, including the 3a, did. But although the app is pre-installed, Playground itself doesn't actually appear anywhere in the Google Camera app. Strange, right?

No Playground here on the Pixel 4a.

When we reached out to Google for information, the company provided us with the following details last week, later refined into an on-the-record statement:

"We’re continuing to bring ARCore and its latest features to Pixel 4a and the many other ARCore-enabled devices. Playground will still be supported on earlier Pixel devices and we’ll focus our efforts on building great AR experiences that serve a much wider audience."

Those following along at home might be a little confused by this. Why would Playground ship on the Pixel 4a when Google is claiming it's only supported on earlier devices? Turns out, there's a bit more to the story. First, we need to talk about ARCore.

For those that are unfamiliar, ARCore is the software behind apps like Playground, giving developers an easier system to build augmented reality stuff without starting from scratch. But it's used in more than just apps. Unless you've lived under a rock, then you're familiar with the snazzy AR results appearing in Search these days for things like animals, chemistry models, and cell diagrams. 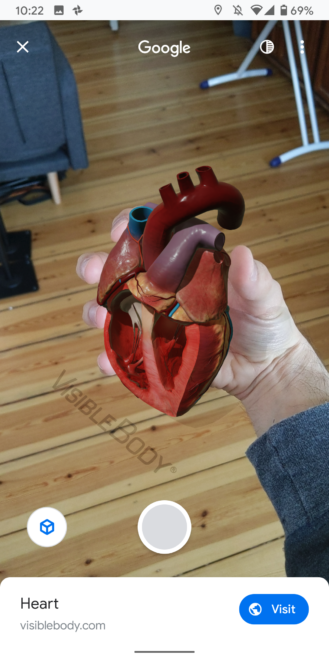 AR science education from your search results — courtesy of ARCore.

Google tells us these other ways of accessing augmented reality ARCore experiences are more accessible to customers compared to the Playground app, and they're not wrong. In terms of discoverability, you can't really do much better than Search itself. To that end, Playground's time has come.

Google tells us that the Pixel 4 will be the last phone with the "full" Playground experience. The company will continue to support Playground on previously supported devices, though, and Playground-like augmented reality experiences will be delivered via ARCore through other means in the future. Although the Pixel 4a still ships with the Playground app pre-installed, it's better to think of it as a support library for other camera functionality on new Pixel devices going forward. The company has moved past the app for its AR experiences.

LineageOS 17.1 adds support for Pixel 3, ROG Phone 2, and others

Tom and Jerry: Chase looks like an excellent homage to the classic cartoon, out now in select ...