The new flagship product from Fitbit boasts the world's first electrodermal activity (EDA) sensor on a smartwatch to measure your stress levels. You'll be given a score out of 100 for how stressed you are, and this will be accompanied by plenty of mindfullness exercises to help you relax a little. It also has ECG functionality, although that's subject to FDA clearance in the US and regulatory approval is also pending in other markets. Other metrics such as heart rate, skin temperature, breathing rate, and oxygen saturation are also tracked, making Sense one of the most fully-featured health wearables around. Sense promised more than six days of battery life on each charge, although it's not clear if that's with 24/7 monitoring turned on and includes sleep tracking — we'll have to wait and see. Other useful features include GPS and 50m water resistance. The Google Assistant (or Amazon Alexa) is also on board, and the watch can display notifications for various apps. The Fitbit Sense's frame is constructed from stainless steel, which not only gives it a premium look and feel but is also used as an electrode for its ECG capability.

At $329.95, Sense is Fitbit's most expensive smartwatch yet. It comes in lunar white/soft gold or carbon/graphite. Additional bands start at $29.95. Pre-orders are live now on Fitbit's site.

Almost indistinguishable in looks is the upgraded Versa 3, which features built-in GPS for the first time and the same advanced heart-rate tracking technology as the more expensive Sense. Oxygen saturation monitoring is also included, as is the choice of Google or Amazon for voice assistant duties. Six plus days of battery life is also promised, but 12 minutes of fast charging apparently enough for a whole day of juice. Like the Sense, Versa 3 also comes with a new Find My Phone app which could come in very handy. 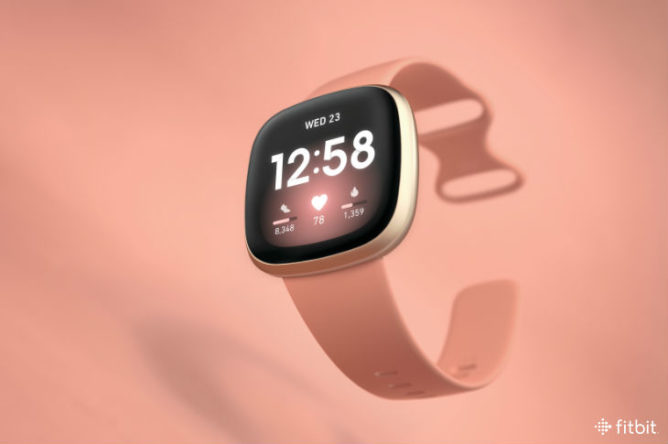 You can take wear Versa 3 in the pool without issue, as 50m water resistance has you covered. Versa 3 is available right away from Fitbit.com or various other retailers, costing $229.95. Color options include black/black aluminum, pink clay/soft gold aluminum, and midnight/soft gold aluminum.

The least interesting/most affordable of the new Fitbit lineup is the Inspire 2, a much more basic fitness tracker with a smaller screen and fewer features. It still offers continuous heart-rate monitoring, 50m water resistance, sleep tracking, and Active Zone Minutes, so it's still well worth it if you don't need all the bells and whistles. It'll be available from September 25 at a price of just $99.95 — pre-order it now on Fitbit's site. Purchases of the Sense and Inspire 2 come with a free trial of the updated Fitbit Premium subscription, which offers further insights into the data collected by each of the devices and can help you make healthier lifestyle choices. If you sign up for the Health Coaching add-on, you'll also get one-on-one support from an expert health coach.

If you want to customize the look of your new Fitbit, two new designer collections — in collaboration with Victor Glemaud and Pendleton Woolen Mills — offer up some stylish wristband options.

Live Caption on phone and video calls now working on Pixel 4a, 4, 3 XL