ASUS’s big flagship launch for the year is just around the corner. But two days before the company will officially take the wraps off its ZenFone 7 series, a couple of leaks have popped up to reveal what at least one of the upcoming models is going to look like. That nifty flip-up camera from last year’s ZenFone 6 looks set to make an appearance once again to give the phone a clean, notch-less front.

The Zenfone 7 branding was already confirmed by ASUS, but these photos offer up a few more details about the upcoming device. Most notable of all is the triple camera system housed within the flip-up module, up from two sensors on its predecessor — the housing looks a little broader to make up for the extra lens. The phone’s back in these images lacks a capacitive fingerprint reader, indicating a likely switch to an under-display solution considering there’s no mechanism for facial recognition. If that’s indeed the case, the ZenFone 7 will have to move from LCD to OLED. Another leak shows off the ZenFone 7’s alleged retail box which reveals some of its key specifications (below). The handset will unsurprisingly use the Qualcomm Snapdragon 865, which means it will be 5G capable. This particular variant (ZS670KS) will have 8GB of RAM paired with 128GB of storage. The ZenFone 7’s FHD+ display will measure 6.67 inches diagonally, and the three cameras are listed as 64MP, 12MP, and 8MP. Although we don't know what each of those will do, the ZenFone 6 had a 48MP main sensor with a 13MP ultrawide, so the additional lens will hopefully be of the telephoto variety. 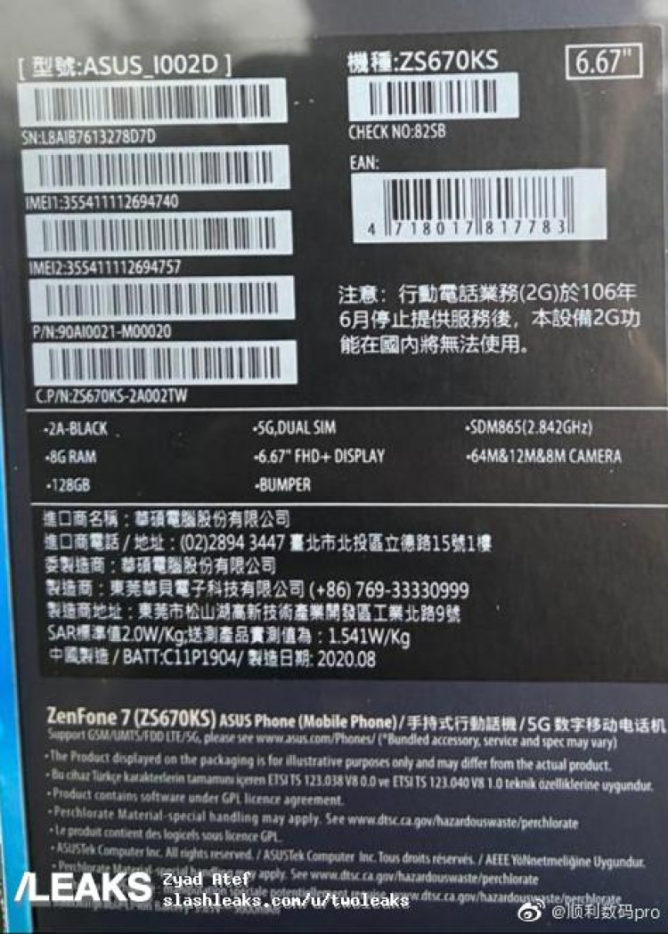 ASUS is hosting its event on Wednesday in Taiwan, where the ZenFone 7 and other models in the series will see the light of day.

Android 11 requires apps to restart upon getting permission to install APKs, but you likely ...