New Android releases always bring exciting new features to the table, but every once in a while, a beloved feature gets reworked or removed altogether. That's no different for Android 11, which made it more cumbersome to grant apps the permission to install APKs, requiring a restart of the application in question up until at least Developer Preview 4. While that requirement is still present on more recent builds, the situation is now slightly improved: when apps are programmed correctly, they'll restart the latest activity, making the experience as smooth as possible.

On Android 10 and below, the process was as simple as it could be: When you want to install an APK from a browser or another app like our own APKMirror Installer, you would be asked to grant the install permission. Once you flipped the switch and hit the back button or gesture, you're taken right back to where you were before, with a dialog asking if you'd like to install the APK you've previously selected. As you can see in the screenshots below, the app you've just granted the permission remains in view and is waiting for you where you left off before it sent you to the dialog. 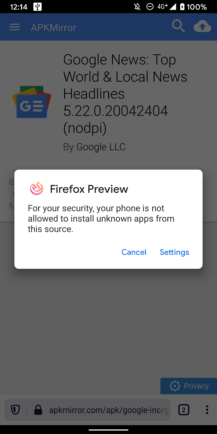 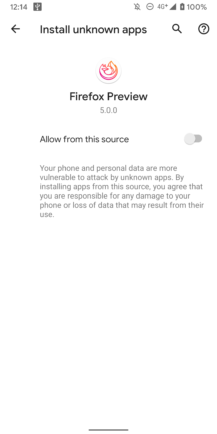 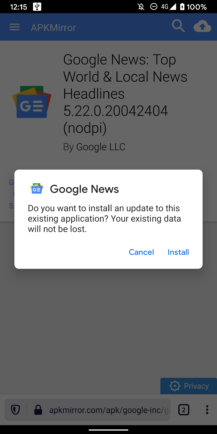 The install process on Android 10 takes you right back to where you were before; no app restart necessary.

This behavior has changed on Android 11 up until at least Developer Preview 4. As disgruntled testers report on Google's issue tracker, the install dialog still popped up after granting the permission, but the app itself was gone — you'd see your launcher in the background. When you opened the application in question again, you'd notice that it's fully reloaded, with potentially lost input or other yet-to-be cached data, as it was killed by the system.

Behavior on recent Android 11 builds: The app is restarted in the background.

This restart requirement still exists in more recent Android 11 builds, but now you're not thrown to the launcher any longer. Instead, apps recreate the last activity behind the install dialogue. At worst, you might see your browser reloading the website you're currently visiting in the background, but once you've hit the install button, you can go back to what you were doing right away.

Behavior on earlier Android 11 builds: Note the disappearing app, throwing the user back to the launcher instead.

Googlers were initially rather tone-deaf on the issue tracker, only stating that "this is in fact working as intended." Only after commenters kept digging in, expressing how this could break apps that don't expect to be force-stopped in the middle of an operation, Google provided further comments, making clear that the change is related to the new Scoped Storage file management:

The way the filesystem and storage mounts are setup in Android R has changed significantly. When an app starts without this permission, it gets a view of the filesystem that doesn't allow writing to certain directories (eg Android/obb). Once the app has been granted this permission, that view is no longer accurate, and needs to be updated to a view that allows the app to write to certain directories. With the way the filesystem has been setup in R, changing that view on the fly is not possible. As mentioned in comment #16, we're evaluating internally. I'm just providing additional details why this doesn't work the way it did on Q.

While Scoped Storage will benefit security and privacy, the new system apparently leads to more significant changes than anticipated. While the fix doesn't prevent apps from restarting, it makes them behave as interruption-free as possible. It's a compromise, but with the new behavior, most people probably won't even notice the change in their day-to-day use, and even if you do, once the permission is granted, you won't experience another restart.

Updated with Android 11 changes that automatically recreate the app that has to be restarted to grant the APK install permission.