Samsung Internet only recently got a big release that gave it third-party password manager autofill support and a new Chromium engine, but the developers are already hard at work on the next feature update, version 12.1. The browser's current beta adds a new grid view to the tab switcher, giving it almost the same layout Google Chrome is currently testing for many people. 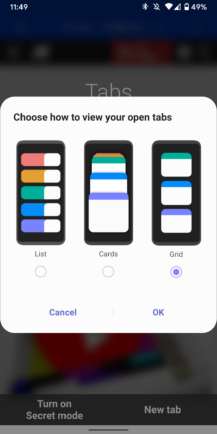 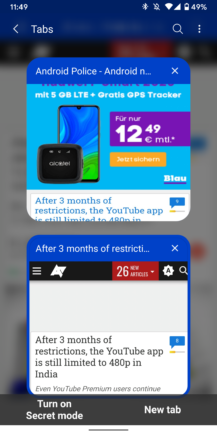 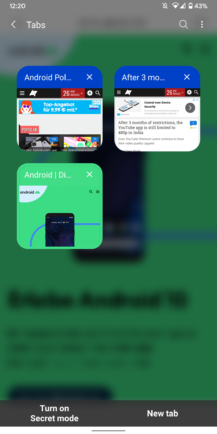 When you first open the beta after updating or downloading it and hit the tab switcher button, you're greeted by a prompt asking you how you'd like to view your tabs: List, cards, or grid. The grid is the new one among them. Depending on your display size or the density you picked in your system settings, you'll either see them as big, card-like squares showing you two tabs at a time or an interface with two tabs next to each other, displaying up to six website previews at once. The latter only shows up for me when I choose a less dense display size in system settings on my Pixel, though this might be different for Samsung phones. This behavior could also still change before the new view goes stable. As known from other UI elements in Samsung software, you can swipe down to get the top tabs closer to your thumb.

The changelog also mentions the addition of a context menu to the tab bar, which you can activate in settings under Appearance -> Show tabs below address bar. It's now possible to long-press these tabs to make said context menu appear, giving you options to close all tabs, close other tabs, and pin or duplicate the current tab. 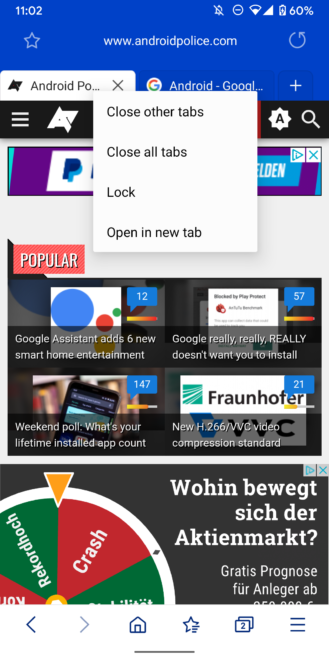 In a blog post, Samsung mentions further additions. Tablets have received a new layout options, letting you move the toolbar to sit next to the address bar, which makes the browser behave more like one you find on a desktop. When you're watching a video on the Z Flip, you now have the option to view the video on the top half of the screen and get your controls on the lower half.

You can get the latest beta release on the Play Store or over at APK Mirror. The current version has been available since the end of June, but Samsung has only now published the changelog, which pointed us to the UI change.

Updated to reflect the changes to the tab bar, tablets, and the Z Flip.

Rolling out to stable

Samsung Internet 12.1 is now rolling out to the browser's stable release channel. You can download it from the Play Store widget below, or grab it from APKMirror.

Galaxy Z Flip receives update to One UI 2.5 with some Note20 features