Not long ago, 2K Games and Aspyr Media released a full port of Civilization VI for Android. While it took over two years longer to arrive than the iOS port, it was definitely worth the wait. Not only is Civ VI for Android fully functional, it's a rare PC to smartphone port that really, really works. And it's now one of my favorite smartphone games.

I wasn't a massive fan of Civilization VI when it was first released in 2016. Much like its prequel when it was released, Civ VI had issues with game balance and AIs. I was also annoyed I couldn't build up a city quite as quickly as I could in Civ V, nor could I generate in 500+ gold per turn with almost no effort and purchase armies en masse.

However, Civilization VI has become my most frequently-played game during COVID season. At least a few times a week for the past two months, I've played Civ with fellow Android Police writer Jules Wang and Zachary Wander of XDA Developers. Game after game, I'm still not quite worn out of it — there are half a dozen ways to win, and enough customizable settings to turn Civ into a different experience each time. After I finally caved in and purchased the various expansions and DLC content, 2K has provided me with yet another way to spend money: Civilization VI for Android.

If you've never played Civilization before, it requires a bit of explanation. You start off in a mostly-unexplored world, with only a settler (to make a city with) and a few other scouting or military units. From there, you settle a city, build buildings and districts in the city, create more units, settle more cities, and so on. While all this is happening, you must research technologies, maintain a sizable military, and possibly create a religion.

You're not operating your civilization in a void, though — there are other empires also building armies, inventing chemistry, and vying for the world's attention with world wonders. Diplomacy is a critical component of Civilization. Each leader has their own desires and motivations that impact trade relationships. If you upset an empire, possibly by spreading your religion in their land or by winning the affection of their city-state partners, it could lead to war.

There are six ways to win Civilization VI. You must either establish a colony on Mars (Science), attract more tourists than any other empire (Culture), conquer the original capital of every other civilization (Domination), spread your religion until it's the dominant belief in every empire (Religion), or simply have a better score than everyone else by the time the game is over. The Gathering Storm expansion adds one more victory method: Diplomacy, where you achieve a certain number of points through the World Congress.

Speaking of expansions, there are two primary add-ons for Civilization VI that significantly change the game. The first is Rise and Fall, which adds loyalty ratings to cities and Dark/Golden Ages that provide significant bonuses. The second is Gathering Storm, which adds the complexities of natural disasters.

The Android version of the game is more or less identical to the PC port, which is an impressive achievement by itself. There are no removed mechanics or dumbed-down AIs to make Civilization a more casual experience, like the Civilization Revolution series that was already available on mobile platforms. That does mean there's a significant learning curve if you're new to the Civ series, but an in-game assistant is available to help you along the way.

As great as it is to see a real Civilization game on Android, there are some catches. First, this may be the most GPU-demanding Android game ever published. Aspyr has a full list of compatible devices, and right now, it's entirely composed of flagship phones released over the past two years (plus the Tab S6). However, you can sideload the game from APKMirror to try your luck with other devices.

You may also notice there are no Chromebooks on that list. Not including any Chrome OS devices feels like a missed opportunity to me, especially since there's (presumably) keyboard and mouse support in the code somewhere, but perhaps there aren't enough people using high-end Chromebooks to make it worth the effort. I can't sideload it on my own laptops to test because there's no x86-compatible APK.

Even if you have a supported device, Civ VI doesn't run very well. On my Galaxy S20, one of the fastest Android phones available right now, I almost never saw the game hit 30FPS. Civilization runs at 720p by default, but you can change that from the settings menu. Performance will also likely go down a bit during extended sessions as your phone's SoC struggles to keep cool, unless you have a gaming phone with active cooling (like the Asus ROG Phone 2 and its attachable fan).

Civilization VI on the Galaxy S20 with FPS counter

Still, Civilization is a turn-based game where you can take as long as you want to make decisions, so it's still completely playable at sub-30FPS. Unlike with shooters or real-time games, you're not at a disadvantage if your framerate is poor.

The other main drawback is the interface. On phones, you have to navigate through more menus to reach all the controls that are usually always visible on PC. Granted, there's not much the developers could have done here, since there's only so much text you can fit on a smartphone screen at once. You're definitely going to be squinting a lot. 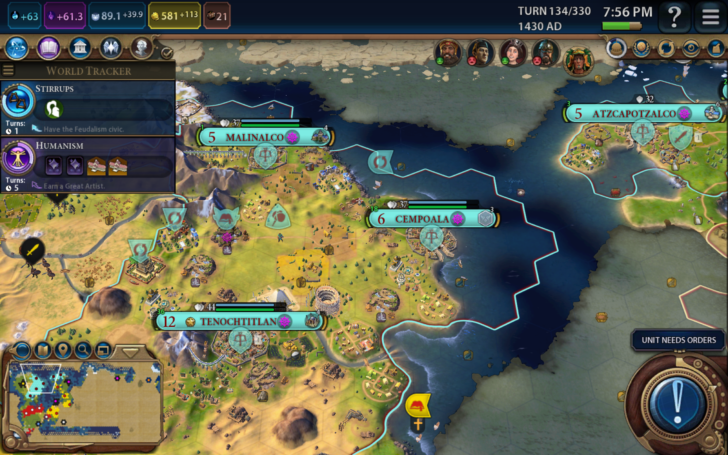 However, if you have a tablet that can run the game, the interface is nearly identical to the desktop version. I've had a lot more fun with Civ on my Galaxy Tab S6 than on my S20, though having the option to play on both is definitely great to have.

Ultimately, if you're a fan of the Civilization series, or you're looking for a strategy game that goes deeper than the typical free-to-play mobile game, I definitely recommend giving Civ VI a shot. It's one of the few games that I can spend hours playing without feeling the need to do something else, mostly due to everything that needs your attention — this is not a "play a podcast in the background" type of game.

You can play Civilization VI for free until you reach turn 60, then you have to pay a one-time fee of $20 to unlock the whole experience. The in-app purchase also enables local multiplayer support with other iOS and Android devices. There are also two expansions available, Rise and Fall ($30) and Gathering Storm ($40), but I'd recommend waiting for a sale before picking those up.

Five changes we'd make to the Pixel 4a