While Android users might be more inclined to go to something like Spotify, Deezer or YouTube Music for their music streaming needs, Apple Music shouldn't be discounted—not least because it's one of just three Android apps that Apple officially makes, and is by far the most significant (see if you can guess what the other two are).

If you've got a lot of Apple hardware in your life besides your Android phone, or if you like the precise library control you get from Apple's desktop Music app (previously known as iTunes), then Apple Music is well worth considering when you're choosing where to spend $10 a month on music streaming. Here are some ways to get the best out of it.

1. Move your playlists over

If you've been using another streaming service before Apple Music and you want to move your playlists over, it's easier than you might think—there are now various apps available to copy playlists between platforms. Two of the best we've found are Free Your Music and Soundiiz, which offer basic transfer functions for free and extra features for a small fee.

2. Get your digital tracks on Android

Subscribe to Apple Music, and its vast streaming library is then available on all your devices (including Android ones). To also get any digital tracks you've imported into the desktop Music app (still called iTunes on Windows), you need to sync your local library to the cloud—the relevant option is under the General tab on the main Preferences dialog.

3. Focus on manual playlists on mobile

Smart playlists work like magic on Windows and macOS, but they're a mess on mobile—both on Android and iOS. They don't sync properly, they don't update properly, and they'll often be different on different devices if you're relying on any sort of key metadata. Save yourself the hassle and focus on manual playlists on Android devices. 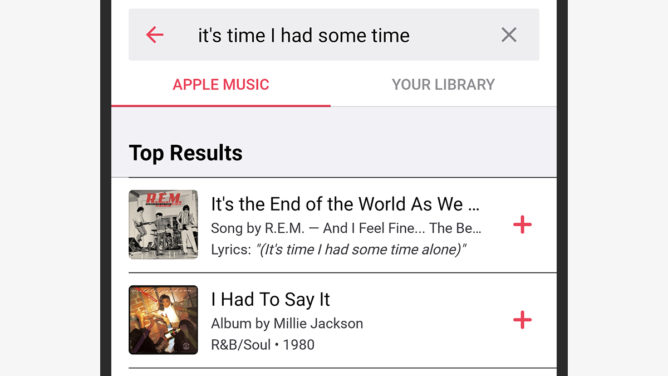 4. Search for songs by their lyrics

As well as running all of the standard searches for albums and artists and songs, Apple Music can also search by lyric—very handy when you're trying to track down a tune that you only partially remember. Tap the magnifying glass icon in the top right corner to run a search, then type out some lyrics to find matches in the Apple Music streaming library.

Like just about every other music streaming app, Apple Music for Android lets you sync playlists locally—very handy if you know you're going to be without Wi-Fi for an extended period of time. Look for the little download icon (an arrow falling out of a cloud) at the top of playlists and albums (tap the circular icon that appears above to see syncing progress).

6. Check up on Apple Music storage

While having locally stored playlists and albums is very useful, you don't want them to take up an inordinate amount of space on your Android phone. You can check how much room Apple Music is taking up from the app itself (Settings then Downloaded Music from the app menu) or from the main Android Settings screen (Storage then Music & audio). 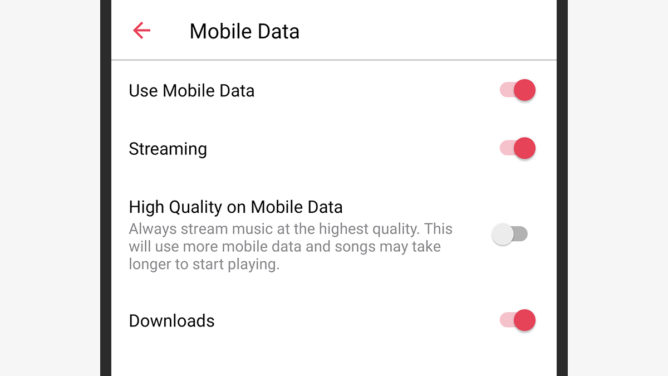 7. Save data while you're on the go

If you haven't synced any playlists for offline listening, you can still make sure Apple Music for Android uses up as little data as possible while on cellular networks. Tap the three-dot icon in the top right-hand corner, then choose Settings and turn on Mobile Data Saver to reduce audio streaming and image download quality. Tap Mobile Data for more options.

8. Tell Apple Music about your likes and dislikes

The For You tab inside the Apple Music app is where you're going to find recommendations for new music that you might like to listen to next—and to make these picks as useful as possible, tell Apple Music your opinion on stuff you're already listening to. On the now playing screen, tap the three dots to find the Love and Dislike buttons.

9. Add to your library

In your wanderings around the Apple Music interface, you'll see the option to add artists, songs, albums and playlists to your library: This makes the selected tracks available in the Library section of the Android app, and means you can download them to your device too. Use it to mark out your own little corner of the vast Apple Music streaming database. 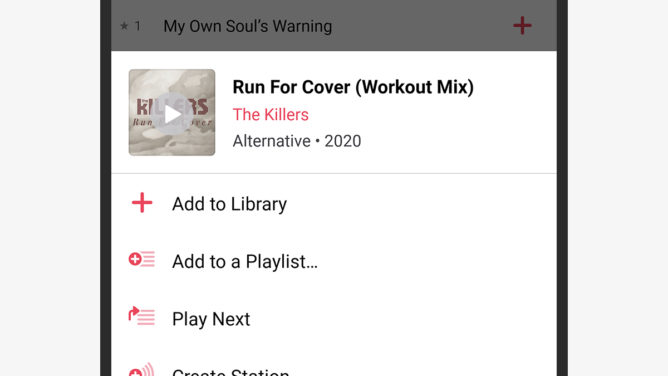 Adding songs from the Apple Music database to your own library also means you can listen to them alongside tracks you've imported into the desktop app from other sources, as long as you're syncing your library across devices (see tip 2, above). From the Apple Music app for Android, tap Library, Songs, and Shuffle to hear your entire personal library.

If you've come across a fantastic new tune that you just can't keep to yourself, you can share it with other people—this only works with songs you've added from Apple Music though, not songs you've imported and synced from the desktop. Long press on a song and then choose Share Song to bring up a URL and the familiar Android share sheet.

Like the other desktop and mobile apps, Apple Music for Android comes with a built-in equalizer that you can use to adjust the audio output—it's useful not just for playing tunes on your phone but also when you've connected it to an external speaker. Open up the app menu and choose Settings then EQ to make adjustments across audio signal frequencies. 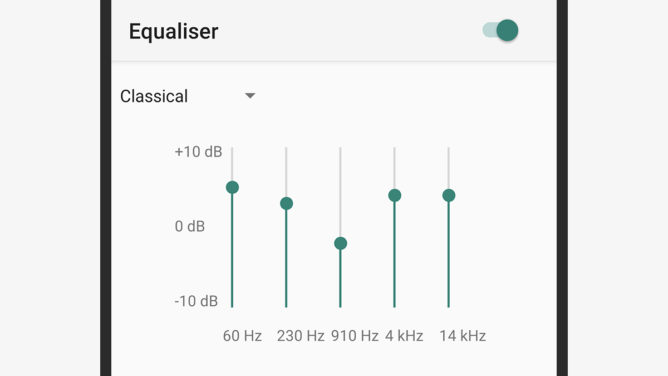 If you're stuck for something to listen to, let Apple Music take over. If you long press on a song in the Android app and then choose Create Station, you'll get an endless mix of music based on your chosen song, most from artists related to the original pick that you haven't heard much of before. The idea is you get your own personalized radio station mix.

14. Jump to albums and artists

To find music, you're probably going to either search for it or tap the Library button to see songs you've already saved. This Library screen can be customized to give you the navigation options you use the most: Tap the Edit button up in the top right-hand corner and you can choose to hide or show Playlists, Music Videos, Genres, Albums and more. 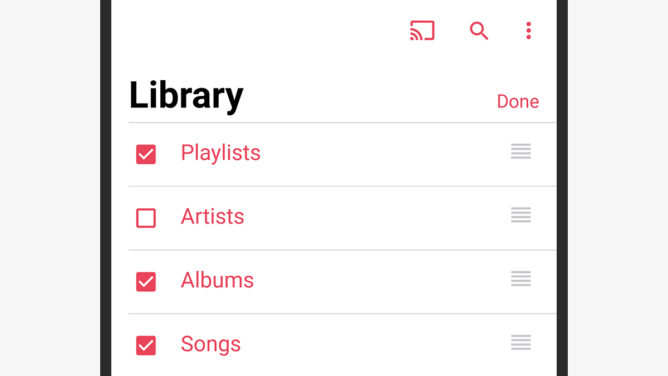 16. Queueing up your music

Different streaming apps take different approaches when it comes to handling the now playing queue. In the case of Apple Music, you can long press on a song, album or playlist to find two options: Play Next, which puts your selection to the top of whatever was coming next in the queue, and Play Later, which adds it to the end of your music queue.

17. Get social with your music

Like Spotify, Apple Music can connect you and your friends together, if you want—with any connected contact you can then see what each other are listening to, and get more listening inspiration that way. On Android, you can turn on this feature via the See What Friends Are Listening To option from the Account section of the main app menu.

18. Change the look of the app

You can use Apple Music in the default light mode, or in a rather eye-catching dark mode, or tell it to follow the lead set by the Android OS itself. Open up the app menu via the three dots in the top right-hand corner, then tap Settings and Theme to set your preference. The master switch for Android as a whole is under Display and Dark theme in Settings. 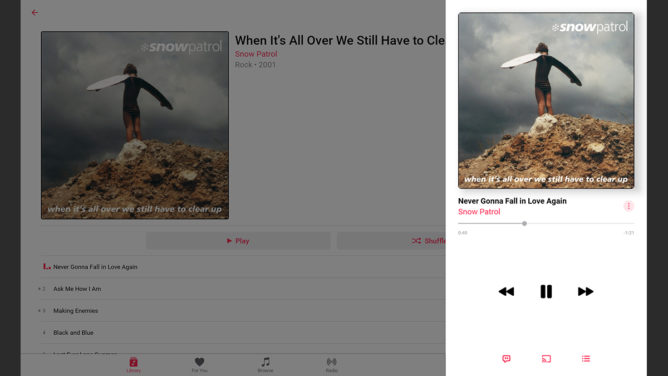 19. Run Apple Music on your Chromebook

While every Chromebook comes with Android app support these days, the quality of the experience varies significantly from app to app. Apple has made the effort to get Apple Music for Android working well on Chrome OS and its bigger displays, making good use of the space (including a now playing pop-up window that appears at the side of the screen).

20. Chromecast from the Android app

You can't Chromecast your Apple Music tunes from Windows, a Mac, or iOS, but the Android app does have the capability: The icon sits at the top of most screens and at the bottom of the now playing screen. If you need to get playlists from a Windows or macOS laptop to a Google Nest speaker, for example, use an Android device as an intermediary.

21. Run Apple Music from the web

Apple Music also has a fairly decent web app to its name, which is another option for your Chromebook (or indeed any other computer). The difference between this and the Android app on a Chromebook is that you won't be able to sync playlists for offline listening, but if you can live without that, you get all the access you need to your tunes through a browser.