Anker-owned Nebula has a pretty extensive projector lineup, and we liked its portable Capsule II a fair bit even though it wasn’t particularly affordable. The brand stepped into a more premium tier late last year with its Android TV-enabled Cosmos range that offered both an FHD and a 4K model. Now the lower-end option is going up for sale in the US, and early buyers can knock 10% off the hefty price tag using a coupon code.

Back in October, when the Cosmos range was a Kickstarter campaign, you could pick the 1080p Cosmos for $429, before any loyalty discount and cashback. The projector is now available for everyone at a price of $800 — a full $100 more than what was proposed last year. However, if you buy the Cosmos in the next ten days, you can snag a decent $80 discount using the coupon code WSCOSMOS on Nebula’s site to bring the figure down to $720 (as shown below). 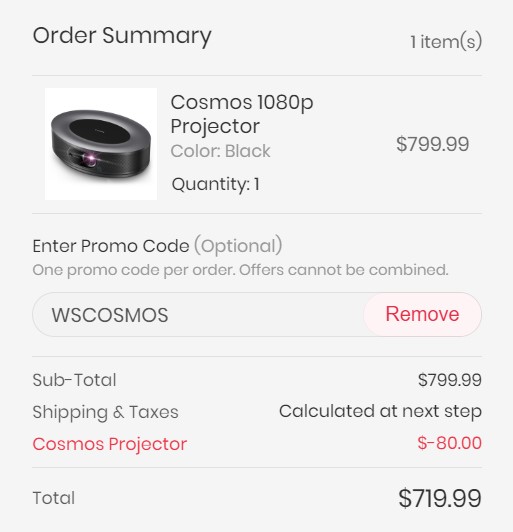 As a refresher, the standard Cosmos comes preloaded with Android TV 9 Pie and supports the full range of streaming apps available for the platform. It’s got Chromecast built-in and Google Assistant, which works using the included remote controller. The Cosmos can take in a range of wired inputs, has built-in 360° speakers, and can even automatically straighten out the picture. The HDR-enabled projector has a much improved 900 ANSI lumens of brightness, versus 200 on the Capsule II.

The Cosmos Max 4K steps up the game in nearly all areas, but you’ll have to wait for it for a bit longer. Its retail price was supposed to be $1700, but that could easily change by the time it actually goes on sale.