Folks using gifted Play Music subscriptions don't need to worry about the unused balance of those gift subs when the service dies in September. Google is apparently giving them double the value (or more) by converting those subs over to YouTube Music while also carrying over the unused portion of those subscriptions into Google Play credit — and the math for that last bit heavily favors the customer.

The news comes courtesy of Reddit, where one customer received an email from the company stating that the unused portion of the Play Music subscription from September forward would automatically be converted into Google Play credit via a gift link, which ultimately was worth $150 for the mere five months of their remaining Play Music subscription. That's a whole lot more than even the $10 a month maximum pricing for Play Music. 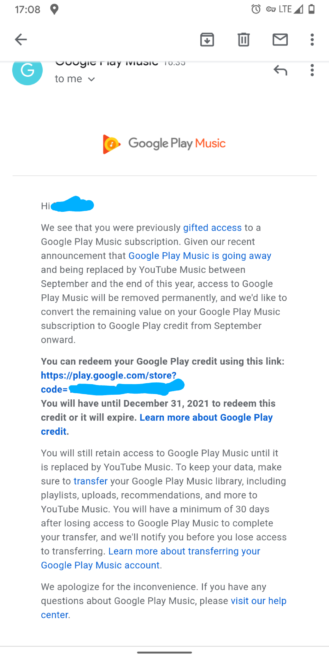 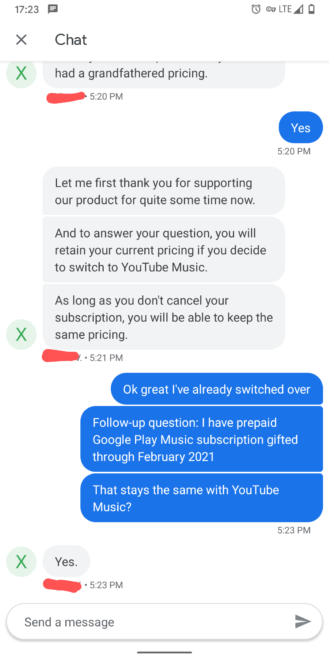 Left: The email from Google to folks with Play Music gift subs. Right: A customer support rep confirms the gift subscriptions carry over to YouTube Music.

In a follow-up chat with customer support representatives, they were also told that the subscription would be carrying over to YouTube Music — entirely separately from the credit received.

As we've known for months, grandfathered Play Music subscription pricing will carry over to YouTube Music, but this is the first we've heard of gifted credit being transferred — a corner-case we admittedly didn't consider, but which is popular among deal-seekers that pick up on gift subscription keys when they're on sale.

We've reached out to Google to confirm both these details. Though the conversion of subs to credit seems official enough in the email that's being sent out, customer support representatives aren't always the best source of information. We'll let you know what we hear.

If you loaded up on Play Music gift subscriptions that you've yet to redeem, now is the time to. And if you can't stack them, consider reaching out to Google's support.

Pixel Buds 2 now available in all colors at Google Store