After a couple weeks of sitting in wait, the Pixel 4a is making its way to pre-order customers. We've heard from our readers about when they should expect to get their phones, and some are already arriving early, up to two days before Google's formal August 20th launch.

Shannon from Indianapolis told us that he ordered two Pixel 4a phones and have received notification that his units should arrive on August 19 or 20 — that's Wednesday or Thursday this week.

Erik sent us their Google Store notification email and it appears that they will be getting their 4a around the same time.

One of our regular correspondents, Shane, tells us that their shipment went out today with an earlier delivery window of August 18 or 19, meaning their phone could arrive as early as the 18th — and in a follow-up, we're told that it did. 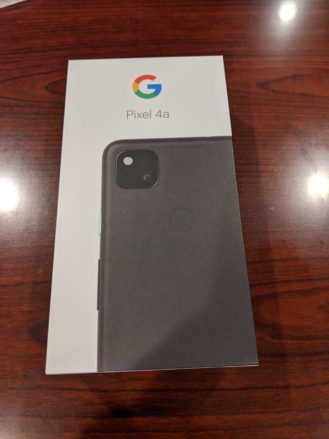 AP reader Shannon reports that two Pixel 4a phones he ordered arrived yesterday in Indiana, not far from Google's fulfillment center. Other reports across social media at venues like Reddit indicate that Pixel 4a pre-orders are also arriving early for others.

Google actually has a long-standing habit of delivering phones for some folks a bit ahead of its anticipated release date. The company did the same for the Pixel 3, Pixel 4.

As a reminder, Google is fulfilling orders for unlocked, Google Fi, and Verizon-locked units right now. U.S. Cellular is set to begin selling its own 4a phones starting August 20.

We thank our readers for sending what they know and encourage you to do so, too, at [email protected].

Our coverage has been updated with additional reports as some pre-orders have gone from shipping early to arriving early.