Here are the basics: the two more entertainment-oriented plans, "Play More Unlimited" and "Get More Unlimited," are now getting Disney+, Hulu, and ESPN+ thrown in for free, with no change in price. However, "Start Unlimited" and "Do More Unlimited" are having their Disney+ trials slashed from 12 months to six. All of the prices are staying the same, so it really just comes down to the changes for each plan. 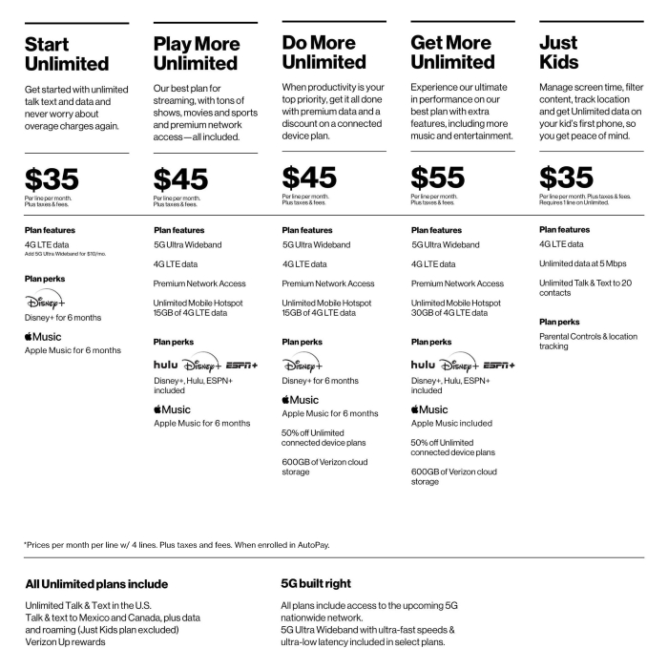 There are some other minor changes that current or potential Verizon customers should probably know about, so for the full details on these changes, keep reading. Also, the prices mentioned here are the advertised figures per line if you sign up for four lines, autopay, and paperless billing, before taxes and fees.

At $35, this is tied for the cheapest Verizon unlimited plan with "Just Kids," which is, as you might have guessed, primarily intended for children. This one is more intended for the general public on a budget. It offers unlimited 4G LTE data (no 5G), and video streaming is limited to 480p. It also comes with Apple Music free for six months.

There's only one change for this plan:

This plan is intended for those who stream lots of music and video. For $45, you get unlimited LTE and 5G, video streaming limited to 720p (an upgrade from the $35 plans), and an unlimited hotspot with 15GB of LTE.

Here are the changes for this plan:

Overall, these changes represent a lot of added value, though Apple Music subscribers who don't stream much video probably won't be too happy.

Verizon says that this plan is for those who have productivity as their top priority. It includes the same unlimited LTE and 5G as the other $45 plan (Play More Unlimited) and the same unlimited hotspot with 15GB of LTE. It also offers six months of Apple Music for free, along with 50% off of tablet or Jetpack unlimited plans.

Here are the changes:

We're guessing most people on this productivity-oriented plan didn't care much for the Disney+ trial in the first place, so we doubt the trial being shortened from a year to six months will really affect many. The improvements that Verizon did make will probably prove more useful.

This is Verizon's flagship plan, offering the most premium features at the most premium price ($55). That means it has unlimited LTE and 5G, 720p video streaming, unlimited mobile hotspot with 30GB of LTE (double the amount in the $45 plans), Apple Music included, and the 50% discount for connected device plans.

The tweaks to this plan are nothing but sunshine. For the same price, you're getting a lot more, with zero downsides.

Verizon markets this plan to young, first-time phone users. It comes with unlimited talk and text — but only to 20 contacts that a parent must approve — and 480p streaming. It also has location tracking, content filters, and the ability to pause Internet access, which are all clearly kid-oriented features.

Here are the changes:

Depending on how much data your kid uses, and whether you're looking at this from the child or the parent's perspective, these changes could be seen as a net positive or a net negative.

These changes will be implemented August 20th, so if you're a prospective Big Red subscriber and any of the "bad" changes above are majorly off-putting to you, you may want to sign up before then. As a whole, though, most of the changes are beneficial to customers, so we don't anticipate much backlash.