A new addition to the Chromium repository, the underlying code ChromeOS is based on, indicates that a flag will be added to enable a "phone hub." The description for the flag says that it "provides a UI for users to view information about their Android phone and perform phone-side actions within Chrome OS." Google is working on adding these new options in the Connected Devices section of the Chrome OS settings page, and the capabilities appear to include mirroring notifications from your phone, as well as something called "task continuation" — intriguing!

Currently, linking an Android phone to a Chromebook will allow you to use Instant Tethering, the Messages progressive web app, and Smart Unlock (when it actually works). The level of integration pales in comparison to Apple's iMessage, AirDrop, and Handoff. Heck, Windows laptops can place calls via an Android phone's Bluetooth connection with Microsoft's Your Phone app. It's high time for Google to put something like this in place for Chrome OS/Android devices.

As Google's developers continue to whittle away on the feature, they've put together a video (spotted by 9to5Google) for what notification mirroring setup process will probably look like:

The workflow looks dead-simple, with a big 'ol "Notifications" toggle under your paired phone's section in Chrome OS's Settings menu. Toggle it and follow the instructions on a prompt that appears, which tells you where to go to enable a second toggle on your paired phone. Once you do that, the process finishes, telling you the feature is enabled. As you'd expect, being one bit of Google software connecting to another, things work on your Phone's end via Play Services, no separate apps required.

We might not have too long to wait before this feature materializes, either. The folks at Chrome Unboxed have spotted that the feature flag for the upcoming Phone Hub is already live in a recent Developer Channel release for Chrome OS 86. When enabled, additional options appear in search on your Chromebook, though the stuff those results ostensibly link to isn't ready yet. 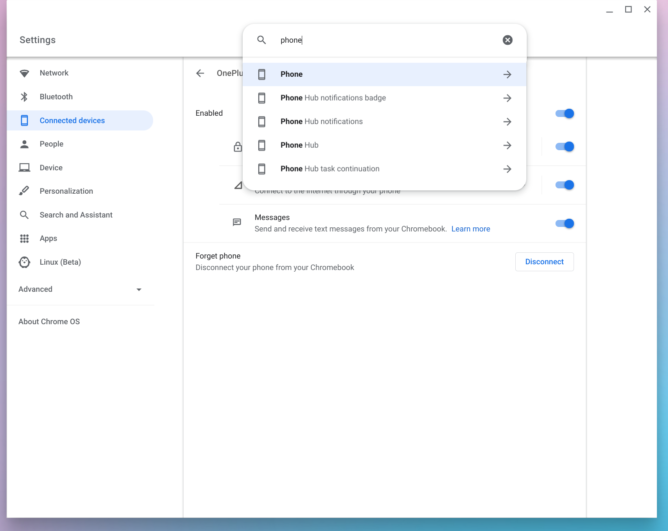 Given the pace of public-facing development and the apparent urgency on Google's part, I wouldn't be surprised to see the Phone Hub features released to stable together with Chrome OS 86, which could be as soon as 8-10 weeks. Time will tell.