Some of us are old enough to remember that Google Assistant first showed up in Allo before launching exclusively on the first-gen Pixels in October 2016. You may also recall that after spreading to more devices, Assistant got its very own "app" on the Play Store in October 2017. Similarly to the Google Podcasts app, it's just a shortcut to the Assistant, the functionality of which remains part of the main Google app. Given the non-essential nature of the app, you'll forgive us for being surprised to see it reach 100 million installs on the Play Store.

100 million unique Google accounts have downloaded or updated the app on an Android device since late 2017. That's no easy feat. To my knowledge, this standalone shortcut app only comes pre-installed on a few Android devices (Nokias), making the number even more impressive. Maybe some users didn't know that the Assistant functionality was built into the Google app, and thus their phones, and thought they needed the app to get it working. Maybe other users found the idea of a homescreen shortcut to access Assistant more appealing than gestures or squeezes or yelling. 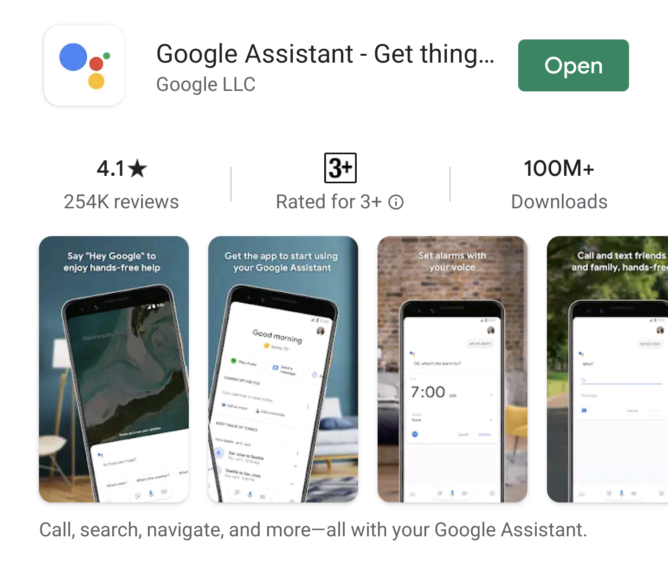 It could also be that millions of users read one of our articles and discovered that having the app allows them to create an app shortcut to directly access Assistant settings, which normally requires many more clicks and navigating in several sub-menus that always change place and name. /s ... but not really.

This is the best feature of the standalone Assistant app.

Anyway, if you've never installed the Assistant shortcut on your phone and have just now discovered its existence and the many benefits it brings, you can grab it from the Play Store link below and add a notch to its 100 million installs, or you can sideload it from APK Mirror and pay us a penny or two in ad views. I'll leave the choice to you.

Happy 4th Birthday, Google Duo! May you live to see the 5th one 😒

New Google Voice bug is fumbling inbound calls for some