While flagships are getting ever more expensive, midrange and entry-level phones are giving us ever better hardware at the same affordable prices. The Xiaomi Redmi 9 is no exception and offers great value at €150 (or ₹10,000 as the Redmi 9 Prime in India). If Xiaomi had invested more in a better processor and less in the heavily-marketed but poorly executed quad-camera setup, I could recommend this phone with no reservations. As it stands, this phone is still a good option for some people.

The Xiaomi Redmi 9 is a great phone if you need all the ports. It offers USB-C, NFC, a headphone jack, dual-SIM 4G, micro-SD card support, and even an IR blaster. It's rounded out by a fingerprint sensor, above-average battery life, and a good enough (but far from great) processor. Xiaomi's latest Redmi phone is one of the best options at its price, and the benefits far outweigh the problems. 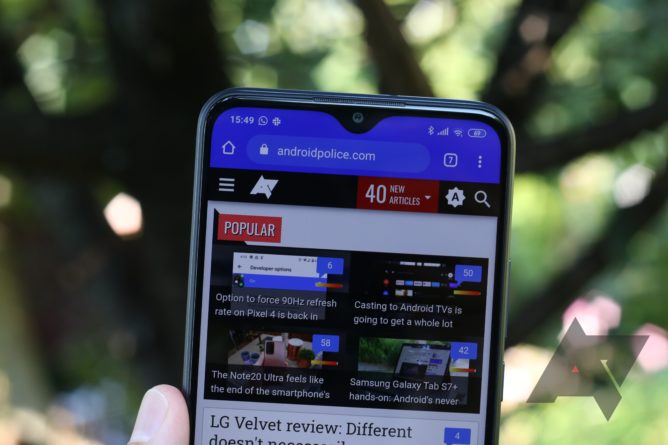 The Redmi 9 is a plastic phone through and through, but Xiaomi went with a neat textured back that makes the phone grippy and hides fingerprints to some extent. The camera array is centered at the top of the back and vertically arranged (apart from the depth sensor and the flash to its right). The bottom of the camera array houses the fingerprint sensor. I was initially afraid I was constantly touching a lens instead of the identically-shaped sensor, but I adjusted and it hasn’t been a problem. 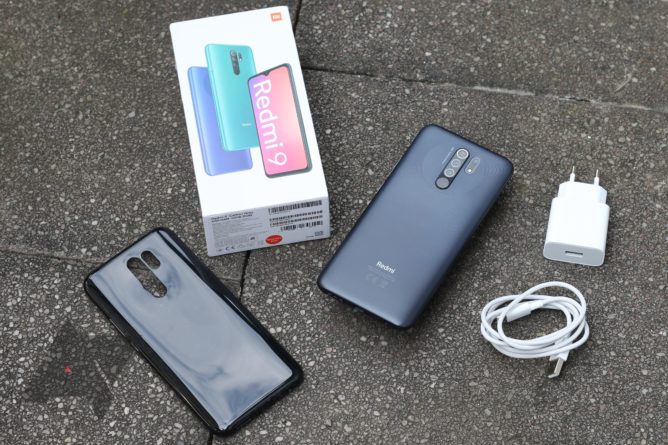 Apart from the usual stuff like a manual and a SIM ejector tool, there's a case and 10W charger in the box.

The back gently curves to the sides, where you'll find the Dual-SIM + microSD slot on the left and the clicky, responsive volume rocker and power button on the right. On the bottom, you'll find a single bottom-firing speaker, a headphone jack, and a USB-C port. The top only houses a microphone and the IR blaster.

When you turn on the 1080x2340 6.53-inch LCD with its pre-applied screen protector, you'll immediately notice the waterdrop front-camera notch. The bottom bezel is slightly larger than the one on the top, but that's not unusual at this price point. While the screen gets plenty bright and has passable color reproduction, it only has a very narrow viewing angle. That means you can't tilt it too far in any direction without dimming the display. Some more corners have been cut: The fingerprint reader could be more accurate, the vibration motor feels mushy, and the speaker is tinny and unpleasant. 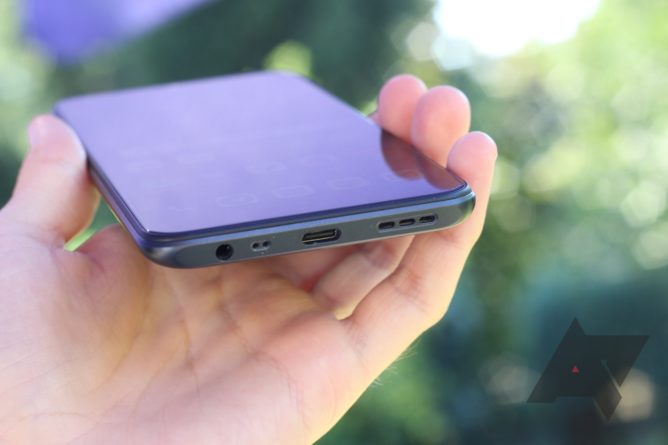 All the ports, but bad viewing angles.

An octa-core MediaTek Helio G80 pushes the pixels, accompanied by either 3 or 4GB of RAM. The 32 or 64GB of internal storage can be expanded via microSD. If you have the extra €20 to spare, I'd recommend going for the 64GB version — 32 won't get you very far these days, and you can't offload everything to a microSD card.

Like many recent Xiaomi phones, the Redmi 9 is running the eleventh iteration of MIUI, but an update to v12 is already rolling out to the Chinese variant. MIUI still looks and feels weird in some places when you come from another Android phone, but it has gotten much closer to stock software compared to our hands-on in 2018. You can configure the navigation button order, add an app drawer to the default launcher, enable notification icons, disable most ads in Xiaomi apps, and completely remove a few pre-installed apps. My European model even ships with Google Phone, Messages, and Gboard rather than custom implementations, and there's Google Discover on the leftmost homescreen. That said, I still ran into a few random app crashes and had some stability issues. Your experience might differ drastically in other regions, too — we've heard of tons of bloatware and way more ads on Indian Xiaomi phones, for example.

MIUI still has its quirks, but it's gotten closer to stock Android over the years.

The MediaTek Helio G80 is far from a flagship processor, which you will notice in everyday use. Heavier applications like Twitter, YouTube, Maps, and the Google Discover feed are janky and laggy, but other apps like Photos, Messages, and YouTube Music run smoothly. Dropped frames and stuttering animations are particularly annoying in Chrome, though, where you'll see plenty of lag when visiting websites with heavy ads.

Next to something like a Pixel, the Redmi 9 is consistently slower, but that's to be expected. As soon as you put other phones away, the rough edges are less noticeable.

While it's a bummer that the G80 doesn't excel at some everyday tasks, gaming performance was surprisingly good. It's possible to play simple games like Alto's Adventure or Odyssey with no hiccups, and while Animal Crossing occasionally drops a frame or two, it's still playable. It's a different story when you try to pull up more intense 3D games like Fortnite or Minecraft.

The 5,020mAh battery provides plenty of juice thanks to the low-power processor and Xiaomi's aggressive MIUI standby optimizations — just remember to exempt always-active apps like Fitbit in Settings -> Apps -> Manage apps -> [your app] -> Battery saver and Autostart. That's dumb, but it's just the way MIUI handles background activities. Even with some exempted apps, I've easily reached 6-7 hours of screen-on time with 30-40% left on lighter days. When I pushed the phone with navigation, photo-taking, extensive web surfing, and more, I still had 20% left at the end of the day. If you're not a heavy user, you can easily use the Redmi 9 for two days without charging, maybe even three. 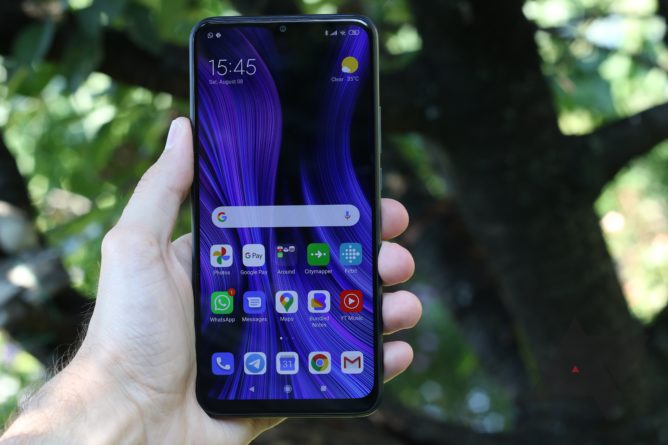 The cameras aren't great, but certainly passable in this price range. The primary 13MP sensor takes good-enough photos when you get plenty of light, though I noticed its tendency to blow out highlights. Low-light performance is understandably subpar. Images start showing noise early on, but that's something all cameras in this price range struggle with. Regardless of light, photo saturation is extremely inconsistent — some shots are unrealistically vibrant and others are flat. If you're someone who hasn't used macro or wide-angle cameras before, you might enjoy the unique perspectives they offer, even if the image quality is lackluster. The 5MP macro lens isn't very versatile and only useful in special circumstances, but at least it has a higher resolution than many other smartphones that just throw in a completely useless 2MP macro to raise the sensor count, including a $700 almost-flagship like the OnePlus 8. The 8MP wide-angle also gives you interesting perspectives, but the color reproduction is even worse than what the main camera has to offer. I imagine most people will stick with the primary camera as it's the most versatile of the lot. It certainly doesn't help that the macro lens is only accessible via the camera's Pro Mode. All this considered, I would've preferred to see a better main shooter instead of the quad-camera setup. 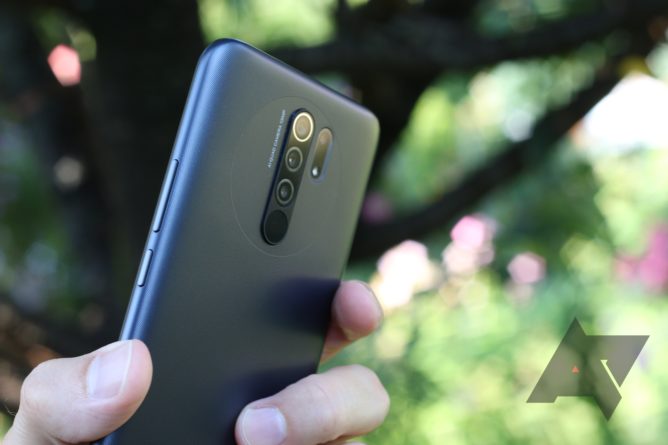 In this price range, yes. If you can shell out more for a Pixel 4a, a OnePlus Nord, or even the iPhone SE, then do that — they have some performance headroom and will probably last you much longer. But if you've set yourself a hard limit of €200 (or ₹10,000), the Xiaomi Redmi 9 is one of your best options. It nails all the connectivity basics and then some, gives you plenty of battery life, and has a passable processor for the price.

The cameras are okay for basic WhatsApp and Instagram image sharing, but they won't wow anyone. I still would've loved to see a better CPU, maybe at the expense of one or two (or even three) cameras. If you're in the US, you might be interested in the similarly priced Moto E 2020, though it doesn't excel on the connectivity and storage front. 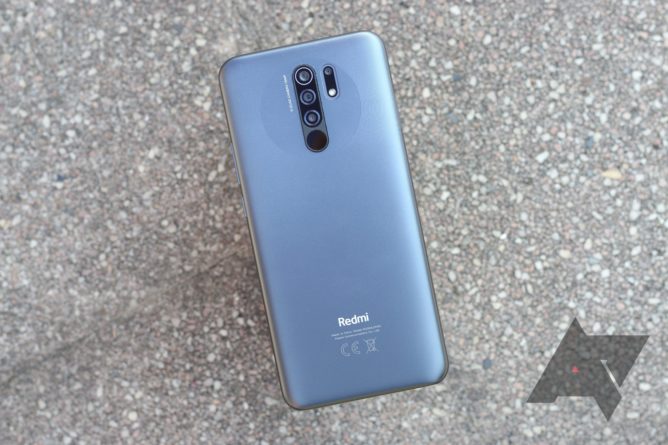