Netflix giveth, and Netflix taketh away. For ages, you couldn't even play Netflix on Assistant-powered smart displays, though that has since been fixed. This small step forward is accompanied by an equally confusing step back, as sometime recently, Netflix lost the ability to do split-window multitasking — even if you forcibly enable it, playback will stop if you interact with a second window.

To be clear, the Netflix app doesn't officially support this at all (as far as we can tell), and by default you won't get the option to use it in split- or multi-window modes on most phones. But, there are ways to force it to work anyway, like toggling the "force activities to be resizable" setting in developer options or using MultiStar on Samsung devices in Good Lock. Some other phones, like the LG V60 in its Dual Screen case, also allow an app to take over a whole screen separately from free-form or split-window mode — frankly, this is all a little inconsistent across different Android devices. 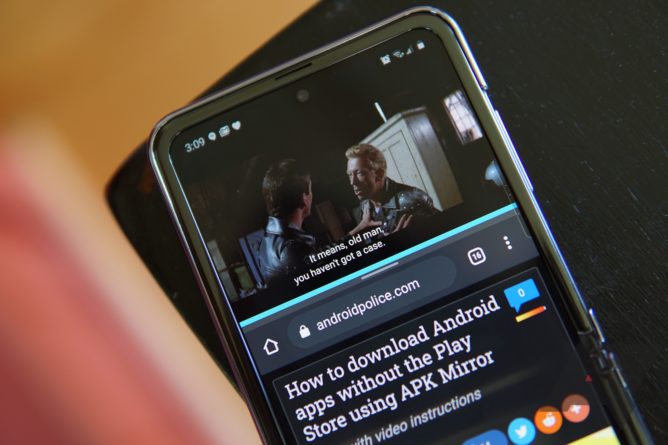 However you got it working, versions of the Netflix app before 7.64.0 were able to accommodate playback even when they lose focus in split-window, multi-window, or multi-display modes. For those that are unfamiliar, Android only really treats one app as fully active or "topmost" and the recipient of the "RESUMED" state. The full technical details here, but in short, one app always gets more attention, and it's the last one you interacted with. In the case of video apps, to work in split- or multi-window mode, they need to have specific logic bundled in that responds properly to losing focus when you interact with another app. That's the sort of thing most apps updated to accommodate back in 2016 and 2017. And for whatever reason, Netflix specifically changed that logic to remove proper support after 7.64.0 sometime in early July.

Though this is only a minor inconvenience on most phones — where split-window video playback isn't a huge convenience, and you can still use picture-in-picture mode — some more recent Android devices like the LG V60 can sport an entirely separate second screen, making them perfect for throwing up a video or movie on a screen by itself. As pointed out by Juan Bagnell, that makes it a pretty huge bummer for owners of those phones.

Bagnell's video also demonstrates how the change behaves, since we can't easily do a screen recording in Netflix.

In our testing, this change appears to have happened following V7.64.0 of the Android app. Rolling back to that version or earlier fixes the behavior (and you can download it here at APK Mirror), but that's a temporary solution at best. Netflix has a habit of eventually blocking older versions of its app from working — probably to protect its content from being easily copied or downloaded, not that it actually makes any difference to piracy.

We've reached out to Netflix to see if this change may have been in error and, if so, what the timeline for a fix might be. In the meantime, folks can either roll back to version 7.64.0 or make do with picture-in-picture.