Google turned its News app into a great resource, making it easy to pull articles from multiple sources and compare what each outlet is writing. But the app also functions as a rudimentary weather hub, offering you an always-accessible shortcut to the current conditions and forecasts at the top of its homescreen in your briefing overview. The developers have now added a severe weather alert tailored to your location, helping you become aware of any potential weather hazards when you need to head out.

If there's severe weather in your area, you'll see a red "ALERT" and an exclamation mark next to the temperature in your briefing. When you tap the weather shortcut, you'll see the forecast as usually, appended by whatever warning has been issued. In 9to5Google's case below, an excessive heat warning has been given out for parts of California by the National Weather Service. Upon tapping the warning, you're redirected to Google.org's Public Alerts and will see a map and more details.

It's unclear if the warnings are currently limited to a few countries only, but it's safe to assume that the US is on board. 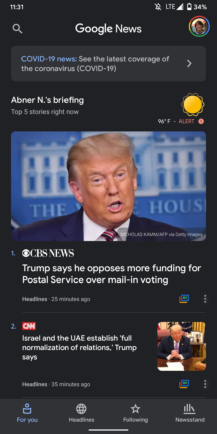 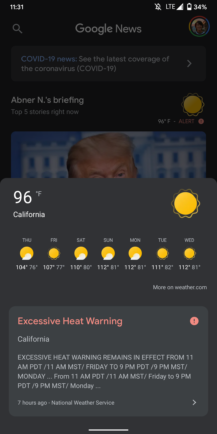 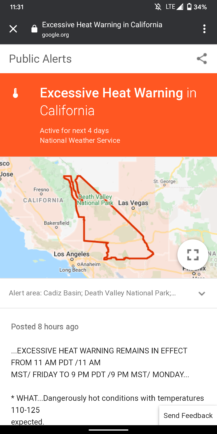 Google first brought that feature to its iOS News app, where it even mentioned what's new in the App Store changelog: "Stay prepared during extreme weather events with alerts and live updates from your area in your briefing."

On Android, the new feature is likely activated with version 5.24.0.20072409, as it's just been published to the Play Store. I wasn't able to test it, as the News app makes it incredibly difficult to change the location it's polling weather from, and there's currently no severe weather in my area. It's thus also possible that the new alerts are rolling out via a server-side switch, but using the current release might help you get in on the change faster.

You can get the latest version via the Play Store or over at APK Mirror.

Spotify optimizes its interface for Android tablets and Chromebooks