Twitter had been teasing the first major update to its API since 2012 for days. On the back of yesterday's major security breach which saw a bevy of verified accounts hijacked for the sake of a Bitcoin scam, the company decided that it would still announce the new API today as scheduled, but would delay the roll-out. Still, all of this has left outside developers wondering what these new tools will allow them to do.

The API allows users to cull posts and associated engagement data from the platform to track trends across multiple social tangents. Feature access was tiered on three levels: free, premium, and enterprise. 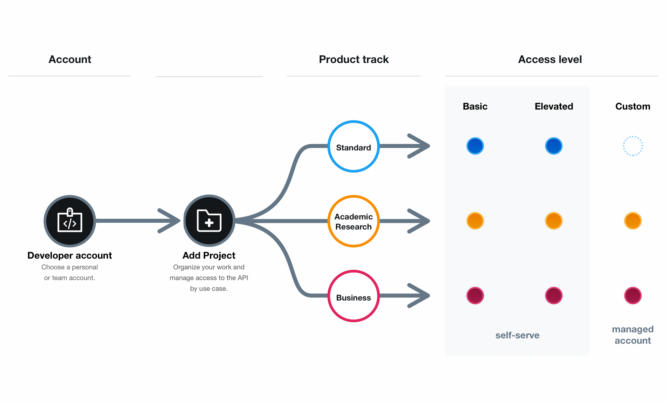 Version 2 of the API will reorganize features into three packages for certain populations — standard, academic research, and business — while paid upgrades will no longer necessitate migrating between different versions of the API. All groups can pay for elevated access to certain tools while academic and business can contract for a managed account with custom data requests.

The social media company has also made public what was formerly a private development roadmap for its API. Some of the first features to come next including an improved streaming timeline experience (as opposed to a call-based one), access to poll information, even more engagement metrics, and an all-new developer portal.

Twitter API v2 is currently in an early access phase meaning that new tools which have just been finished can be used right away. But expect more endpoints to come before the company feels confident enough to deem it a full package.

For what it's worth, Matteo Villa, who develops third-party Twitter client Fenix, isn't quite sure what to make of the announcement, so we'll have to track what changes across apps using the API.

Twitter officially opened up its developer portal for API v2 yesterday, giving collators and third-party apps access to endpoints such as real-time streaming, post performance metrics, event listeners, and more. It hopes to rekindle relationships with its clients after years of closing up features of its former API.

The company is also detailing the roll-out of its new product tracks: the Standard, Academic Research, and Business tracks are out now, but the Elevated and Custom access tiers will need more time.

EVE Echoes is a full-fledged sci-fi MMO, and it's finally available on the Play Store

Google Maps speed limit coverage upgraded in US and 17 other regions, downgraded in 100 others