This might seem like a strange or merely semantic argument to make, but it's been in the back of my mind for months, and I know I'm not the only one that's thinking about it. While some folding devices like the Galaxy Z Flip are clear-cut phones, bigger ones like the upcoming Z Fold2 and Surface Duo straddle a line between phone and tablet — and maybe something else. As foldables have been picking up speed, my opinion has been changing almost daily. 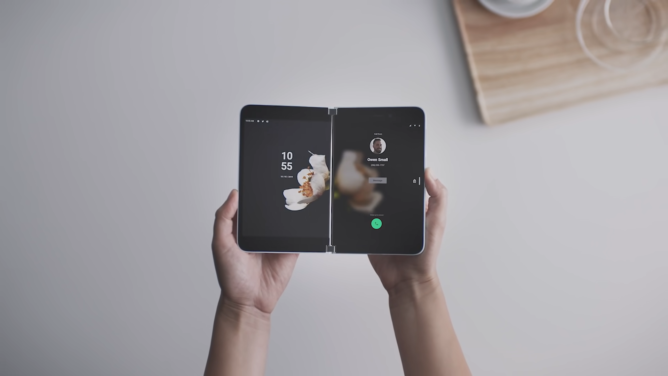 That's not how you hold a phone, but does that mean the Surface Duo isn't one?

I think my own internal confusion started last year when The Verge interviewed Panos Panay (essentially Microsoft's Steve Jobs for hardware, but much more charismatic), and his commentary on the Surface Duo made me stop and consider my own feelings.

"I feel like ‘phone’ is such a limiting word. And then you say, ‘well, smartphone.’ I don’t even know what that means. And then ‘phablet.’ I’m not sure what that is. I think if you’re going to create a new category, you’re going to try to change things, push things forward. The minute you put it in a box, I think you’re lost. So I’ve been pretty resistant to that. Not because it doesn’t act like a great phone."

Part of me honestly assumed all of that was just marketing jibberish at first. "Of course, it's a phone!" I thought, "It goes in your pocket, you carry it around, it has a battery, it can make calls, run apps, etc., it's a phone!" But what are the real requirements for a phone? If you have a super-tiny laptop that can make and receive calls via Google Voice in Hangouts, is that a phone? What about an LTE-equipped tablet that can just barely fit in your pocket?

I'm not sure I have an answer to that question that doesn't draw a bunch of specifically-shaped lines in the sand, loaded with exceptions. But with most definitions, I'd argue the Surface Duo might not actually be a "phone" — or, at least, Microsoft isn't trying to make it into one. If anything, it's a new category, and one that other devices like the Z Fold2 may also fit into.

From the start, Microsoft made it clear that the Surface Duo was made with productivity in mind. It's all about "what you can do on it," with Panay saying during that first formal reveal, "We absolutely know scientifically that you will be more productive on two screens." Paired with the multitudes of software tweaks Microsoft is claiming it will make to enhance work through its own applications, I see the Duo as a secondary device — your work not-quite-phone that you get in addition to a personal phone. Though I should note, Microsoft more recently called a way to "to inspire people to rethink how they want to use the device in their pocket" (emphasis ours), so Microsoft does see it as a primary device of some kind — though it never once calls it a "phone" in its announcement post.

The way I see it as a secondary device, it's kind of a tablet, with a bigger effective screen across its two displays, and a different UI compared to a "phone." But I think it might overly reductive to simply label it a tablet, too, since it can be flipped around and folded up for single-screen, more phone-like use. Of course, that dichotomy brings another name to mind.

Back in the day, we called big-screen phones "phablets" because we had a hard time paring down the actual differences between phones and tablets. But that's a label that eventually went away; No one calls the Galaxy Note 20 Ultra a phablet even though it has a massive 6.9" display, and yet just a few years back anything with a 5" screen or larger got the name.

Ultimately, of course, the label we choose doesn't really matter. Whatever category we apply to the Surface Duo (or other big-screen foldables), it doesn't actually need to be anything other than what it is. Your answer to "What's a phone?" might include the Duo, and it might not. Frankly, I haven't found an answer that I like yet. But whatever the Surface Duo is, I think Panay was right. This is a new category, and we lose something putting it in a box.