The news comes courtesy of an announcement by the Chrome OS team, with the expressed goal of making developer's lives easier. The new ChromeOS.dev site will be a single central location for developers interested in targeting Android on Chrome OS, developing PWAs (progressive web apps) in general, or other Chrome OS-specific applications. (The site itself is an open-source PWA that developers can pick apart by example, and access offline.) 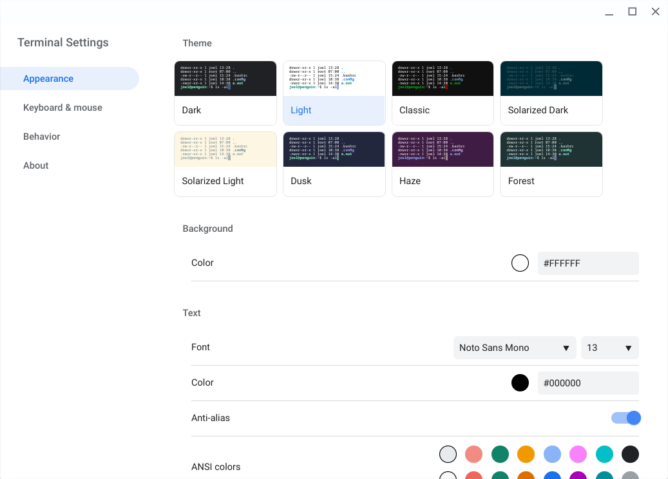 As part of the announcement, Google is highlighting the recent changes to Chrome OS's Linux terminal, which rolled out some weeks ago. The new terminal has theme and customization options, plus support for tabs and standard keyboard shortcuts, all of which should make developers' lives easier.

Genuinely new features are also coming, though, like support for a full version of the Android Emulator on select Chromebooks. Together with Android Studio in Linux and Chrome OS's relatively new ability to sideload apps, developers working from Chromebooks can now do end-to-end Android development. Android Studio has also picked up templates to better suit big-screen devices like Chromebooks, plus better lint checks for big screens — both live in Android Studio Canary.

While most of the news is about developing for Android from Chrome OS, some of the tools at the new ChromeOS.dev site will also help developers targeting the web or Chrome in general, with things like details and guidelines for PWAs and how to better ensure your UI/UX scales well.

Google claims that over a million apps on the Play Store are now optimized for larger screens. While that degree of optimization doesn't seem to approach the level of iOS/iPads, tools like these should help developers better target Chromebooks as a platform — whether that means making sure their Android apps work on Chromebooks or building new PWAs specifically targeting Chrome OS.

While most of these changes don't directly impact consumers, in a couple years, they could indirectly impact the quality of apps and services available on Chrome OS. When you get right down to it, making things easier and better for developers makes things better for everyone.