As smartphones have converged on the "flat glass slab" form factor, companies like Samsung and OnePlus have risen to the top. Sony, on the other hand, has not. The $1,200 Sony Xperia 1 II is the company's latest attempt to sell you a phone, but it feels more like a vanity project for Sony than a viable product. It's got dazzling specifications, but that's not enough to make a phone competitive these days.

The Xperia 1 II is another super-tall 21:9 phone, and it's got ample battery life. There's even a headphone jack and a notification LED. However, Sony chose to use a 60Hz 4K OLED rather than a high-refresh panel, and the camera array has fancy Alpha and Zeiss branding with little of the performance to back it up. And while Qualcomm is charging an arm and a leg for the 5G-equipped Snapdragon 865, Sony chose to give us an 865 without 5G in the US. In every way that matters, the Xperia 1 II is missing the point.

The Sony Xperia 1 II looks a great deal like the Xperia 1 from a distance—it's a very tall, slippery slab of metal and glass, but I did notice a few smart design improvements once I got the phone in my hand. One of my chief complaints last year was Sony's decision to include a side-mounted fingerprint sensor separate from the power button, which just cluttered the edge with controls and pushed the power button too far down. This time, the power button and fingerprint sensor are one, making it much easier to hold the phone without triggering the sensor by accident. There's a volume rocker above the power button and Sony's trademark camera shutter below. The camera shutter is a two-stage button, and it feels more sturdy and tactile than last year's Xperia. The Xperia 1 II is also one of the few high-end phones with a headphone jack. 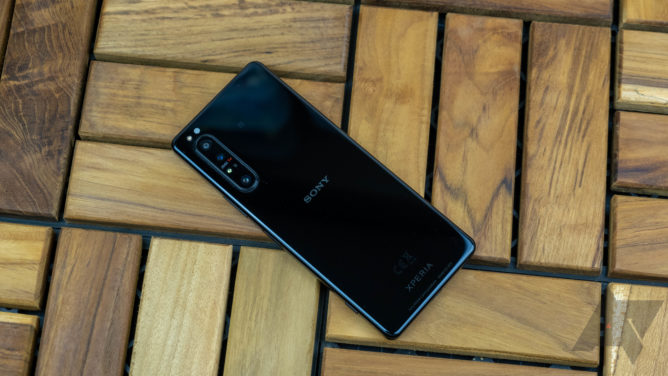 Almost every mid-range or higher smartphone in 2020 has sported a hole-punch or notch, but Sony still believes in bezels. The Xperia 1 II has slim bezels at the top and bottom, allowing room for the sensors and front-facing camera up top. Oh, and there's a notification LED straight out of 2010. There was even space for front-facing stereo speakers.

The display is 6.5-inches diagonal, but it's very narrow thanks to the 21:9 aspect ratio. The good news is that makes the phone easy to hold (for short periods), but it's also nearly impossible to reach the top without readjusting your grip. 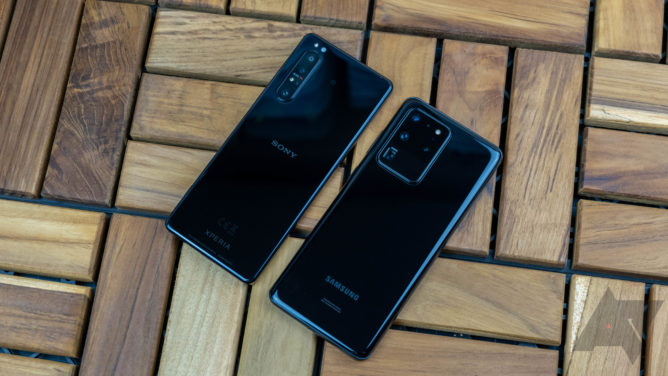 The Xperia compared to the Galaxy S20 Ultra—they're almost the same height.

The OLED screen is 4K (1644 x 3840) resolution, much higher than other phones. Sony likes to crow about that, and it's impressive from a technical perspective. However, 4K resolution does not matter on a screen this small. I said it last year, and it's still true. Don't get me wrong, this is a fine OLED—it's sharp and has accurate colors. However, it doesn't look sharper than 1440p OLEDs, even if you get your face right up next to the phone. It's also limited to 60Hz refresh while many competing phones are now running at 90 or 120Hz. I would have much rather seen a higher refresh screen than a pointlessly high resolution. 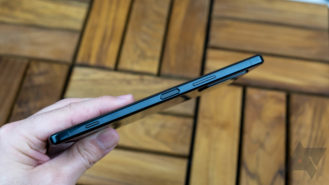 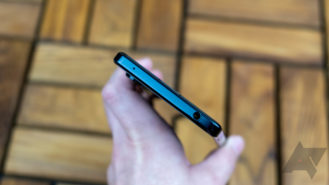 This is by no means a deal-breaker, but it bears discussion: the vibration motor in this phone is not worthy of a $1,200 device. It's weak and sloppy compared to the tight, accurate vibration of something like a Pixel or (to a lesser extent) a Samsung phone. I expect polish for this kind of money, and the poor vibration motor makes me feel like no one paid attention to the little things.

The edge of the phone is flatter than last year's Xperia, but that seems to make it slightly harder to hold. Even if you maintain a tight grip, the phone's mass is enough to make it slide downward. It's not an objectively comfortable phone to use for long periods, but hey, it's not as bad as the Motorola Edge+.

The Xperia 1 II is so slippery that I think you'd be crazy to use it without a case, but Sony doesn't include one in the box. You do get the wall adapter, a USB-C cable, and a pair of cheap wired headphones.

Sony ships the Xperia 1 II with Android 10, and the UI hasn't been dramatically altered. That's always nice to see, but the latest Xperia again proves you can make mistakes even if a phone has what looks like stock Android. Sony even made many of the same questionable software decisions with the Xperia it made last year.

The good news is the home screen looks and works almost exactly like it does on a Pixel. There's a quick search box at the bottom, Google Discover on the leftmost panel, notification dots, and so on. The quick settings and system settings are essentially untouched.

However, Sony also ships the Xperia 1 II with some features that are downright busted, including Side Sense, which I complained about at length in the Xperia 1 review. This is supposed to be Sony's attempt to make a super-tall phone easier to use by providing gestures and app shortcuts at the edge of the screen. However, triggering Side Sense is maddening—my success rate is probably only about 50% because of the small "hitbox" to trigger it. Sony also prompts you to activate Dynamic Vibration in select media apps. The idea is that your phone's vibration motor will sync with the audio and somehow enhance your experience. It does not, and it only serves to remind you of how pathetic the vibration motor in this phone is.

The Xperia 1 II has a Snapdragon 865 like most of the flagship phones we've seen this year. It's still a very fast chip, and it doesn't seem exceptionally power-hungry in this phone. The UI is smooth (or as smooth as it can be at 60Hz), and I never feel like I'm waiting on the phone. I'd rate the battery life as solidly above-average; I regularly get 6-7 hours of screen time before a recharge is needed. Sony's phone tops out at 21W, but it comes with an 18W adapter only.

Perhaps the battery life is better than most Snapdragon 865 phones because of Sony's unusual configuration. While this phone has a 5G-capable chipset, the US version of the Xperia 1 II does not support 5G of any kind. No millimeter wave, no mid-band, no low-band. I don't think 5G is completely necessary in 2020, but most people who buy a $1,200 phone will want to use it for at least a few years, and 5G will be important down the road. I can't fathom paying this kind of money and not getting 5G right now. Excluding 5G is a truly perplexing decision—I've asked Sony for a statement and will update when and if they provide it.

The Xperia 1 II sports a triple-camera setup, and I'm happy to see that all three sensors are useful. There's a 12MP primary, a 12MP 3x telephoto, and a 12MP ultrawide. Sony says it leveraged technology from its Alpha cameras in the Xperia 1 II, but smartphones and mirrorless cameras are very different animals. I will note that the phone focuses quickly and accurately, something of which Sony is very proud. The capture time for photos is often strangely long, bridging almost seamlessly into low light mode. There's a lot of "please hold still while we take this picture."

If you're the type who wants to fiddle with camera settings to plan a shot, put your phone on a tripod, and then process the images in Lightroom, I have no doubt you could get some great photos out of the Xperia 1 II. It even includes powerful pro apps for both photos and video with a UI that will be familiar to users of the company's Alpha cameras. For everyone else (i.e. most people), these cameras don't cut it. Sony's auto mode processing is far behind the likes of Google, Samsung, and even OnePlus. The Xperia 1 II can hold its own outdoors, but it's not particularly impressive. In lower light, many of the shots are a mess of blown-out highlights, crushed blacks, bad white balance—the works. I've been trying to use the rapid burst shot functionality Sony touts, and still, about half of the photos I get are not worth keeping. There's just no consistency, so I find myself constantly going back to look at photos after taking them to see if I need to give it another shot, and that's a bad experience. The telephoto camera also tends to produce hazy shots, and the ultrawide is more distorted at the edges than other phones.

I don't think anyone could look at the comparison shot above and say with a straight face that's acceptable for a $1,200 phone. Google's photo processing is incredible, and I'm not demanding Sony match it, but the Xperia 1 II shouldn't be so far behind when it costs more than three times as much.

No. I don't know why I keep doing this to myself, hoping that Sony will somehow become competitive. Maybe it just shows my age—growing up, Sony was the reliable electronics brand. I feel like I'm supposed to like Sony's products, but the company's smartphones continue to miss the mark. Here, we have a phone that costs well over $1,000, thanks in part to the high cost of the Snapdragon 865. Despite paying for that chip, Sony opted not to utilize its 5G capability in the US. I don't generally think people need to have 5G right now, but if you're paying $1,200 for a phone in 2020, it really ought to have 5G. 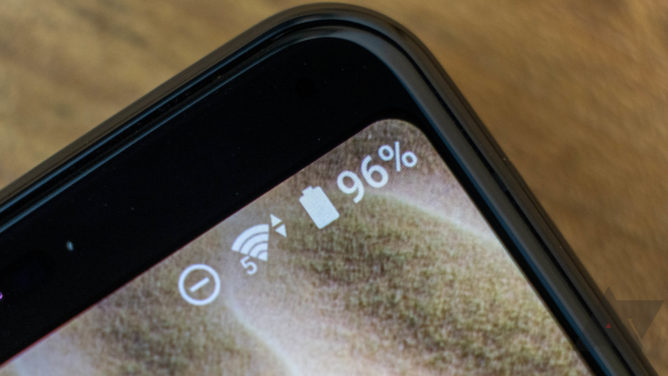 It's not all bad news: the battery life is above average, and the OLED looks great. Although, the display is also 4K, which is unnecessary on a phone. I'd have much preferred a higher refresh rate to extra pixels, but that's what you get when a phone is basically a tech demo.

Year after year, Sony makes phones that cost too much and focus on the wrong things. I wish I could say the Xperia 1 II is different, but it is once again a phone I would not recommend. No matter what you want out of a phone, the Xperia 1 II is not the best option for you.