OnePlus has just released the Android 11 Developer Preview 3 for its 8 series of phones, and with it comes our first look at the new UI landing in OxygenOS 11. Intrepid OnePlus 8 and 8 Pro owners can flash the latest image to check out the changes for themselves, but in short: OnePlus Android 11 skin looks like a Samsung OneUI clone.

Do note, that OnePlus' numbering for Developer Previews doesn't correspond directly to Google's, so this isn't based on the now-ancient version from April. More likely, this is based on either Beta 3 or Beta 2.

"Key" changes and known issues in DP3, as described by OnePlus, are just below:

Fans of OnePlus' prior "light touch" changes to Android probably won't like this new interface, which steps up the graphical tweaks substantially. It's easy to see the inspiration OnePlus drew from Samsung in its overall design, as well, with many applications now focusing interactive content on the bottom of the screen — almost a straight rip of OneUI's "viewing area" and "interaction area" dichotomy for one-handed operation across apps.

As you can see, it's a pretty stark departure from the company's previous design and the stock-like layout previously used. Apps like Settings, the dialer, and Messages look like left-justified versions of OneUI apps, relocating most of their content to the lower 2/3  of the screen or so. OnePlus elected for larger headers. Tabbed interface elements also vary. While in the dialer app they're labeled, other apps like the Gallery app hide them along the top of the display where they're not labeled, hard to hit, and honestly not even clearly recognizable as tabs. It's an inconsistent, poor design.

OnePlus also includes a new OnePlus Sans font, seemingly replacing the old OnePlus Slate, and it looks like it's used by default in a few spots like category headers and some title elements even if you elect for the other default Noto Sans font.

A new live wallpaper — probably the one that's supposed to change according to time of day. We'll see.

There's also a new live wallpaper included that's supposed to change according to the time of day. OnePlus made the same claims about the live wallpapers for the OnePlus 8 and 8 Pro, but the changes (if present) were so subtle, I honestly never noticed them.

Zen Mode has also picked up a new default theme (ostensibly one of three new themes, but I can't find a way to change it) and a new Group mode. I guess it's meant to make not using your phone a social activity — on your phone. The logic for this one escapes me.

There are also even more durations for Zen Mode. You'd think with all the granularity the company keeps updating it with, they'd just give you a slider, but nope. Now you have 1 minute, 20 minute, 20 minute, 40 minute, 60 minute, 90 minute, and 120 minute settings.

Story section in the Explore tab in the Gallery app

There's also a new "story" feature for OnePlus' Gallery app, but I either don't have enough photos to trigger it yet, or it takes longer to start generating them. According to the key update changelog up top, these are weekly, so it might be a while before I know what that looks like.

I can't seem to access whatever changes are present to the OnePlus Launcher's Shelf — my phones all have Google Discover, and disabling it simply disables the swipe gesture entirely.

The newly optimized dark mode is allegedly certified for better accessibility standards by Web Content Accessibility Guidelines, though we're not precisely sure how it's been changed to meet them. In some places, interactive elements have a new gray background to group them together, like you can see in the screenshot from settings above. Icons in several spots are also now circled, and color accenting seems slightly stronger. An optional Dark Mode quick settings toggle is also finally present — as promised, and as included in some recent betas. 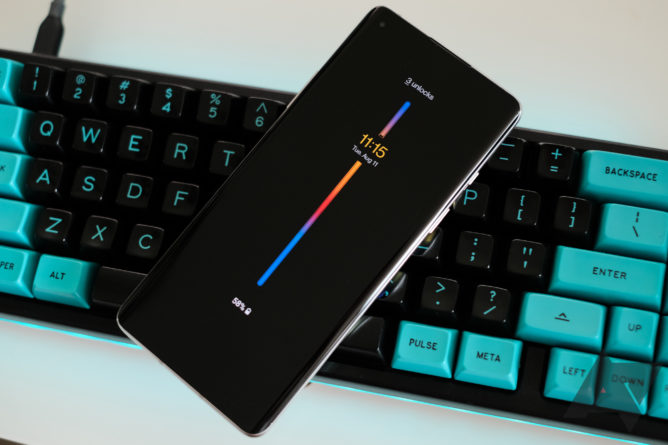 The "Insight" clock as an always-on display.

True to its promises, piles of always-on ambient display settings are included — twelve individual clocks, by my count — with plenty of additional customization settings. They cover a range from minimal to complicated, and you can set when and how they appear. By default, OnePlus is still pushing better battery life with the setting disabled, though your clock choice will still appear if you pick up your phone or tap the display. However, it's easy to enable the always-on mode on in Settings -> Display -> Ambient Display -> Always-on ambient display, and set it to "All day."

We've only been using it for a short time, but so far, it's relatively free of jank and issues — no worse than Google's recent Beta releases. I can't say I'm a fan of OnePlus' interface changes and the growing departure from the stock-like design I strongly prefer, but some folks may prefer it.

If you'd like to dive in and flash the new version for yourself, keep in mind that OnePlus is explicitly advertising a handful of known issues, like system and network stability problems. As it's based on Android 11, some apps not yet updated for the platform's changes may not work correctly. It's also OnePlus 8 and 8 Pro exclusive right now.

Also note that this is the "final" developer preview, according to what OnePlus said earlier this month, and the next version will be a full open beta that more folks can be confident in trying.

If you're still interested, click through at the source link below for the full instructions and downloads.