When it comes to earthquakes, early warnings are key and can potentially save lives. Google recognizes that, and has announced that it's working on earthquake alerts sent right to all Android phones in affected areas, starting in California. For other regions, the company is testing and launching a crowdsource-based approach, relying on the accelerometers found in almost any Android phone in the world.

The Californian warning system has been developed in cooperation with United States Geological Survey (USGS) and California Governor's Office of Emergency Services (Cal OES), relying on the existing 700 seismographs in the state. The technology is based on the ShakeAlert system that's in place as an early warning instrument on the West Coast. When an earthquake is detected, Android phones in the affected regions will display a red, flashing earthquake alert and tell you to drop, cover, and hold in order to protect yourself. 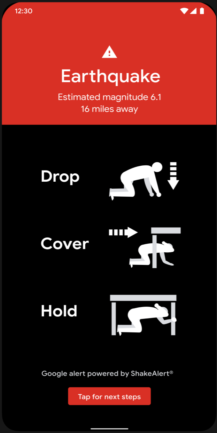 Other regions in the world aren't that well equipped with seismographs, so Google has to try another approach. It's using the collective power of idle Android phones' accelerometers, which are capable of detecting the so called P-wave that precedes the often much more devastating S-wave. Google explains, "If the phone detects something that it thinks may be an earthquake, it sends a signal to our earthquake detection server, along with a coarse location of where the shaking occurred. The server then combines information from many phones to figure out if an earthquake is happening."

In the future, Google wants to use that data to send out alerts just like those it'll push to Californians, though in the beginning, Google will only use the data to map the epicenter and the affected regions after the fact, available to anyone via Google Search.

So, there you have it: Californians will be the first to receive earthquake alerts before the fact, while the rest of the world will still have to wait a bit for Google to refine its crowdsourcing approach for up-to-the-minute warnings. Unfortunately, Google hasn't shared which version of Android will be required for the alerts and detection to work, but the wording suggests that it will be widely available. It's safe to assume that the company is relying on Play Services, which means that you don't need a system update to get in on the feature. The detection will automatically go live for everyone, but it's unclear if there are opt-out options.