The Pixel 3a was our phone of the year in 2019, and for a lot of very good reasons. At $400, it offered a camera experience that many phones costing twice as much couldn't, and an update policy no other Android OEM could match. With the Pixel 4a, then, Google had a lot to live up to, and we weren't sure they could outdo the 3a without compromising on price (and you should read our review of it). It turns out, we were wrong: the 4a makes a few notable changes to the formula Google introduced with the 3a, but their collective impact results in an objectively better smartphone at a lower price.

The Pixel 4a steps up to a Snapdragon 730G chip, which is more powerful than the 670 from the 3a. This chip is around 30% faster than the one in the 3a, and does make a real difference. But the biggest is perhaps the 6GB of RAM in the 4a, which mean apps stay in memory longer.

The increase to 128GB of storage is nice, but it's not just more—it's also faster. The Pixel 3a had eMMC storage, which has a (much) slower maximum speed than the UFS 2.1 storage in the 4a. So, anything that hits the storage should be faster on the Pixel 4a.

There's also the battery, which while only slightly bigger at 3140mAh (versus the 3a's 3000mAh), lasts a tremendously long time on a charge. For more on that, read our battery life impressions here.

The Pixel 3a had big bezels that made it look rather old-fashioned, but the Pixel 4a fixes that. The bezels are much smaller and nearly symmetrical all the way around (the bottom chin is slightly larger). Even though the 4a has a bigger screen, the overall device is noticeably more compact. It's only 144mm tall vs. 151mm for the 3a. The 3a and 4a both have fingerprint sensors on the back, but the 4a's can be hard to find by feel. It's much less distinct than the 3a, which had a hard plastic body. The 4a is soft-touch plastic, and it gets pretty greasy-looking. 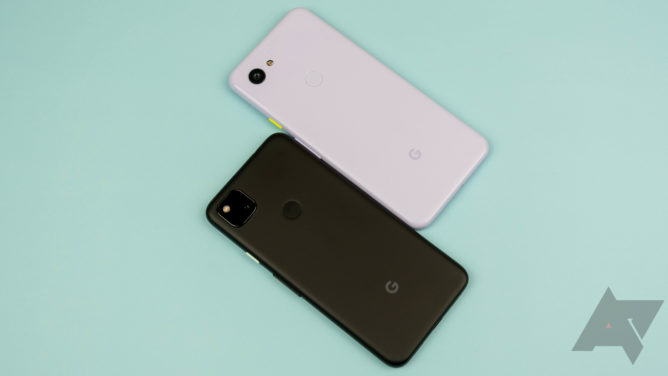 The new phone's OLED panel is in the same ballpark as the 3a with a resolution of 1080 x 2340, a 60Hz refresh rate, and a 19.5:9 aspect ratio—that's a bit taller than the 3a. At 5.81 inches, the 4a's screen is also just a smidge bigger than the 3a's 5.6-inch screen. The 4a has a hole-punch camera in the top left corner as well. Another difference: the Pixel 4a has Gorilla Glass 3 covering the OLED rather than Dragontrail glass like the 3a.

While the Pixel 3a came in black, white, and light purple colors, the 4a only has one color option: black. Yeah, it's pretty boring, but a case or skin can solve that pretty easily.

The Pixel 4a comes with Android 10, so the software is very similar to what you get on a fully updated 3a. However, there are a few new features. Perhaps most exciting for the AP team, Google's new Assistant finally works when you have G Suite accounts logged into your phone. The "new" Assistant debuted on the Pixel 4 last year with quicker processing and better contextual commands. It's a much better experience than Assistant on other phones.

Live Caption launched on the Pixel 4 last year, and it eventually came to the Pixel 3a. The Pixel 4a has that as well, but it debuts a new Live Caption capability. If you have Live Caption enabled, it will transcribe your phone and video calls in addition to media. It even works in third-party apps like Facebook Messenger. Similarly, the Recorder app launched last year with the option to quickly transcribe meetings or lectures. With the 4a, Google has added Assistant integration, so you can start, stop, and search your recordings by voice. The 4a also supports exporting transcriptions to Google Docs.

The Google Safety app even got some attention. There's a new feature called "safety check," allowing you to create a check-in to verify your safety. For example, if you're about to go on a solitary midnight walk or attend a protest, you can create a check-in for a couple of hours in the future. If you don't confirm your check-in, the Safety app can ping your emergency contacts with your location. The app will also push notifications about natural disasters and other public emergencies.

This isn't a feature per se, but we've also noticed that the scrolling on the Pixel 4a is faster and less smooth than it is on the 3a. This appears to be an intentional decision on Google's part.

Keep in mind, none of these features are dependent on hardware. Google will likely update the Pixel 3a with everything that's new in the 4a software.

Physically, the camera module looks different on the 4a. It's a Pixel 4-style square, but there's still just one sensor and a flash. The 12.2MP camera is almost identical in performance compared to the 3a's 12.2MP sensor. The only appreciable difference is a slightly wider f/1.7 aperture vs. 1.8 on the 3a. The 8MP front-facing camera is the same, aside from being in a hole punch instead of in the bezel. 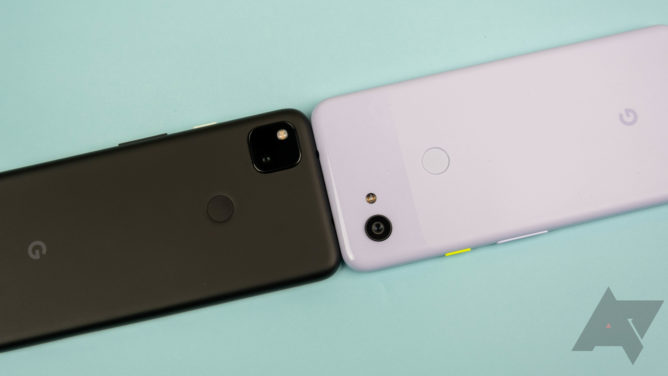 As we all know, the magic of Google's cameras is in the software. We have much more about 4a photography in the review and photo gallery post. Feature-wise, Google has brought the dual-exposure sliders from the Pixel 4 to the 4a. That allows you to compose shots in the viewfinder to compensate for unusual lighting or just to create an artsy snap. Again, this feature might come to the 3a in an update.

Taken together, these changes add up: the $349 Pixel 4a feels like a better, faster, sleeker version of the Pixel 3a, all while costing $50 less. It's the kind of thing that you rarely see happen with phones anymore, where cumulative changes result not just in a better product, but a more affordable one. Part of that is likely down to Google deciding it couldn't support keeping the price at $400 in the current economic environment, but that's really neither here nor there—the precedent has been set. If you shied away from the 3a last year for its dated design, slow storage, or potentially middling battery life, rest assured: none of that is an issue this time around.