Chrome Web Store apps have been flailing for a while now. Google announced in 2016 that these Chrome Apps would be phased out by 2018 — that obviously didn't happen. Earlier in the year, Google committed to a timeline to slowly end support for them, but the company has just released a revised schedule that extends end-of-life dates on all platforms due to "feedback from customers and partners."

The Chrome Web Store stopped accepting new public Chrome Apps in March of this year, but Google has now adjusted the timeline by allowing enterprise admins to continue to submit new private and unlisted apps until Chrome OS support is fully deprecated in June 2022. Chrome Apps on platforms other than Chrome OS (macOS, Windows, and Linux) were slated to die this year, but that's been extended to June 2021. Organizations can choose to extend that even further to June 2022. Support for Chrome Apps on Chrome OS has been extended to June 2022 for everyone. Just to clarify, extensions are not affected by this whatsoever. 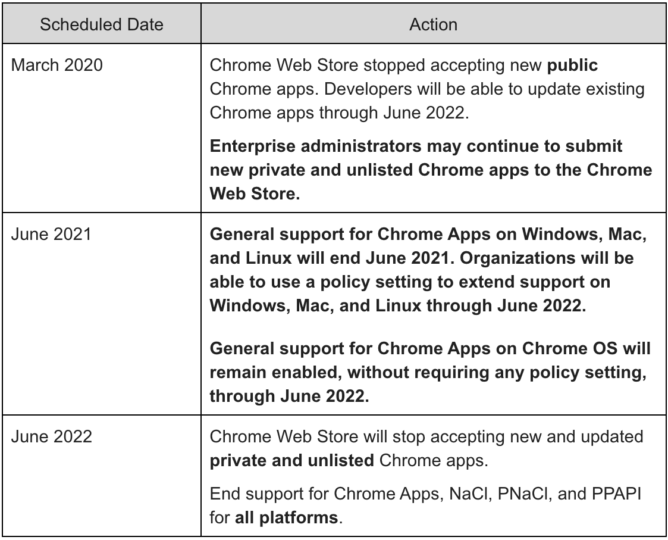 Come June 2022, the Chrome Web Store will stop accepting all Chrome apps, and Chrome Apps support will be ended for all platforms. That is, assuming that the timeline doesn't get pushed back even more (which wouldn't be too surprising).