Samsung's first "Ultra" phone, the Galaxy S20 Ultra, received at best a lukewarm critical reception. Consumers didn't seem to respond, either, as sales figures have not been strong. And while some of that boils down to trying to sell an extremely expensive phone during a global economic and health catastrophe, a lot of it was just down to what you got for the money. Samsung banked big on cameras a key selling point for the S20 Ultra, and they simply weren’t up to scratch. There’s a lot riding on the Galaxy Note20 series to redeem that phone, and the Note20 Ultra in particular. We went hands-on with both of the new Notes, and here are our thoughts.

The Note20 Ultra starts at $1,300, which is $100 less than the S20 Ultra but still an awful lot for a smartphone. In a world where you can get a OnePlus Nord for less than $500 and the excellent Pixel 4a for just $350, the Note20 Ultra faces an uphill battle in proving its worth. Meanwhile, the standard Note20 starts at a seemingly more reasonable $1,000, but it represents a substantial downgrade in multiple areas.

I was invited to spend a little time with the new Note20 lineup at a socially distanced briefing event here in London, UK. 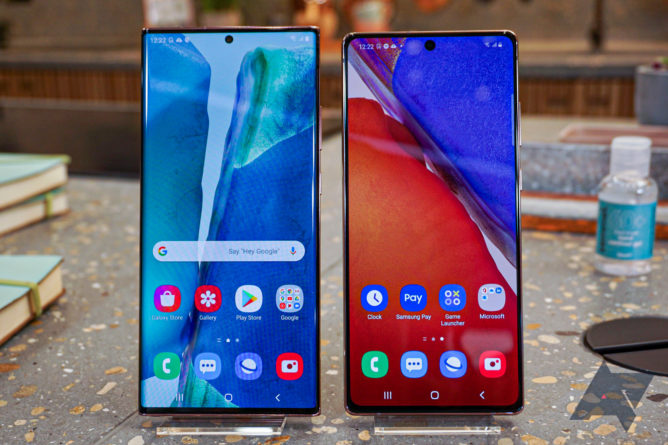 My immediate reaction to the Note20 Ultra is certainly more favorable than when I first got my hands on the S20 Ultra — the latest S Pen-toting flagship just feels like a more refined and accomplished slab of glass and metal. It’s unashamed of the ginormous camera module and instead derives much of its character from it. There’s no silly “100X Space Zoom” branding and compared to the profoundly boring Samsung phone designs we’ve had to endure over the years, the Note20 Ultra has an authoritative vibe to it that I can get on board with. While it wouldn’t be my choice, the lead Mystic Bronze color option is far more interesting than the insipid grey and black S20 Ultras colorways. The white option also really pops, but Mystic Black seems to be a little too glossy and fingerprint-hungry for my liking. Around the front, the Ultra sports a minuscule punch-hole camera cutout whose central placement makes for a pleasing symmetry. Top and bottom bezels are practically non-existent, and while there is still a curved edge to the side of the display, it’s mercifully nowhere near as pronounced as on Samsung phones of old. This is another typically beautiful OLED panel from the South Korean company’s display arm, measuring 6.9 inches diagonally, but it’s disappointing that you can’t run it at 120Hz in full resolution (WQHD+ - 1440p). Whereas the S20 Ultra lived and died by its cameras, the Note20 Ultra’s offering is more modest but hopefully superior. It uses the same 108MP primary sensor but adds laser autofocus to rectify what was the biggest letdown with the S20 Ultra’s camera system. The telephoto is upped to 5x optical and doesn’t boast the same ridiculous "100X Space Zoom" — it’s only 50x this time, which might stand a better chance of producing usable images. The 12MP ultra-wide is likely unchanged, and there’s no TOF depth sensor. Whether or not Samsung has improved its processing remains to be seen, but this is very capable hardware. Video in 8K at 24fps will be possible, but it'll eat up your storage in no time at all. 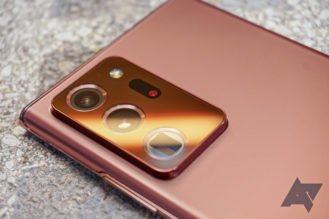 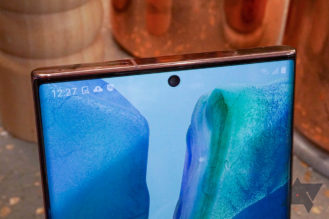 With a Snapdragon 865+ processor and 12GB of RAM, the Note20 Ultra will no doubt be a performance powerhouse, and its 128 or 512GB of storage is expandable via MicroSD. The software on the models I got to play with wasn’t final, so it’s hard to say what goodies One UI 2.5 will bring. The new S Pen looks no different but its latency has been brought down to just 9ms on the Ultra (it was 42ms on the Note10) and it’ll have some new air action tricks up its sleeve. The new 60GHz Ultra Wideband feature will apparently make for better sharing and we may learn about other uses, too. The Note20 Ultra has the potential to be the best phone Samsung has ever made, but we’ll have to wait and see if it can live up to this promise. After the S20 Ultra, confidence isn’t especially high, but it surely can’t be any worse.

In contrast to premium Ultra offering, the regular Note20 has specs and features you might more readily associate with a Lite version. Probably the most eye-catching hardware feature, and one that Samsung isn’t likely to shout from the rooftops, is that the rear of this phone is plastic, not glass. I’m not against this, in principle — plastic phones can look just fine and they won’t shatter when dropped — but Samsung and other OEMs have done their best to convince us that glass is worth paying more money for, so rationalizing a return to plastic backs on a $1,000 smartphone won’t be easy. Even so, the Note20 doesn't feel cheap, and the matte finish will hide fingerprints better than most phones. That Mystic Green color option is also quite something. 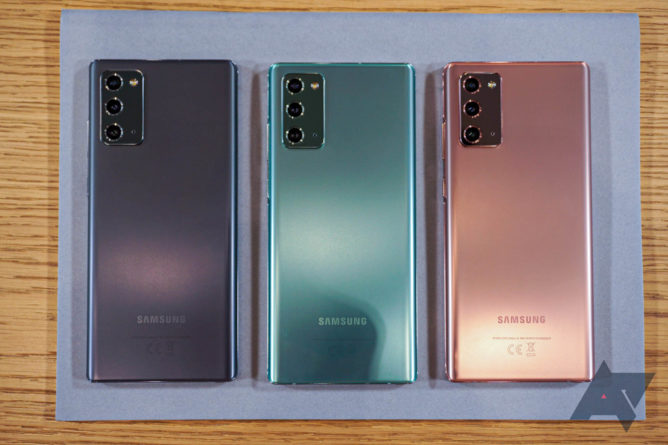 There are many other considerable downgrades. The smaller 6.7-inch OLED screen has a resolution of just1080p and the refresh rate is just 60Hz. There are plenty of phones costing half as much that offer far better display technologies, so I’m not sure what Samsung is playing at here. At least the screen is completely flat. In the camera department, the telephoto can only manage 3x hybrid zoom and up to “30X Space Zoom”. The S Pen latency is still improved over the Note10, but significantly worse than the Note20 Ultra at 26ms. The cheaper model also has less RAM, no microSD slot, and no Ultra Wideband feature. All things considered, $1,000 is a high price for a phone with all of those compromises, and it’s difficult to imagine it holding up against the similarly-priced OnePlus 8 Pro — although time will tell. 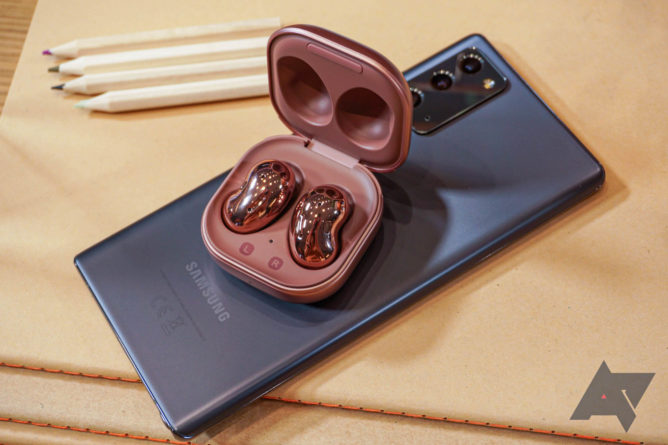 Both the Note20 and Note20 Ultra have abandoned Samsung’s 45W charging technology, but the company claims to get faster speeds with its latest 25W chargers. They are both capable of mmWave 5G, but there will also be a Note20 without it for carriers that don’t want it. Samsung’s partnership with Microsoft is stronger than ever — expect improvements to the Your Phone app and game streaming via Xbox Game Pass Ultimate will come to these phones in September. The latest version of Samsung’s DeX desktop conversion system will also be wireless, which could be nifty if it’s any good. I was also afforded some brief time with some of Samsung’s other new products. The Galaxy Buds Live are even more curious in person since they seem way too big to comfortably stay in your ears. I wasn’t allowed to pop them in, though, so I’ll reserve judgment. The case isn’t quite as pocketable as with previous Samsung Buds, either. The Galaxy Watch3 is a predictable premium wearable that looks pretty but it won’t be capable of doing ECGs in the US, which is disappointing for a product costing at least $400. Finally, Samsung’s new tablets are exactly what you’d expect — iPad Pro copycats with lovely hardware but less appealing software. 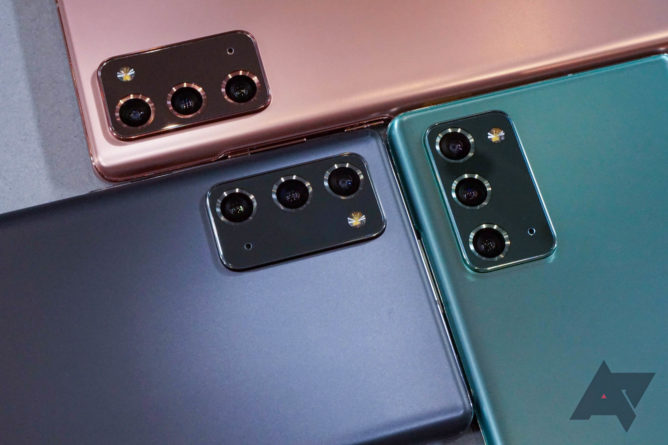