Wireless headphones have been around for years, but they've taken on increased importance now that phone manufacturers are leaving out the 3.5mm jack. Companies like Sony and Bose have been cranking out great options, but most of those products cost $200 or $300. That money can get you a lot of premium features like active noise cancellation and high fidelity sound — but do you need to spend that much? The Tribit QuietPlus 72 headphones cost just $70 and offer some premium features like ANC and multi-device pairing. However, the construction is lower quality, there are no customization options, and the ANC is merely okay — they don't excel in any one area.

Over-the-ear headphones don't usually push the boundaries of design, and a pair of $70 headphones aren't going to change that. They look like most Bluetooth headphones: not exactly ugly, but not something that will turn heads. The margins on these headphones probably aren't large enough for Tribit to invest in bolder color variants, so we get a safe, boring black option. To me, headphones are as much a fashion accessory as an audio accessory. Here in the US, we may spend the rest of our lives quarantining indoors, but I still would've appreciated it if Tribit had given these headphones a bit more personality.

They may not win any beauty pageants, but at least they're comfortable to wear. Plastic is often a sign of cheap smartphone construction, but it makes headphones light enough to wear for hours at a time. I can see these being a great option for long plane rides and people who just like to wear ANC headphones around the house. 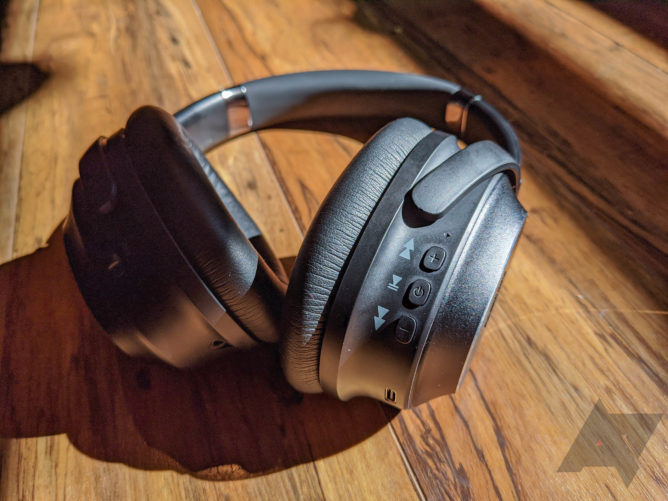 Most of the controls are on the back of the right earcup in a three-button array. The top and bottom buttons raise/lower the volume with a single press and skip forward/backward with a double press. The middle button controls play/pause with one tap, triggers your digital assistant of choice with two taps, and powers the headphones on and off by pressing and holding. They're pretty intuitive controls, which is good since they can't be customized. I got used to them quickly, and within an hour or two I was reaching back there like I'd always had volume buttons embedded in the back of my earlobe. Turning the headphones off and on gives verbal confirmation through the earcups, and it's loud enough to be heard when they aren't actually on your ears, which I like. 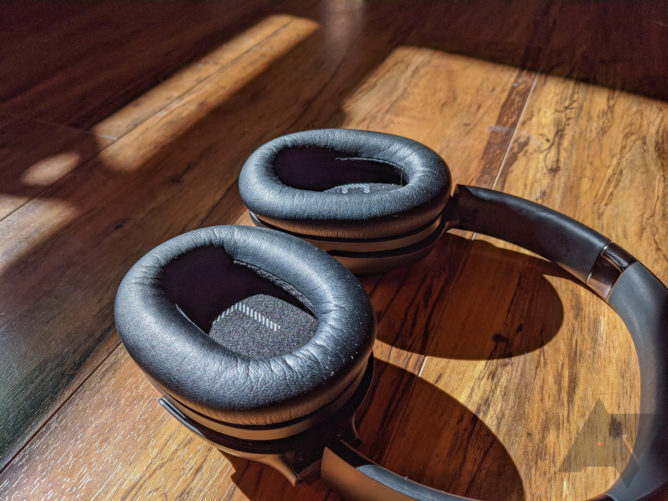 A switch on the back of the left earcup toggles active noise canceling on and off. It's a little hard to get a hold on with just the tip of a fingernail, but once I learned to press with my whole fingertip, switching was simple. There's no passthrough mode here, so it's either ANC on or ANC off.

Inside the box, Tribit includes a USB-A to USB-C charging cable and a 3.5mm audio cable for connecting the headphones directly to devices. There's also the usual assortment of instructional manuals to skim over.

Even the best-designed headphones in the world aren't worth buying if they sound lousy. For $70, the QuietPlus 72 sound pretty solid to my ears. I'm no audiophile, but I was impressed by the overall soundscape when playing my usual mixture of pop, musicals, and soundtracks. There's a fair amount of bass that comes through, and listening to YouTube Music on the highest quality settings never left me disappointed. Kacy Hill released her new album around the same time I was testing these, and the eclectic compositions were a lot of fun to listen to with these.

While the ANC here isn't as consistent or effective as more expensive offerings, I was happy with its performance for the most part. It quieted all of the wind and some of the engine growl while driving around in a noisy truck. While listening to an audiobook in my family's living room, it made the microwave, ceiling fan, and dehumidifier fade away almost entirely. It won't work as well on higher-pitched, less consistent noise, but it did take the edge off voices (and my little sister's ukulele practice). The ANC functionality is separate from the main power toggle, so you can block outside noise without actually listening to anything. Like many ANC headphones, there is some slight hissing audible at lower volumes, but it's never noticeable enough to bother me. Call quality is mostly good, although caller's voices can echo back to them if the volume is too high and/or the seal isn't good enough. 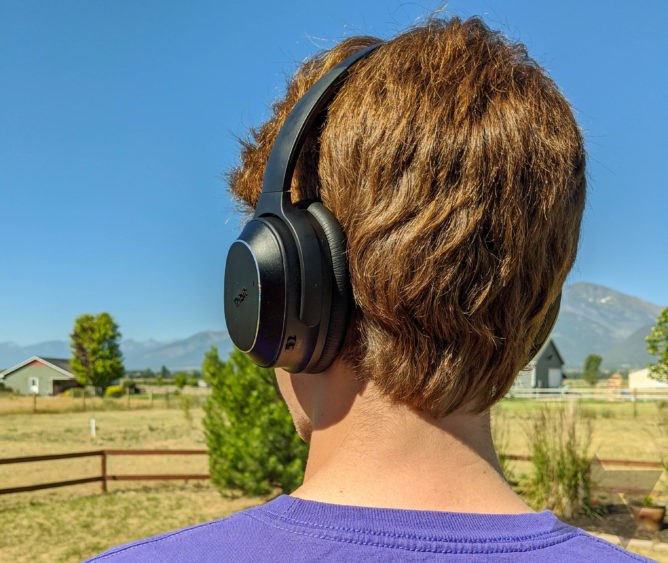 Google introduced a number of improvements to its Fast Pair standard earlier this year, but none of those features are available on the QuietPlus 72, since Tribit didn't see fit to add Fast Pairing capabilities. That said, the pairing process was still quick, and I was able to leave my phone inside the house and walk about fifty feet outside before the audio started cutting out. Tribit says the headphones have multi-device pairing for phone calls, but it was pretty finicky with my Pixel 4 XL and 2015 Macbook Pro. It doesn't remember the connection between multiple devices either, so you have to pair your phone, turn off its Bluetooth, pair the headphones to your laptop, and then toggle the phone's Bluetooth back on to get the dual-device pairing operational.

The included manual only mentions Siri when talking about summoning a voice assistant, but the headphones work fine with Google Assistant. Double tapping the play/pause button to trigger Assistant might not be as effortless as the Pixel Buds level of integration, but it isn't terribly upsetting to me. It’s acceptable as long as you’re not activating Assistant constantly throughout the day

Charging via USB-C took the expected 3 hours to fill the battery, but there's a catch. The ANC is controlled solely by that switch on the left earcup. So even when the headphones are powered "off", the ANC can still draw power. It nearly doubled the charging time when I left it on. This is by design, but it's confusing. With ANC enabled, I get about 12 hours on a full charge. Turning it off bumped the battery up to around 25 hours, but I'm skeptical that anyone could achieve the maximum 30 hours Tribit says to expect.

Unlike many higher-end options from the likes of Sony or Bose, Tribit does not have an app for the QuietPlus 72. That means no firmware updates, no ANC/control customization, and no equalizer settings. That's not a deal-breaker for me, but if you like to get funky with your EQ, these are probably not the right headphones.

Tribit QuietPlus 72
7/10
Maybe. The QuietPlus 72 headphones only cost $69.99, but there's a reason for that. You won't get class-leading noise cancellation, battery life, or sound quality. Even so, I don't think you'll find many other options that offer this much value. For less than a hundred bucks, the QuietPlus 72 deliver on the basics. They have a reliable Bluetooth 5.0 connection, hybrid noise cancellation that works decently, multi-device pairing,  and enough battery to last through the day. On top of all that, they manage to sound pretty good, too, with separation between lows and highs and a fair bit of bass.
I think they're a great option if you need some ANC headphones for occasional use, or if you're obsessed with getting the best value on a low budget. 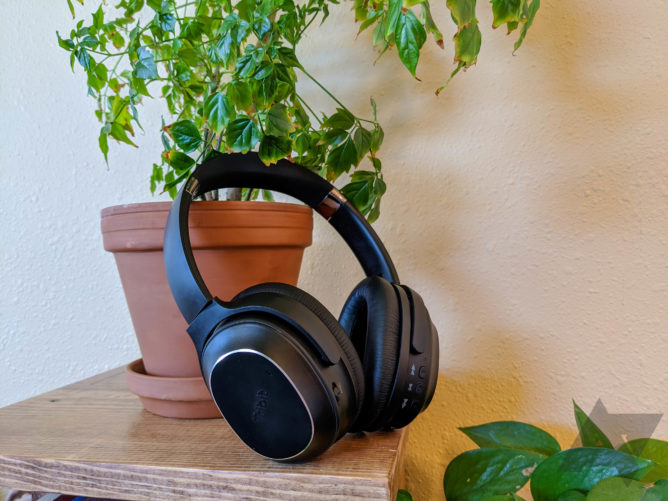