An iOS feature many developers (and probably some users) have been asking for is finally making its way into Android. Google has announced a new in-app review API that lets devs ask users for Play Store reviews. That will allow them to rate and comment in a slide-up panel without leaving the app. This will make the rating prompt that used to take you to the Play Store for reviews much less disruptive.

As a user, you'll see a slide-up panel complete with the usual Play Store iconography, pulling up the familiar five-star rating interface. There's an option to tap "Not now" if you don't want to leave a review. When you select how many stars you wish to give an app, a text field will open, letting you type out a review if you'd like to. You can then decide to submit or cancel. 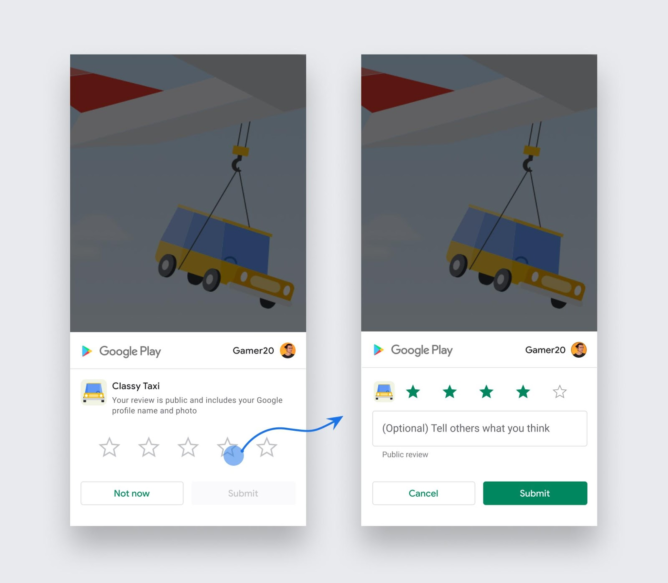 Google encourages developers not to spam users with review requests right when they first start an app, instead asking studios to prompt people only after they've used the application for a while. Developers also shouldn't interrupt users in the middle of a task. After leaving a review or aborting, people should be able to continue whatever they were doing seamlessly.

The in-app review API has been in the works since at least July 2019, when we spotted it in a Play Store APK teardown. In the meantime, a few developers got in on a limited test run, which we captured on screenshots in January 2020.

Developers can now ask for ratings and reviews from within your app with the new in-app review API.

The API is designed to respect user privacy and doesn't give developers feedback on who exactly leaves a review through the interface. There are also caps that limit how often the API can be prompted so apps won't ask for reviews excessively when someone decides not to leave one. Interested developers can read more about the API in the source link below or head over the Github to check out an example app using it.

Let's hope the API is designed mindfully enough to prevent the popup from showing up again and again when someone decides not to review. Apple lets people opt out of review prompts altogether on iOS, but it doesn't look like Google offers a similar function.