Google has just teased its new flagship Pixel 5 (and the Pixel 4a 5G), but the Pixel 4 remains the only high-end phone the company currently sells. After the Pixel 4a launch event, we noticed that the Pixel 4 started disappearing from the Google Store, with its status flip-flopping between available and sold out. The most damning evidence we found is a Google support page that says the Pixel 4 is no longer available in the US. And sure enough, while Google wouldn't tell us what's up, The Verge now says the company has just confirmed that it has discontinued the Pixel 4.

Google says in a statement to the publication,

Google Store has sold through its inventory and completed sales of Pixel 4 [and] 4 XL. For people who are still interested in buying Pixel 4 [and] 4 XL, the product is available from some partners while supplies last. Just like all Pixel devices, Pixel 4 will continue to get software and security updates for at least three years from when the device first became available on the Google Store in the US.

At the time of writing, only the smaller Pixel 4 is still available for purchase on the US Google Store, and the XL is already completely out of stock. With Google's statement in mind, the smaller Pixel will probably soon join its sister model (Update: The Pixel 4 lineup is now completely gone). 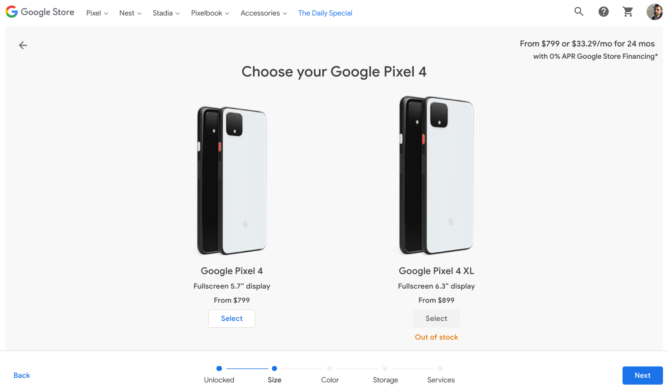 This may mean that the Pixel 4 has the shortest life compared to any other Pixel, if not even to any Nexus device. The Pixel 3 and 3 XL could be purchased from October 2018 all the way to March 2020, while the Pixel 3a went from May 2019 to July 2020, which is still a few months longer than the Pixel 4 (though just like it, it was discontinued before we got its successor). It's possible that Google is experiencing some manufacturing issues due to the coronavirus pandemic, or it wasn't satisfied with the sales performance of the Pixel 4 at all — both scenarios seem plausible.

If you're still interested in the Pixel 4 (though we recommend you wait for the 5 or go for the 4a if you need a replacement right now), you'll still be able to get it from third-party vendors like Amazon and Best Buy as long as inventory lasts. For now, the Pixel 4 line also remains available in the Google Store in Australia, Germany, Ireland, Italy, Japan, Singapore, Spain, Taiwan, and the United Kingdom, according to Google's support page.