Recent OnePlus phones have largely closed the gap with mainstream flagships by adding widely-requested features like wireless charging and an IP rating, but there’s still room for improvement. An always-on display setting is perhaps the most sought-after software feature, and it even topped OnePlus’s crowdsourced suggestions for OxygenOS, following which, the company decided to greenlight it. With the IDEAS campaign coming to an end, OnePlus has shared a timeline for AOD’s projected arrival.

From around 5,000 ideas submitted throughout the campaign period, the company has picked just five, of which only the always-on display feature is already in development. OnePlus says that the initial work will be completed by the next month, and after that, the feature will undergo testing in two beta stages. The manufacturer aims to conduct the closed and open beta testing around August/September if everything goes as planned. That means you’ll have to wait at least until the last quarter of 2020 for the feature to arrive in a stable release.

While brands like Samsung have supported this feature for a very long time, OnePlus has resisted due to apparent reservations with its impact on battery life. An earlier statement from the company said that AOD had cleared initial power consumption tests and would be further optimized before being considered for a beta launch. Additional features are also in the pipeline, including biometric security for hidden pictures, a battery-full chime, app drawer folders, and Zen Mode enhancements, though they haven’t been given any release timelines.

In a cryptic tweet, OnePlus CEO Pete Lau seems to indicate that always-on display will finally arrive on OnePlus phones quite soon. The much-awaited feature will likely start shipping with the upcoming OxygenOS 11, which should correspond with Android 11’s release.

If that’s actually the case, AOD will presumably first see the light of day with a beta release before reaching everyone through stable channels. The feature’s development appears to be on track as today’s teaser falls in line with the original release timeline OnePlus had previously suggested. 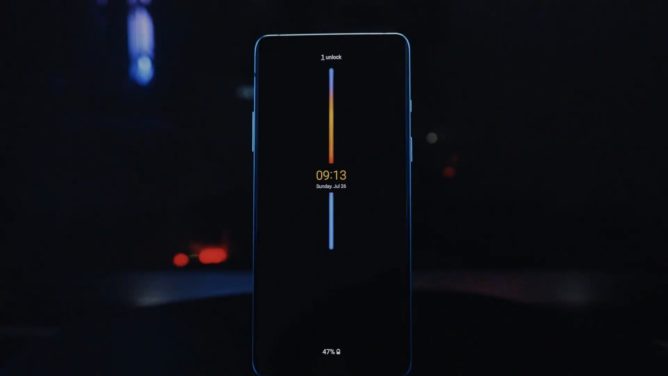 With OxygenOS 11 just around the corner, OnePlus has given us a glimpse of what its always-on display implementation is going to look like. In a marketing video for HydrogenOS 11 (the Chinese version of OxygenOS), the company revealed the AOD interface it has decided to go for (above image) after testing out a bunch of seemingly overstuffed and goofy designs (shown below).

The colored line running down the center seems to have some digital wellbeing features baked in, displaying how much time you've spent on your phone and how often you unlock it. The date and time element slides down as the day passes, while all the notification icons sit in a row at the bottom.

There is a good chance that the international version that we'll get will also adopt a similar AOD design. In fact, a portion in the video actually reads OOS11 — short for OxygenOS 11 — in-between some Chinese text, hinting this is what we'll see on OnePlus phones outside China.