In a world where tablet-sized phones fold up to fit in our pockets, it's fascinating to see companies like Samsung not just continue to stand by the classic tablet form factor, but to continue to innovate in terms of features and performance. Last year brought us the powerhouse Galaxy Tab S6, followed just a few months ago by the more affordable Tab S6 Lite. Following a summer packed full of leaks, Samsung is finally announcing its next generation of Android tablets, the Galaxy Tab S7 and S7+.

Just like with the Tab S6, Samsung is not messing around when it comes to hardware here, and both the S7 and S7+ are powered by new Snapdragon 865+ SoCs. Memory varies by configuration, and you'll get either 6GB of RAM for the 128GB tablet, or 8GB with the 256GB editions. Whichever you choose, you'll also have the option to get online with 5G connectivity (supposedly the first time a tablet's offered the option). If you insist on taking photos with a tablet, you'll find 13MP standard and 5MP wide-angle cameras here, and an 8MP front-facer for conferencing. 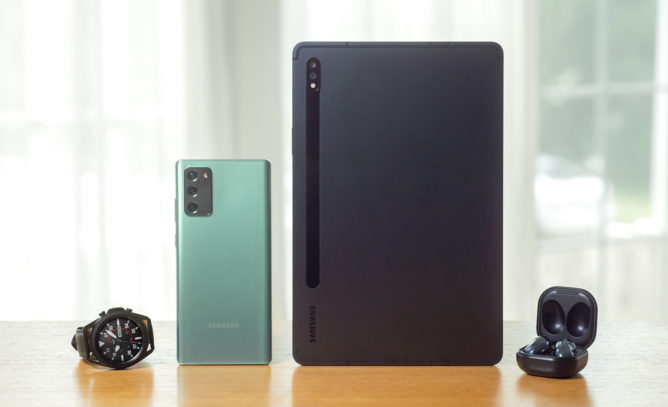 The Galaxy Tab S7 with the rest of today's Unpacked family.

The big difference between these two is their screens: The S7 goes with an 11-inch LCD, while the S7+ sticks with the more expected OLED, and grows to a 12.5-inch panel. At least both those displays support 120Hz output. There's also a small tweak to how you authenticate, since the S7+ has an in-screen fingerprint scanner, while the S7 integrates its scanner into the tablet's power button. Understandably, we're also looking at differing battery capacity, and Samsung gives the S7 8,000mAh to the S7+'s 10,090mAh — both supporting 45W fast charging. 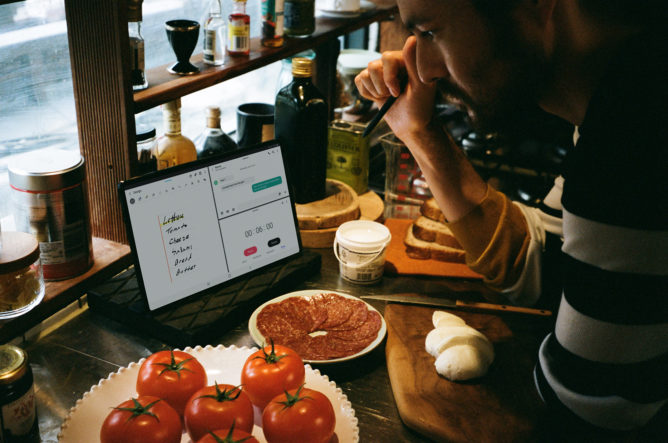 My dude, you should not need a recipe to make a sandwich.

Samsung's magnetically attaching, Bluetooth-equipped S Pen is back this year, and picks up some new gesture-nav tricks. While there's no keyboard shipping with either the S7 or S7+, Samsung is releasing an optional Book Cover Keyboard, redesigned for 2020 with an even larger touchpad.

Sales for both models will come to the US sometime this fall, with prices starting at $650 for the Tab S7, and $850 for the S7+. You can look forward to picking one up in your choice of Mystic Black, Mystic Silver, or Mystic Bronze — just as long as it's something Mystic.