The long-awaited Galaxy Note20 series of phones is now official. Both the new Note20 Ultra and Note20 pack the latest Snapdragon 865+ and the Note-required S Pen, but as much as the two new phones have in common, they're also pretty different. Prices start at an even thousand dollars for the smaller phone and $1,300 for the Ultra, with availability set for August 21st. Pre-orders open August 6th. As anyone that remember's this spring's Galaxy series lineup may remember, and as its name implies, the Note20 Ultra is the higher-end of the two new phones. It packs the latest Qualcomm Snapdragon 865+, 12GB of RAM, 128 or 512 GB of storage, and a 4,500 mAh battery. Samsung's seemingly given up on the old 45W charging that none of its phones was actually able to reach, as well. This time things max at 25W, though Samsung claims it will charge to half-full in just half an hour. We're also told that the big 6.9" QQHD+ 120Hz display is 25% brighter, but unfortunately, it still can't pull that high refresh rate at its native resolution — you'll have to stick to 1080p for 120Hz or enjoy all your pixels with a little less smoothness. 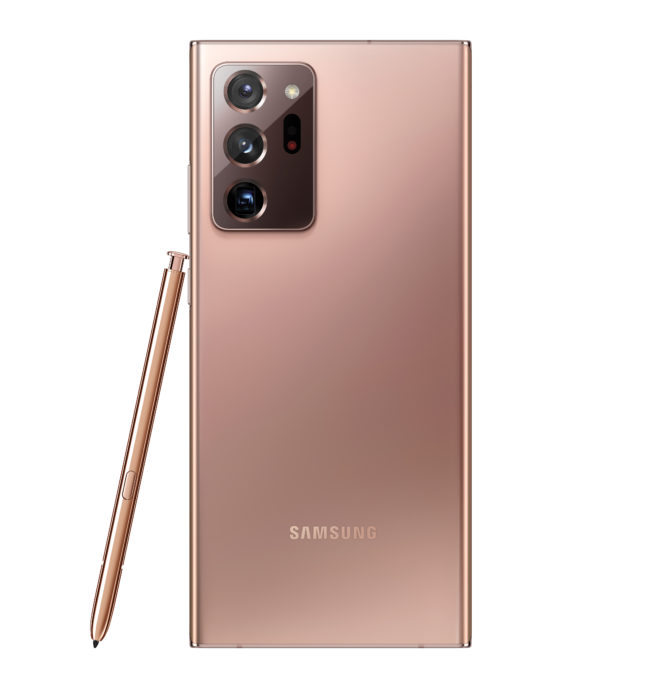 The cameras are a little different than the Galaxy S20 Ultra. While it also has what sounds like the same gargantuan 108MP primary camera sensor, it augments it with a significantly faster laser autofocus, ostensibly fixing one of the S20 Ultra's most significant issues. Like the S20 Ultra, it has a 5x optical zoom periscope-style camera, but the digitally-assisted Space Zoom feature caps out at a more realistic 50X zoom.

A new 60GHz Ultra Wideband feature is also built into the Note20 Ultra. While we're told it may be used for other things in the future, for now it provides a Point to Share feature for sending content between compatible devices, as well as a Digital Key feature — though we don't know what it might work with yet. As a Galaxy Note, you also get Samsung's don't-call-it-a-stylus S Pen. The company has reduced the input latency on the S Pen down to a mere 9ms (compared to 42ms on last year's model), and it picks up a few new Air Action gestures as well.

On the software side, it's packing OneUI 2.5 — so yes, you can finally use gesture navigation with third-party launchers. You can also look forward to some new features in the Samsung Notes app like time-synced voice recordings, PDF annotation, auto straighten, and customizable folder and page structures, as well as real-time save/sync, à la Google Keep. The company is also deepening its Microsoft partnership with sync to Outlook and OneNote, plus other features like drag and drop support for the Your Phone app and ostensibly improved screen mirroring. If you're big into Samsung's Dex, it now works wirelessly via Miracast, and you'll be able to use it to stream games from Xbox Game Pass Ultimate starting September 15th. 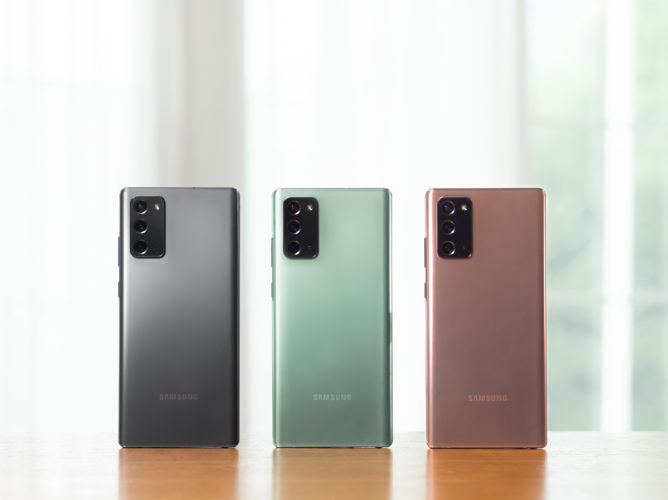 If the Note20 Ultra is the chosen one, the base Note20 is the neglected stepchild. While it shares a Snapdragon 865+ chipset, it steps down almost everything else. The 6.7" display maxes out at a non-flagship 60Hz and 1080p resolution, it has a bit less RAM at 8GB, lacks microSD-expandable storage, has a smaller battery, and its camera configuration is pretty much identical to the Galaxy S20 and S20+ — no huge 108MP primary camera sensor or periscope telephoto here.

As a result, it also maxes at a lower 30X "Space Zoom" digital zoom, though it still supports the other new "pro" camera video features like 8K 24FPS recording. The baby Note20 also misses out on some of the other Note20 Ultra benefits, like super-low-latency S Pen input, though it's still better than last year's Note10 at 26ms, and it should still get the new Air Actions. Based on our hands-on with a UK model, the base Note20 also sports a decidedly less premium plastic back. While we've been explicitly told that the smaller Note20 will support mmWave, some of the details we've seen imply there may be a mmWave-less version (which weighs slightly less).

When you get right down to it, the Note20 is basically a Galaxy S20+ with a lower-resolution, lower-framerate screen, no microSD expandable storage, and an S Pen. While Samsung was regularly offering $200 off the S20 series for a while, it seems to have ended that promotion just in time to highlight the Note20's pricing.

Pre-orders for both models open on August 6th at 12AM eastern, and there are benefits to buying early. If you order the smaller Note20, you'll get a $100 Samsung gift card, and the bigger Note20 Ultra will net you a $150 gift card. Formal availability is set for August 21st.

That's not all Samsung is announcing today as part of its 2nd Unpacked 2020 event. We've also got a pair of new tablets, a smartwatch, and some snazzy ear beans, so keep an eye out for our other coverage.