As with last year's Note10 and Note10+, Samsung has again released two Note-series phones, begging the usual question: Which should you buy? Of course, that always comes down to your wants and budget, but it should still be a surprisingly easy decision to make, given how different the two phones are.

Both phones share a few basic specs, like a Snapdragon 865+, charging speeds, IP68 rating, in-display fingerprint sensor, and (of course) the Note series' ubiquitous S Pen. But where it counts, the phones are surprisingly different, even with their shared name.

Samsung's Galaxy Note20 Ultra, like the S20 Ultra before it, cuts almost no corners. It has a big 6.9" 120Hz 1440p OLED display, 12GB of RAM, massive 108MP primary camera sensor (with new laser-assisted autofocus), a periscope-style telephoto camera with 5x optical zoom and up to 50x "Space Zoom," and the nascent Ultra Wideband tech which will be used for directional filesharing, smart locks, and potentially more in the future. Though base models for both phones share 128GB of storage, the Ultra can be purchased at up to 512GB (and it's microSD expandable), though it starts at "just" $1,299. 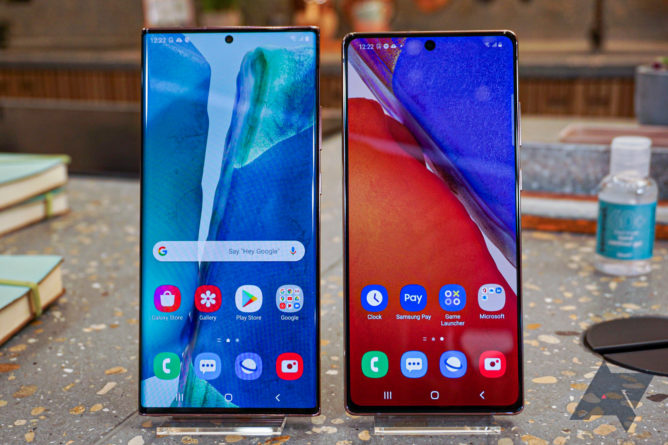 The smaller "baby" Note20 trims things down substantially. It has a smaller, lower-resolution and lower-framerate 6.7" 1080p 60Hz screen. You get 8GB of RAM instead of 12, a smaller and lower-resolution 12MP primary camera (sadly free of lasers), a non-periscope telephoto that maxes out at "hybrid 3x zoom" and up to 30x "Space Zoom," and no Ultra Wideband tech. If 128GB isn't enough for you, too bad: There's no microSD expandability here. It also uses less premium materials, with a plastic back according to our UK hands-on. But it comes in at a slightly reduced $999 starting price.

There is also a question of mmWave support. While we know the Note20 Ultra will work with mmWave 5G, we're told that mmWave on the smaller Note20 may be "optional," so it's possible not all versions will have it. (We'll let you know if we find any that don't.) 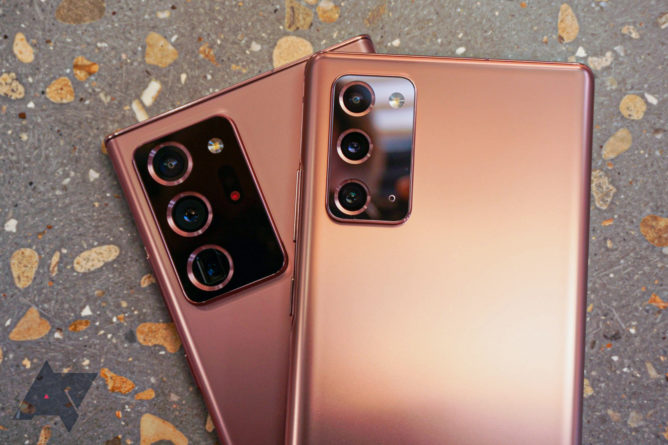 However, there is one more thematically important difference on top of these base specifications to consider. Fans of the Note series swear by their don't-call-it-a-stylus S Pens, and the two phones are not perfectly even on that count. While both offer reduced S Pen input latency compared to last year's Note10 series, the Galaxy Note20 Ultra brings that down to an impressive 9ms, while the base Note20 only hits 26ms — though they otherwise should offer the same S Pen features. Note that the difference here might be hard to feel, not just because these are very small numbers, but because of the refresh rates of the two displays. 9ms is just barely more than one frame of lag at 120Hz on the Note20 Ultra, though 26ms is a little closer to two frames at the smaller Note20's 60Hz.

So which should you get? If you're asking me, go big or go home: Get the Note20 Ultra. The base Note20 cuts down features too much, giving up things like a high framerate display and microSD expandable storage, and it's especially giving up too much given the thousand dollar price. That shouldn't be a compromise when you're paying so much, and Samsung's also recently sold the Galaxy S20+ for the same $999 price, which makes the Note20 even more confusing. Unless you really want the S Pen on a budget, you should probably just save up the extra dough for the Note20 Ultra, buy last year's Note10+, or get an S20+ the next time they're on sale.

Galaxy S20 Ultra vs Note20 Ultra: What did Samsung learn from its last 'Ultra' phone?