The Note20 Ultra is more than just an S20 Ultra with a stylus, Samsung made a few changes that, frankly, make it the better phone — at least on paper. Let's compare: 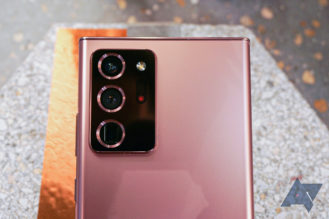 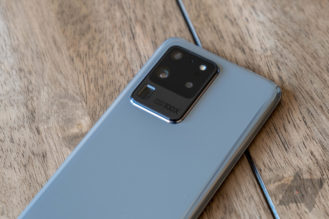 A couple of these details are unknown (like if the Note20 Ultra's telephoto camera is similarly binning down to 12MP or not), but otherwise this paints a pretty clear picture by the numbers, and it shows precisely what Samsung changed.

Like the Galaxy S20 Ultra, the Note20 Ultra has a huge 108MP primary camera. Attentive readers and Samsung fans may remember the autofocus issues the S20 Ultra suffered. Though the phone packed in a massive 9.5 x 7.3mm sensor, apparently that increase in size resulted in problems like slow and "hunting" autofocus. Some claim that subsequent updates were able to reduce the problem, though it never really went away. In effect, The Note20 Ultra admits that was a design defect (or at least a tremendous oversight) with the inclusion of a laser autofocus module that promises much faster focusing. 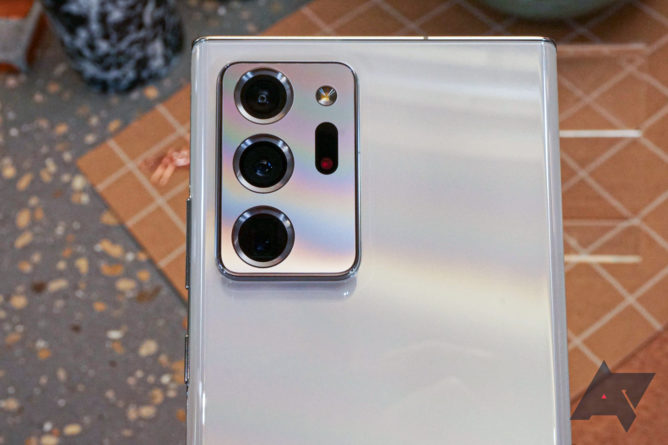 Note the new laser autofocus module — it's in the oblong hole on the right of the camera hump.

The telephoto camera in the Note20 Ultra also has a slightly larger aperture (f/3 compared to f/3.5), and that actually could make a difference as well. Usually, these phones with periscope-style telephoto cameras have such poor light-gathering abilities, they'll only work in bright scenes. Sometimes even a sunset is too dim for them. But a slightly larger aperture means just a little bit more light gets inside, so you should probably be able to use the telephoto camera in ever-so-slightly dimmer circumstances. Samsung tells us native optical "zoom" is also slightly higher, though the old model could ostensibly digitally crop down to 10x with no loss in quality. The change in resolution on the new Note20 Ultra may mean less zoom from cropping before software-assisted sharpening kicks in, though we're not sure if the 12MP number Samsung gave is binned.

Samsung also seems to have learned that its hyperbolic "100x Space Zoom" in the Galaxy S20 Ultra was a step too far. Results at the far end of that range were pretty terrible — impressive, at times, that subjects were even recognizable, but ultimately a muddy, useless mess. But its software-assisted zoom did an acceptable job up to around 30-50x, and Samsung has drawn its new line at precisely 50x.

The last big change that shows Samsung learning something from the Galaxy S20 Ultra is the Note 20 Ultra's diminished charging speed. This time around, things max at a more pedestrian (but more realistic) 25W. Since the Note10+, Samsung's been advertising a hyperbolic 45W USB PD-based charging solution, but in repeated testing, none of its phones ever reached (let alone sustained) such speeds, maxing out closer to 30-35W before falling. 25W is probably a more realistic goal and a much more honest number to advertise. 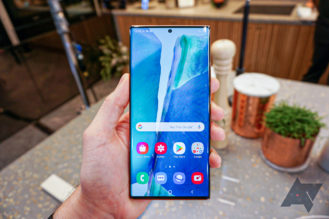 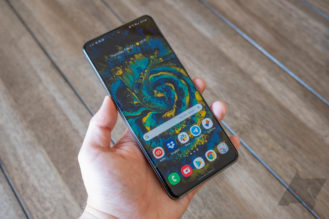 Both phones are big boys.

There are a handful of smaller differences like a drop in the front-facing camera's native resolution and a reduction in maximum RAM for the highest-end models between the two phones. The Note 20 Ultra also has the fancy new 60GHz Ultra Wideband for things like sharing stuff between compatible devices, though its utility will be limited until it's in more stuff. And, of course, there's the Note's S Pen, which probably contributes to the 500mAh smaller battery.

Lastly, of course, is the price: The new Note20 Ultra runs $100 cheaper than the S20 Ultra did. With its various improvements over the older phone, it's a slightly better value — if any phone over $1,000 can be considered "value."

The new bolted-on laser autofocus module and reduction in Space Zoom are pretty clear indicators that Samsung actually is listening and that it's learned a few important things from its first Ultra flagship. The company could just as easily have ignored complaints about autofocus and inflated zoom numbers and shipped a device that was much closer to the S20 Ultra, waiting to improve things with the Galaxy S30 (or S21, whatever it ends up being called). But Samsung paid attention, and we got a better phone for it.