Google's AirDrop-like Nearby Share feature for Android is now officially rolling out. Marking the successful end of a test that started back in June, the long-awaited Android Beam successor is landing today on Google's Pixels and select Samsung phones, and it should be coming to all phones running Android 6.0 and later in the coming weeks. Chromebook support is also planned "in the coming months."

In case you've missed our repeated coverage of the subject, Nearby Share is basically Android's version of AirDrop, letting you share content between compatible Android devices (and, eventually, Chromebooks). And it isn't just for files and photos, you can also share other content like links, Tweets, and pretty much anything Android will let you share via the built-in share sheet. The feature started rolling out a bit more widely at the beginning of July, though it had a bit of a hiccup at the end of the month.

The feature is very easy to use once you have it, though there are a few things you might want to specifically pay attention to during the setup process — like your visibility settings, which control how folks can see and share stuff with you. No matter what, you won't have to deal with the AirDrop issue of randomly receiving obscene content in a public place, though, as the most permissive setting still restricts all-the-time visibility to your contacts. Unless you have the Nearby Share dialog open and waiting to receive a file because you know it's coming, you won't get stuff from randy randos. 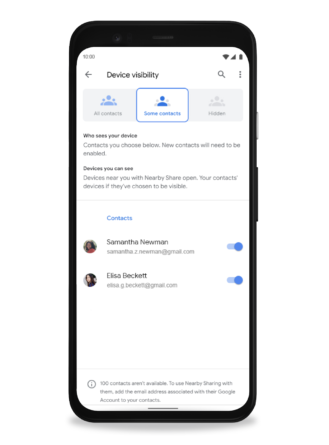 Nearby Share works via a handful of different protocols, sharing stuff via Bluetooth (including LE), WebRTC, or peer-to-peer Wi-Fi, depending on what's best for the situation. We tested sustained rates somewhere around 21Mbps when sharing an especially large video file, but that will vary.

Although we were first told that the announcement was exclusive to Google's Pixels and select Samsung phones, Google has since clarified that that is only regarding immediate availability, and that all phones running Android 6.0 and later will get it eventually.

A Google spokesperson has explained that the Pixel and Samsung exclusivity was a miscommunication. Those devices may get the feature first but it is rolling out to all devices running Android 6.0 and later in the coming weeks. Our coverage has been updated to reflect these changes.