A whole lot is going on right now, and not just when it comes to phones. Life is much more complicated in 2020, and it can be hard sometimes to narrow your focus on the hot new gadgets, even when it's your job. Phone announcements are always exciting — and, for me, a little bit stressful — but yesterday's almost low-key launch of the Pixel 4a was unpretentious, a little bit familiar, and down-right refreshing.

In case you missed it (which is entirely possible), Google formalized the much-leaked Pixel 4a with a blog post. There was no long, rambling, pre-recorded video streamed as if it were live. We didn't get an awkward AR event tied to a reaction video.  The Pixel 4a wasn't first revealed as part of a stilted, live keynote streamed in stutter-step from the best livingroom corner of a half-dozen product managers and executives. We got a ~600-word post to the Google blog (800 with footnotes), confirming the most important details of the phone, dates for launch, and links to pre-order it.

That was it, and that was pretty great.

It's hardly a first, just earlier this year Apple did the same for the 2020 iPhone SE, but it's a trend I hope more companies consider going forward, because the traditional phone launch rigmarole feels like a waste of time now.

Getting personal for a second, I've got a lot on my mind these days. Between politics, protests, the current economy, the pandemic and fear of sickness or death (for my family or me), and my own other personal baggage, 2020 is keeping me very preoccupied. Hell, I bought a cottage in the woods just to get literally as physically far away from some of these problems as I could. And while I'd like it if I could drum up excitement for every single phone launch as if it were the biggest thing in my life right now, like I used to, I just can't. 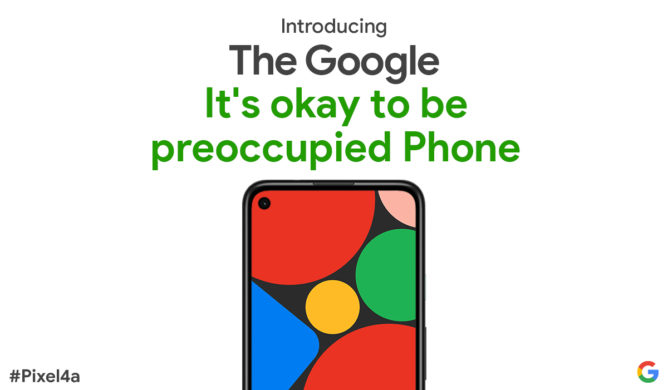 I'm drained and resigned wasting time, effort, and attention on the world's bullshit, and between Google's Android 11 delay and this low-key Pixel 4a announcement, I feel like Google is one of the few companies that honestly gets it. The "Big Smartphone Reveal" as a concept is just about dead, though some companies continue to insist upon the spectacle. And normally, I think that's fine. Big events can still be fun. I'm one of the only folks at Android Police that still gets a kick out of tech company April Fools gags. But right now, at least for me, the long and tedious announcements aren't a refreshing distraction from the mundane, they're an unwanted intrusion in a world that's growing far more serious with every passing day, convulsions to increase declining consumerism in a year of horror that's twisted in on itself like some sort of agonizing fractal.

I'm not saying, "I don't care about phones anymore," I'm just saying that it's nice when companies like Google recognize that our attentions are divided, and subsequently worth much more. An hour-and-a-half-long keynote isn't an appropriate use of my time right now, but a quick and to-the-point blog post is a welcome change that recognizes the value of our collective attention.

We all know this is going to be a busy week, and I think it will be especially interesting to compare Google's relative low-key Pixel 4a announcement with Unpacked tomorrow. Samsung has been known to make a spectacle, but this is the first big phone announcement from the company since we entered full-on social distancing mode. Of course, Samsung has a whole lot more products to announce, and the anticipated Note20 series is a genuine flagship compared to the mid-range 4a. In a lot of ways, it can't be an apples-to-apples comparison.

It will also be curious to see how Apple follows-up on the low-key SE announcement when it comes to the iPhone 12 series later this year, and whether it does a big pre-recorded keynote like it did for iOS 14 at WWDC, or if it (perhaps wisely) resorts to something a bit less time-consuming — for all of us.

Whatever happens, between Google, Apple, and Samsung, I expect we'll see the full range of socially distant phone announcement possibilities in the coming days and months. In the meantime, the Pixel 4a is a refreshing break — not just as a phone (though I'm told that's true as well), but even when it comes to understanding a new phone's place and priority in the world right now.