YouTube Music still doesn't have feature parity with Google Play Music, but the list of remaining discrepancies has been dwindling. Two more items can be checked off in the last few days as the Recent Activities list appears to roll out to everybody and you can now control whether devices like wired headsets and bluetooth stereos can trigger playback.

Recent Activity began appearing in YouTube Music a few weeks ago, but it has been a part of Play Music since around the time of the Material redesign. However, the implementation in YouTube Music is a bit different. 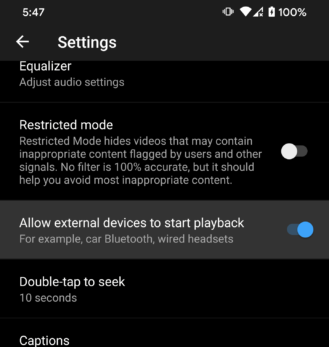 The external devices setting was introduced to Play Music back in 2017 as a workaround for devices that automatically start playback as soon as they connect, like many car stereos and wired headsets. The toggle is situated in the Settings screen and will be enabled by default.

While these two changes probably won't win over users that still prefer Play Music, at least they help to close the gap just a little bit. There's still no precise date for the closure of Play Music, we've only heard it will happen later this year. That still leaves several months for additional features and adjustments.

ADT will sell Nest hardware, give customers Nest Aware as part of half-billion dollar deal with ...

Gboard gets a ton of new suggestions: Stickers, smart replies, and GIF search