Another month, another round of free Stadia Pro games. This time, you can get your hands on a total of four titles if you subscribe to Google's $10 Pro tier, and if you're a Chromebook owner, you can even get three months of the service for free. The games in question are Strange Brigade, Kona, Metro 2033 Redux, and Just Shapes & Beats.

The former two are brand-new additions to Google's streaming service. Strange Brigade has you explore Egyptian labyrinths filled with undead guardians and monsters while you're entering the role of a detective in Kona, up for "a chilling adventure set in a snowbound Canadian village." Metro 2033 Redux is the Metro 2033 remake. As you probably know, the games have you trapped in the Moscow subway after an apocalyptic event, shooting your way through monsters from a first-person perspective. Just Shapes & Beats is very much different. The 2018 "chaotic co-op musical bullet-hell" makes you dodge beats and create songs along the way, working together with friends. 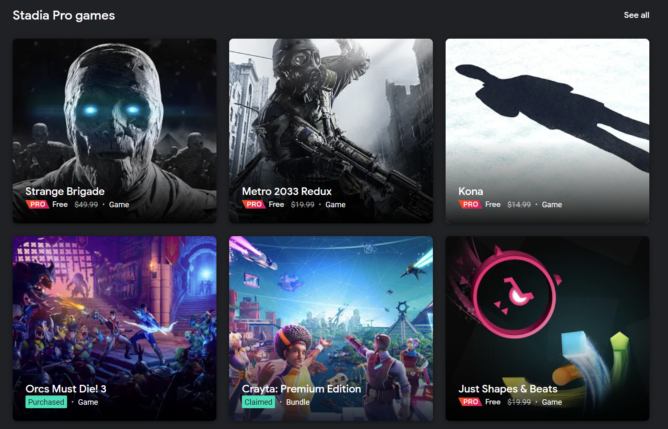 On the flipside, Zombie Army 4: Dead War is now no longer claimable — if you got it last month or earlier, you'll be able to keep playing it for free as long as you subscribe, though. There are also still tons of other redeemable free games, so if you're thinking about picking up Stadia Pro, now's a good time as ever.

To claim the games, you (obviously) need to be subscribed to Stadia Pro. If or once you are, head to the store on your phone or desktop and select which ones you want to add to your collection.

Microsoft gets Trump blessing on TikTok deal, but it must be closed within 45 days

ADT will sell Nest hardware, give customers Nest Aware as part of half-billion dollar deal with ...