It's easy to forget YouTube's early days, before the professional productions and multi-million dollar brands, but things used to be very different. There weren't any high tech algorithms or automated features. Google hadn't yet implemented the impressive speech recognition algorithms that now power many of its products, which meant you also wouldn't have captions or translations unless the video creator added them manually. However, YouTube introduced a Community Contributions system to allow viewers to do some of this work for the creators. After many years of diminishing usage and a rising tide of complaints about abuse and spam, YouTube has decided to shut off Community Contributions.

If you've ever gone poking around YouTube and found the overflow menu with an "Add translations" option, you almost accidentally stumbled into the Community Contributions interface — let's be honest, you didn't (purposefully) open it.

For those that did contribute custom captions and translations, the interface below will look familiar. There were simple tools for selecting timecodes and adding text. Once the work was done, it could be submitted to the channel owner for review, and they could choose to accept or reject it. And in some cases, if enough community members reviewed the submissions, they could potentially be published automatically. 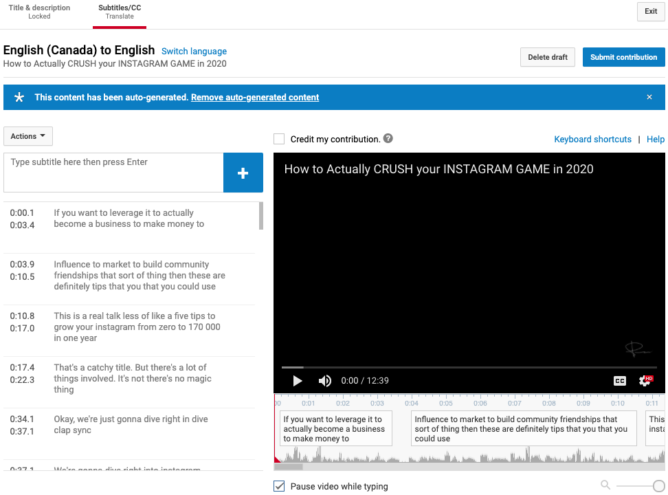 Community Contributions may have originally been enabled for channels automatically, but it has been opt-in for a long time.

While the system garnered some praise in the past, YouTube says that only 0.001% of channels actually published any submitted captions in the last month, and of that, it only covered 0.2% of their watch time. Meanwhile, there have been regular complaints about low quality and spammy submissions through the Community Contributions system, turning it into more of a hassle than it's worth.

YouTube plans to shut down the Community Contributions system after September 28, 2020. Channel owners have until then to accept pending submissions. Nothing will happen to submissions that have already been accepted, and the existing tools for captions will remain as they are today — these include automatically generated captions and translations provided by Google, and of course the manual option for channel owners.

Channels that do regularly use Community Contributions (accepted on 3+ videos in the last 60 days) will receive a 6-month subscription to Amara.org for free, and YouTube has worked out special offers with some other translation services.

It appears this is one of those features that has largely outlived its usefulness, even if a small number of channels still published submissions. Perhaps I've been spoiled as an English speaker, but it seems like YouTube's automatically generated captions are usually good enough.

Chrome 84 hangs and crashes for some, especially when they close incognito tabs