Computers that lack native software for common tasks can be a tough sell sometimes, which is why Google throws in a few perks when you buy a Chromebook. Google recently started including a free year of 100GB Dropbox storage with Chromebooks (on top of the 100GB Google Drive offer that has been around for years), but now there's another promotion — three months of Stadia Pro.

The special perks page for Chromebooks now includes an offer for three free months of Stadia Pro, after which you'll be charged $9.99/mo, so be sure to set a reminder to cancel if you end up not liking it. The deal is only valid if you've purchased a Chromebook released after June 2017, and you also have to live in an area where Stadia is available. 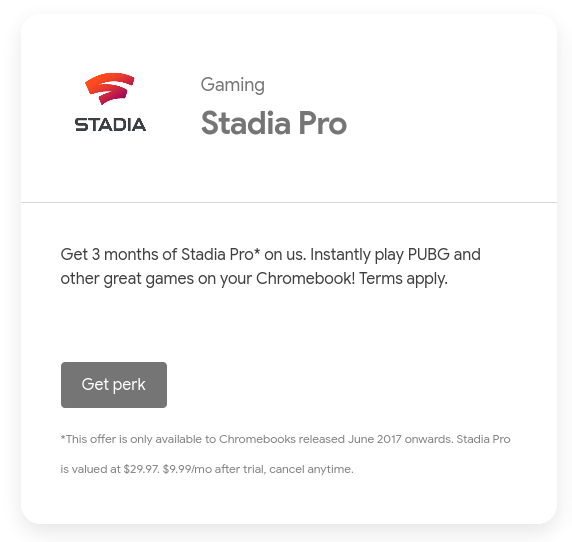 This isn't the first time Google has given Stadia deals to Chromebook owners. Earlier this year, Stadia Premiere Edition (which includes a Chromecast Ultra and controller) was available for just $79 for anyone who previously purchased a Pixelbook, Pixelbook Go, or Pixel Slate. By comparison, the new offer is available to far more Chromebook owners, and doesn't require spending money in the first place.

The long-awaited Android Auto update for BMWs is now available