Google is letting every user back up their phone via Google One, its unified cloud storage scheme for services including Drive, Gmail, and Photos, for free. There will also be an iOS app for the first time while it and the Android one will soon include a storage manager for account holders to clear out old files on said services. These features are the bravest attempt yet to make Google's free users more aware of what One offers and convince them to subscribe.

Subscribers to Google One — tiers start at $2 per month for 100GB — can perform complimentary backups for the data on their Android phones from the Android Messages app. Now, free Google users are getting this feature. 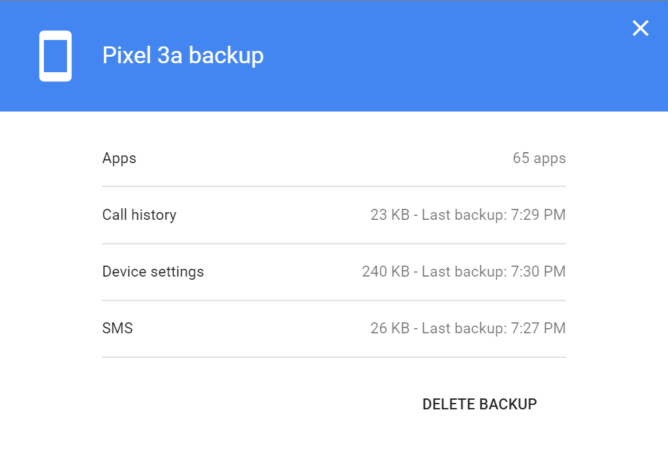 As they are right now, backups are very small: we're talking kilobytes for items such as device settings, call history, SMS, MMS, and a list of what apps were on the device. Importing a backup onto a device will inject the relevant data into the right spots and allow the phone to download the recalled apps. Backups need to be refreshed at least once every 57 days.

The new storage manager, accessible by app or one.google.com, will be shown as a standalone tab. All Google users will see categorized bundles based on media type or size and other parameters. Tapping on a bundle pops up a list view where users can select files to delete as they like. Previously, the Google One site redirected users to each appropriate service to deal with storage on an à la carte basis.

There's no doubt these new features are meant to entice non-paying users to get an app and be exposed to purchase opportunities. Every Google account receives 15GB of cloud storage to store documents in Drive, emails and attachments in Gmail, and media in Photos — even with a few promotional pickups for extra storage, that's not much headroom to deal with. But whether the bait will trigger those riding near their storage cap to bite is going to be another story.

All of the changes are rolling out today with the iOS app coming soon.

How to kick political ads out of your Facebook feed