While many Android manufacturers have created their own fast charge methods over the years, Qualcomm's Quick Charge (QC) standard remains the most ubiquitous on the market. Three years after its last update to version 4+ with up to 100W, Qualcomm has introduced Quick Charge 5 today. It promises more than 100W (without saying how much exactly), much higher charging speeds, and cooler phones.

Qualcomm promises that it can "charge a 4500mAh battery device from 0 to 50% in about five minutes" and go from 0 to 100 in only 15 minutes. That would make QC 5 faster than OnePlus and OPPO's proprietary Warp Charge/VOOC, which charges the OnePlus 8's 4510mAh battery to 50% in 20 minutes.

While the OnePlus will probably remain colder than any phone using Quick Charge, Qualcomm promises that the new standard is 10°C cooler than QC 4+ (though that stat is based on charging 2750mAh batteries). Since phone's power supplies are extremely sensitive to high temperatures, this could help eke out a few more months of usage out of handsets that come with the new standard. 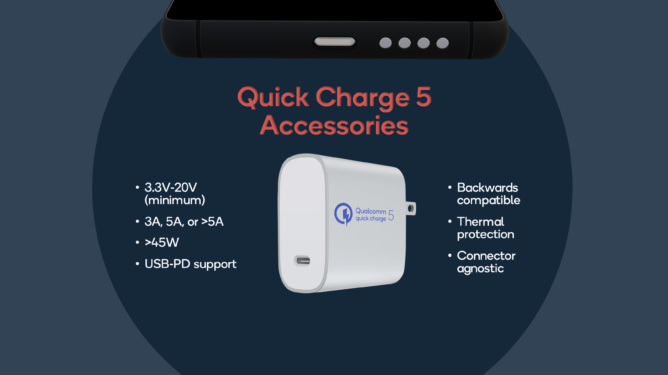 To reach these charging speeds, QC 5 will allow OEMs to put two batteries into their phones that can charge in tandem — a 4500mAh battery would consist of two individual 2250mAh cells then, managed by a Qualcomm battery chip. This setup can reach more than 20V input voltage and wattages beyond 100W. That can easily get complicated, expensive, and take up more space than a regular battery, but that seems to be the way forward. It's what Oppo does with its high-speed charging technology, too. 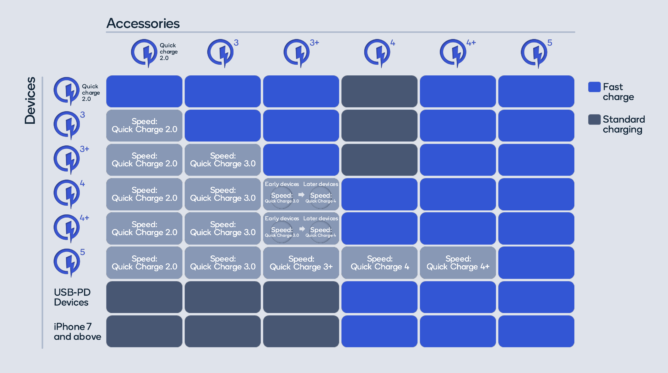 Like any Quick Charge standard before it, Quick Charge 5 is backward compatible with previous generations — a QC 2.0 or any USB PD-compatible device can be charged safely with the latest QC 5 charger, for example. While no phones have been announced alongside the QC 5 introduction, Qualcomm teases that we'll see it on some phones in Q3 2020, since the technology is compatible with the Snapdragon 865 and 865+. As for the ultra-fast dual-cell setup, it remains to be seen how many handsets will end up with it.

EVE Echoes is finally coming to Android on August 13