Google Chrome has supported native lazy-loading images since Chrome 76, which first rolled out a year ago. When websites utilize the feature, they can help you save some precious data by only loading images when they're about to come into view. Google has decided to make that feature even more efficient, reducing the threshold that determines when to start loading images that you are about to scroll to. That should help save you even more data.

As Google Engineering Manager Addy Osmani writes on his blog, the distance-from-viewpoint threshold will be reduced from 3000px to 1250px on fast connections and from 4000px to 2500px on slower ones, like 3G. This basically means that images that are further off from the part of the website you're currently viewing will be loaded a little later. As the demo below shows, this can sometimes slash the data needed for initial site loads in half. These changes have been backported all the way to Chrome 79, so it's likely that your browser is already taking advantage of the improved threshold. 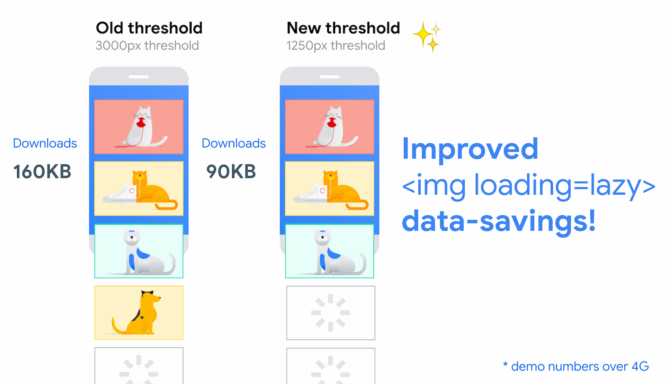 Lazy loading is also available as JavaScript libraries (which have been around much longer than the native browser feature), which are still more efficient than Chrome's solution. Addy Osmani compared the new implementation to the popular LazySizes, which saves even more data on initial page loads. The native solution is much easier to implement for web developers, though, so it has the potential to be more ubiquitous.

Another change to Chrome's lazy loading has also made it into recent releases of the browser. iframe embeds like YouTube videos or Spotify widgets now benefit from lazy loading, saving you a couple of MB when they're far out of sight. This is great for articles full of embeds and should speed up their initial load times, like those of our own weekly best new games and apps roundups.

Despite delays, there will be new emoji in 2021