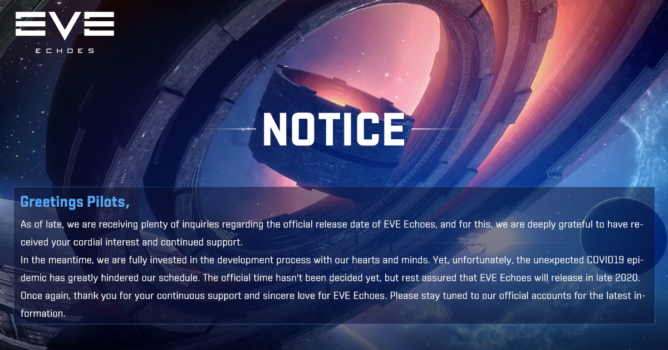 Above you'll find the image posted to the Eve Echoes Twitter account this morning, and as you can see, development has been delayed. Of course, it's nice to know that that the game will arrive sometime before the year is out, despite this delay, though I would imagine eager fans will be slightly disappointed. So if you're interested in new details as they come to light, you can always follow the official Eve Echoes social media accounts, as the above image suggests, or you could simply follow our coverage since I highly doubt this will be the last time we write about the upcoming launch of Eve Echoes.

Of course, if you'd like to pre-register so that you'll receive a release announcement on the day Eve Echoes arrives, you can always do so through the Play Store widget linked at the bottom of the page. This way you won't have to keep tabs on the game to ensure that you'll know when it's out.

EVE Echoes is now slated for an August 2020 release

This past February, CCP Games announced that Eve Echoes would be delayed because of the COVID-19 epidemic, but at the time, a new release window wasn't offered. Well, over the weekend, an official EVE Echoes live stream went out on YouTube (which you can view above), and it was revealed that EVE Echoes will be officially released on the Play Store this August, though a firm date is still up in the air.

On top of the new release date announcement, CCP Games has published a gameplay trailer for EVE Echoes, though it appears to have been recorded on an iOS device. For the most part, I can't say this gameplay trailer offers any new insights on the game, but if you'd like to check it out for yourself, I've placed it below for your viewing pleasure.

Of course, EVE Echoes is still available on the Play Store as a pre-registration listing, just like it was in February. So if you'd like to receive a release announcement the day the game arrives in August, feel free to pre-reg through the Play Store widget at the bottom of the page.

EVE Echoes to Launch in August 2020 on iOS and Android

GUANGZHOU, China - Monday, 18 May, 2020: Global games developer and operator NetEase Games and acclaimed developer CCP Games are delighted to announce that EVE Echoes, the ambitious mobile sci-fi MMORPG, will launch on iOS and Android this August.

EVE Echoes is a next-gen sandbox MMO game for mobile devices based on the award-winning sci-fi spacefaring MMORPG EVE Online. Featuring a vast persistent universe of over 8,000+ solar systems, players are free to choose their own path from countless options, experiencing space exploration, immense PvP and PvE battles, mining, trading, industry, and a sophisticated player economy in the multiplayer sandbox of New Eden.

Check out the newly released cinematic trailer and gameplay trailers below:
New Gameplay Trailer: https://youtu.be/OKXoMF3m6g8
New Cinematic Trailer: https://youtu.be/8zGgPQc9Zls
EVE Echoes has been a collaborative effort between CCP Games and NetEase Games over the past three years with both companies incorporating feedback from the community at every step, in order to produce an unrivaled multiplayer sci-fi experience on mobile devices that does justice to the EVE name.

During an in-depth livestream to the community, the development team revealed EVE Echoes’ August launch date as well as the following new information:

New Faction - The Yan-Jung
The Yan-Jung, an ancient civilization in EVE history, become a brand-new faction in EVE Echoes. The Yan-Jung have been created to enhance the diversity and inclusivity of the EVE universe. They value balance, appreciate the harmony of a collective, respect history, and strive for the ultimate pursuit of "becoming one with heaven." Inspired by ancient oriental architecture, Yan-Jung ships are made with bronze-like metal, using smooth surfaces and symmetrical designs to highlight their oriental qualities.

Corporations
Corporations, a pivotal feature of EVE Online, have been formally introduced into EVE Echoes following the Open Beta Test. Functioning much like the Corporations system in EVE Online on PC, players will be able to band together to mine and explore the universe, with dedicated hangers and wallets accessible by the Corporation’s members as well as a new emphasis on simplification and optimization of utility.

Easy to Grasp Step-by-Step Tutorials
EVE Echoes sees optimizing the gameplay experience as one of its key priorities. In order to make entry easier for beginners, the development team has taken into account valuable player feedback collated during last year’s Open Beta. EVE Echoes has now completed the new players' tutorials, which offers a captivating introduction for novice pilots coming to New Eden.

EVE’s amazing community has already made a significant contribution in shaping EVE Echoes, thanks to their detailed and frequent feedback. This collaboration will continue with EVE Echoes’ launch in August and beyond. NetEase Games and CCP Games are committed to continually addressing fan suggestions and feedback as new functionality and features are added to the game long into the future.

Please visit the Apple App Store and Google Play store and search for EVE Echoes to register to be notified the moment this exciting mobile MMORPG launches this August.

We're excited to announce that EVE Echoes will officially launch on August 13. Get your ships ready. A journey without limits is about to begin. #EVEEchoes

This past February, we learned that CCP Games delayed the release of EVE Echoes because of the COVID-19 epidemic, though in May, it was announced that the game would arrive in August.

Well, August is almost here, and thankfully CCP Games has announced that the mobile interpretation of the world-renowned sandbox MMO will officially land on August 13th. If you'd like to pre-register to unlock a few in-game rewards, you can do so on the official EVE Echoes website, and the more people that register, the better the chances of unlocking the latest pre-reg reward tier, which will grant users a few Insurance Vouchers and Skin Packs. While the Play Store listing doesn't currently offer any way to pre-reg, if you'd like to view the listing to check out its description, you can click on the Play Store widget below.

Despite delays, there will be new emoji in 2021