Back in April, we were reporting the coronavirus pandemic would delay Unicode 14.0's release by six months, implying no new emoji would be released in 2021. Thankfully, a minor update called Emoji 13.1 is said to be in the making, which should bring some new additions next year.

In a virtual meeting held in April 2020, members of the Unicode consortium voted on creating an interim emoji release that doesn't require any new code points. Although this choice limits the type and number of emoji that can be released, it allows for additional skin tone support for couple emoji, as well as to add new ones that can be created using a sequence of existing code. For instance, the upcoming "Mending Heart" is a combination of the ❤️ and 🩹 emoji, resulting in a new one that represents a heart with bandages over it.

The upcoming glyphs include a face in clouds, a mending heart, new gender options for the bearded emoji, and skin tone options for the couple emoji. As these are still draft candidates, the final versions may differ from the ones shown above. Lastly, the 😵emoji will now be fixed to show X-eyes on all operating systems, while a new one with a spiral-eyed face will be created. 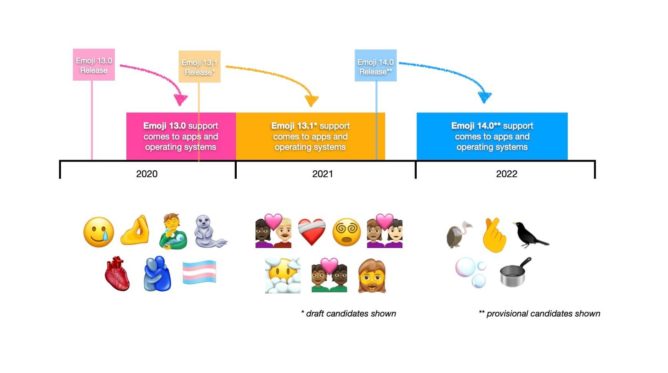 Although these new emoji should be released in October 2020, they probably won't make their way to phones before March 2021 or even November 2021 for some devices. However, Emojipedia confirms the 117 emoji that were approved in January 2020 are still meant to be deployed on most phones during the year.

EVE Echoes is finally coming to Android on August 13