An internal T-Mobile document pictured below states that starting August 4th of this year — mere weeks from now — T-Mobile will require all new devices on its network to support Voice over LTE (VoLTE). Existing customers with a non-compatible phone won't be immediately impacted, but starting in January 2021, smartphones without T-Mobile VoLTE support will no longer be able to use T-Mobile, possibly at all. Affected customers will receive a text informing them of the change "in the near future." 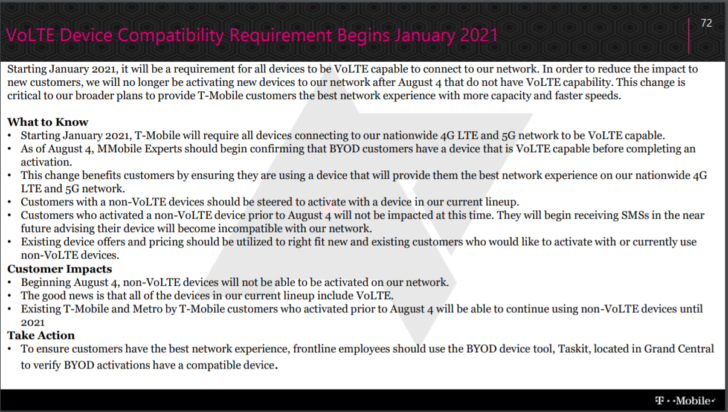 T-Mobile provided the following statement when we asked it to verify the authenticity of the document pictured above, in which it admits (in a very annoyingly roundabout way) that legacy voice networks will be going offline at some time, and new phones activated on T-Mobile going forward must have VoLTE.

We’re making great progress building a truly transformative nationwide 5G network. As part of that, we will be phasing out some older technologies over time to free up even more capacity for LTE and 5G. In preparation for that and to give customers the best experience, those activating new lines at T-Mobile will need a VoLTE capable device, which is all we've offered for years now and represents the overwhelming majority of devices on the network.

When we pressed T-Mobile to confirm the actual 3G shutdown timeline implied by this document, a spokesperson would not offer useful further comment. While we can't say for a certainty that non-VoLTE compatible phones will get kicked off the network in January, T-Mobile would likely move fast to correct the record if it felt the above information misrepresented the situation. By not doing so, T-Mobile is all but saying the document is accurate.

The move to VoLTE-only voice will also affect T-Mobile's MVNO, Metro, formerly known as MetroPCS. It's not immediately clear when the move will apply to other MVNOs using T-Mobile's network, like Mint Mobile, Google Fi, Ting, and Consumer Cellular, but it's likely they're on a similar timeline, as this is a network-level change they'd have no real way to mitigate. The impact on Sprint customers is less clear: T-Mobile promised to preserve Sprint's 3G network for 3 years post-merger, and that promise clearly doesn't jive with this January 2021 timeline. It's likely T-Mobile will just push Sprint customers hard to upgrade their phones regardless, because T-Mobile wants to get on with the process of fully merging Sprint's network with its own and get customers off the legacy CDMA as soon as possible.

How do I know if my T-Mobile phone supports VoLTE (Voice over LTE)?

While T-Mobile doesn't have a whitelist system for allowing VoLTE like AT&T's, the fact still remains that many phones are incompatible with T-Mobile's implementation (or the manufacturer simply never added support). The new requirement will mostly affect customers using select imported phones from companies like Xiaomi or Huawei, in addition to older phones. This could also have an effect on tourists: T-Mobile's prepaid travel SIMs for foreigners will now only work if their smartphone supports the carrier's VoLTE profile.

Most unlocked phones sold in the United States have supported T-Mobile's VoLTE profile for years — even devices as old as the HTC One M9 and LG G2 are compatible. Forcing people to purchase new phones during a global pandemic when unemployment in some areas of the United States is as high as 20% still isn't a great look, but it remains to be seen if T-Mobile will offer discounts on new devices for affected customers.

How to install the Google Play Store on any Android device