If you happen to own a device without the Google Play Store installed, getting it up and running is a little trickier than just downloading an APK file and pressing a button. In this guide, we'll attempt to show you how to install the Play Store using a series of steps that may work for your phone or tablet, depending on just how old (or odd!) it is. We can't guarantee these steps will work: there are simply too many devices and versions of Android to account for in a single guide, and too many reasons these steps might fail for a particular combination of them. But if you want to give it a try, we think this is a good place to start.

So, how do you get the Play Store onto an Android device that didn't come with it? While it would be impossible to create one guide that covers every situation and device, this tutorial might help you get the Play Store running on uncertified hardware. Some devices require more complex workarounds, like Huawei's flagship phones, so we can't guarantee these steps will work for everyone.

Are you trying to install the Google Play Store on an Amazon Fire Tablet? Please use this dedicated guide, as it has more specific instructions for Amazon's tablets.

Of course, there are some caveats to this process. Devices that don't come with the Play Store pre-installed won't pass Google's SafetyNet checks, which means some applications won't work properly (like Google Pay) or can't be installed at all. Other strange issues could crop up, depending on what version of Android you're running, but there's no way to know for sure what will work until you try.

As previously mentioned, this guide isn't a complete tutorial for every kind of Android device out there. It's very possible you will reach the end of this guide and still not have the Play Store functional. If you want to save yourself some time and (possible) frustration, there are some alternatives you can try first.

The best alternative to the Google Play Store that generally works on all devices is the Amazon Appstore. It has most of the same big games as the Play Store, as well as a decent collection of third-party applications, all without the need for Google services. However, you won't find any Google apps like Chrome or Gmail on the store. You can download the Amazon Appstore from here. 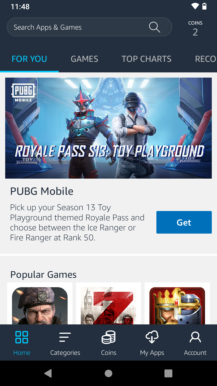 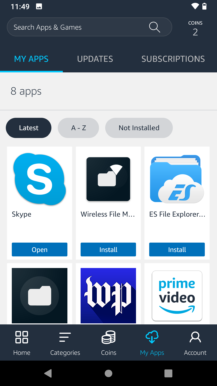 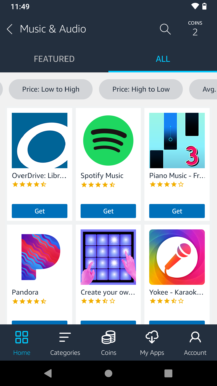 One more alternative app store is F-Droid. It's entirely composed of open-source games and applications, so the selection is extremely limited, but there's a chance it might have something you are looking for. You can browse F-Droid's library and download the app store from the official website. 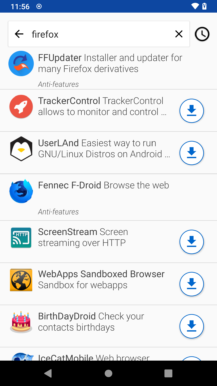 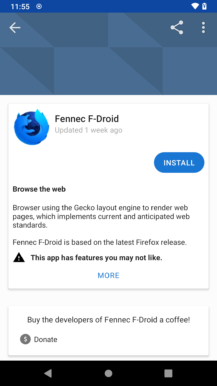 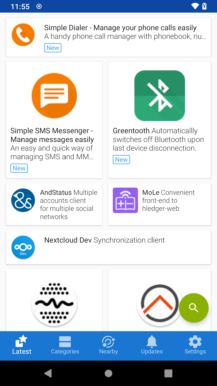 Finally, if you just need a handful of apps, and automatic updates aren't super important, you can always try downloading the applications you need from APKMirror. It's a repository of Android applications mirrored from the Play Store — the apps are safe, and not modified in any way.

If you absolutely need the Play Store, you can try your luck with the following instructions.

The first step in this process is enabling apps to be installed from unknown sources, if the option exists on your device. This allows you to open and install applications from downloaded APK files, which is how we'll get the Play Store running.

Open the Settings app on your device, and if there's a search feature, type in "unknown" and look for an option for "unknown apps," "unknown sources," or something else along those lines (some manufacturers change what the option is called). If your Settings app doesn't have a search function, the option should either be located in the Privacy or the Apps & Notifications sections, depending on your version of Android. 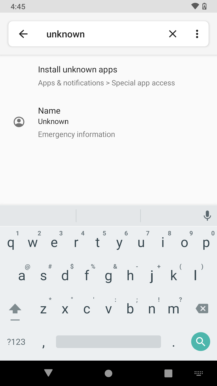 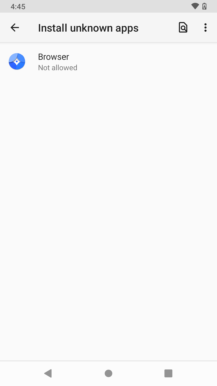 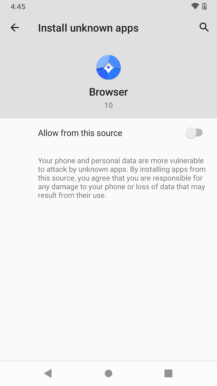 Older versions of Android have a simple switch for enabling unknown sources — make sure it's switched on, if that's what you see. If you see switches for each individual app, like in the above screenshots, don't worry about enabling any of them right now.

The exact files you need to install the Play Store on your device depend on your Android OS version and your device's hardware platform. While the OS version can usually be found in the Settings app, it might list information about your device's specific software instead of the general OS — for example, Fire tablets only display the Fire OS version, not the core Android version. As such, you should use a third-party tool to find both pieces of information.

The quickest method is to use WhatDevice, a web application that tells you information about your hardware and software. Go to whatdevice.app on your Android device, and make a note of the Android version and CPU architecture. The architecture should say something like "armv8," "armv71," "x86_64," and so on. 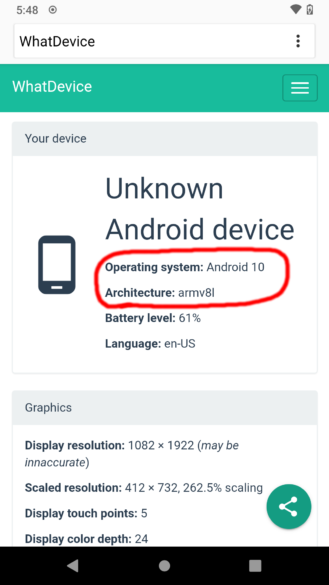 If WhatDevice isn't displaying the information you need (some browsers hide the required data), an app called 'Device Info HW' will do the job. It's available from the Play Store, but since you don't have that yet, you'll have to get it from APKMirror. Go to the app's APKMirror page here on your device, click on the latest available version, and press the big 'Download APK' button. Once it's done downloading, open it to install the APK file.

After Device Info HW is done installing, open it. Make a note of the Android version on the main General tab, then switch to the 'SoC' tab and check what is listed next to 'ABI.' It should be an architecture like "arm64-v8a," "x86," "armeabi-v7a," and so on. 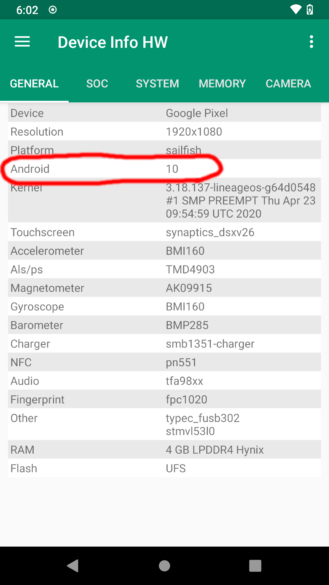 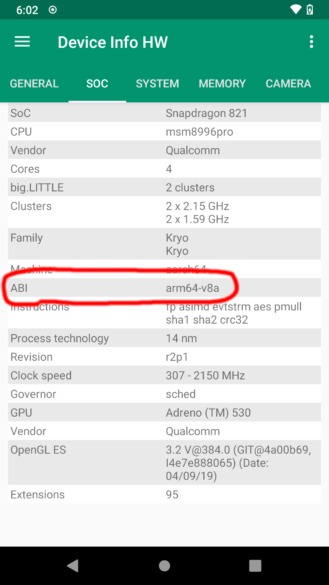 Regardless of which method you used, you should now have two pieces of information: your Android version, and your CPU architecture. Now we can get on with actually installing the Play Store.

The next step is to download the proper APK files for the Play Store. You technically have to install four different applications — Google Account Manager, Google Services Framework, Google Play Services, and finally the Google Play Store. The first three apps handle basic account services and APIs, while the last app is the store itself.

If you're not already reading this on your Android device, open the web browser and type andp.lc/playstoreguide into the address bar to jump straight to this post. 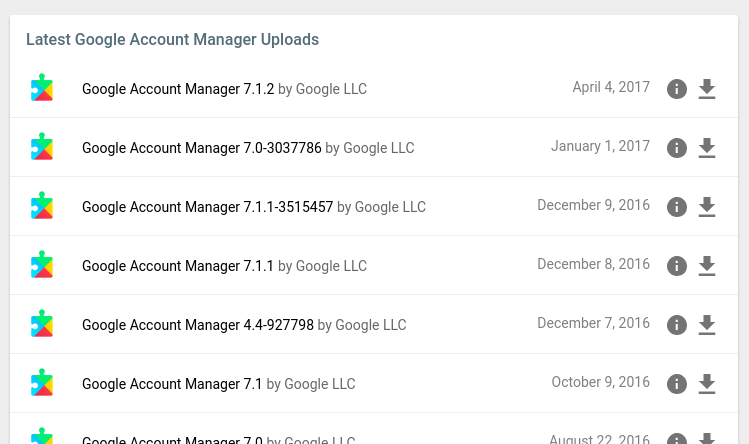 Next is the Google Services Framework. This is mostly the same process as with the first app, just go to this page and select the version that most closely matches your Android OS version. For example, if you have Android 8.1, you would pick Google Services Framework 8.1.0. After the APK file is done downloading, do not open it — we'll do that later.

Now it's time to download Google Play Services, which provides most of the behind-the-scenes functionality for the Play Store. This is where things get a little tricky, as there are different versions depending on both the Android OS version and your hardware architecture. Go to the APKMirror page for Google Play Services and select the latest release that isn't marked beta.

While the APKs for the last two applications usually only have one variant for each version, there are specific variants of Google Play Services for every imaginable hardware configuration. Here you have to find the combination that matches both your Android OS version and your hardware architecture — the pieces of information you found earlier. 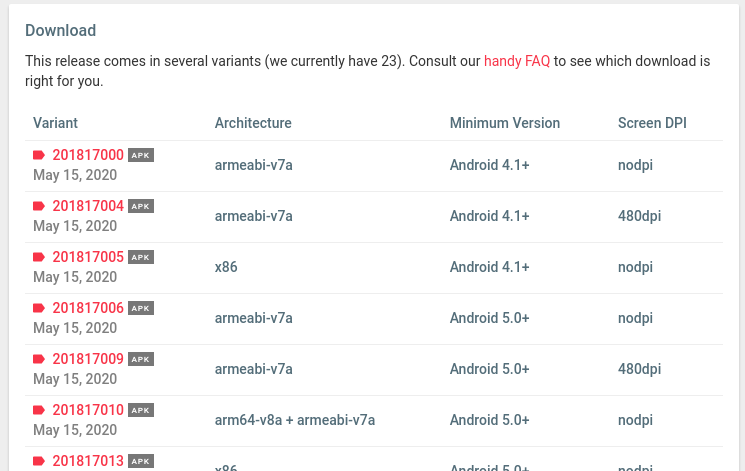 For example, my Google Pixel is running Android 10 and uses the arm64-v8a architecture, so I would pick the APK for "Android 10+" and "arm64-v8a + armeabi-v7a." The plus symbol means it works on both listed architectures. Once you find the variant for your device, select it and download the APK. Again, don't open it after you're done downloading, because we'll do that later.

The last app you need to download is the Google Play Store itself. Thankfully, Google distributes the Play Store as a single variant that works on all architectures and Android versions, so just go to this page and download the latest version that isn't marked as "beta." After the APK file is done downloading, do not open it — we'll do that later.

Now comes the final step: installing the Play Store. Find the Downloads/Files app on your device and open it. If you don't have a file manager, download the latest version of Files by Google from APKMirror and install it. You should see all four APK files ⁠— if not, go back and figure out which one you missed. 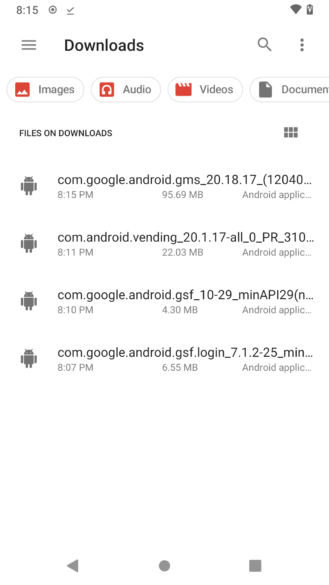 The four APKs ready for installation

Open the apps in the below order, and when the installation is complete, press 'Done' and not 'Open.' Installing the apps out of order will cause the Play Store to not work. Also, if you have an SD card, make sure to take it out during these installations.

Once you have installed all four apps, reboot your device. If one of the applications didn't install, it means you probably downloaded the wrong APK variant — go back and make sure you properly matched the CPU architecture and Android version. If your device has the arm64-v8 architecture, try downloading the variant for armv7a. Some low-end devices (like Amazon Fire tablets) have arm64 processors, but run Android in 32-bit armv7 mode.

If you can open the Play Store and sign in, pat yourself on the back, you did it! Now you can download all the apps and games you could ever want.

If the Google Play Store isn't working, or you get alerts about Play Services crashing, it probably means it isn't possible to get the Play Store functioning on your device without more complicated steps like rooting or installing a custom ROM. If you can't get it working, go to the 'All applications' section of your Settings app and uninstall all four APKs, to prevent further popups about crashing (and potential battery drain issues from Play Services constantly restarting).

I know, it's not fun to spend time trying to get something to work and not get the results you want, but the truth is that the Play Store only sometimes works on devices that aren't rooted/modded in some way. I recommend checking out the alternatives section at the start of this guide for some other options that might work for you.