We've extensively reported on OEMs that needlessly kill useful background processes to save battery life, creating problems like missed notifications and alarms, aborted sleep tracking, broken upload schedules, and more. While all of these issues are annoying, they're not exactly life-threatening. However, as soon as we're talking about coronavirus tracing apps, missed exposure notifications could put you or others at risk, and it looks like that happened to the German COVID-19 tracking app, which hasn't been able to alert some people due to background restrictions.

German tabloid Bild (paywalled) found out that due to manufacturer battery management tweaks, many Samsung and Huawei phones weren't receiving COVID-19 exposure notifications on time or at all, unless users manually opened the app. That's significant, as Samsung and Huawei make up more than half of Germany's smartphone market. It's likely that other, less popular manufacturers are also affected — according to dontkillmyapp.com, OnePlus and Xiaomi are among the top 4 worst offenders regarding aggressive background kills, along with Samsung and Huawei, so they might exhibit the same behavior.

It's important to note that the restrictions only affect exposure notifications, not tracing itself. That's taken care of by the Play Services and its Huawei equivalent, which are deeply integrated into the system, allowing the Bluetooth-based tracking to run continuously without hiccups. People just haven't received reliable notifications when they were exposed. Since the German COVID-19 tracing app functions similarly to others, like the Irish solution, we can assume that more applications might face similar problems. 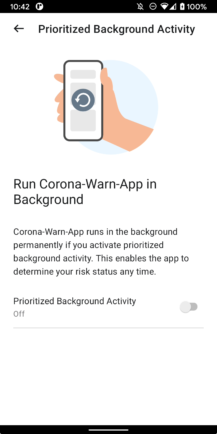 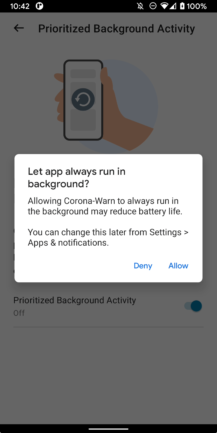 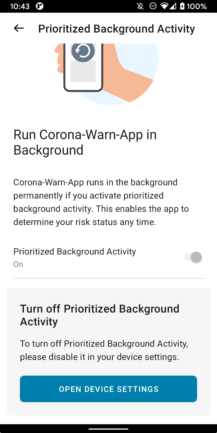 Germany has since added a one-stop toggle to allow its app to always run in the background.

The problem was easy enough to fix for the German COVID-19 app and is already live in version 1.1.1. The developers have added a toggle that lets users allow the app to always run in the background. This still means that people have to be proactive about the problem, and the developers behind the app ask manufacturers to ease background restrictions in a statement to Heise: "We are urging all affected smartphone manufacturers to adapt this accordingly without delay. Huawei, for example, has already confirmed to us yesterday that they have now corrected this configuration for the Corona-Warn-App."

This still goes to show that Google urgently needs to unify and standardize battery-saving options across Android devices. Developers need to be able to rely on standard behavior and can't always account for every manufacturer's custom approach to better battery life. As the COVID-19 tracing example shows, messing with Android's standard battery-saving features can have severe consequences.

If you use a contact-tracing app in another country, check our guide on how to allow it to run in the background indefinitely, and stay safe. 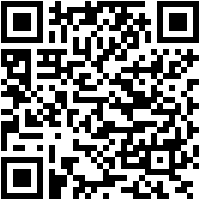